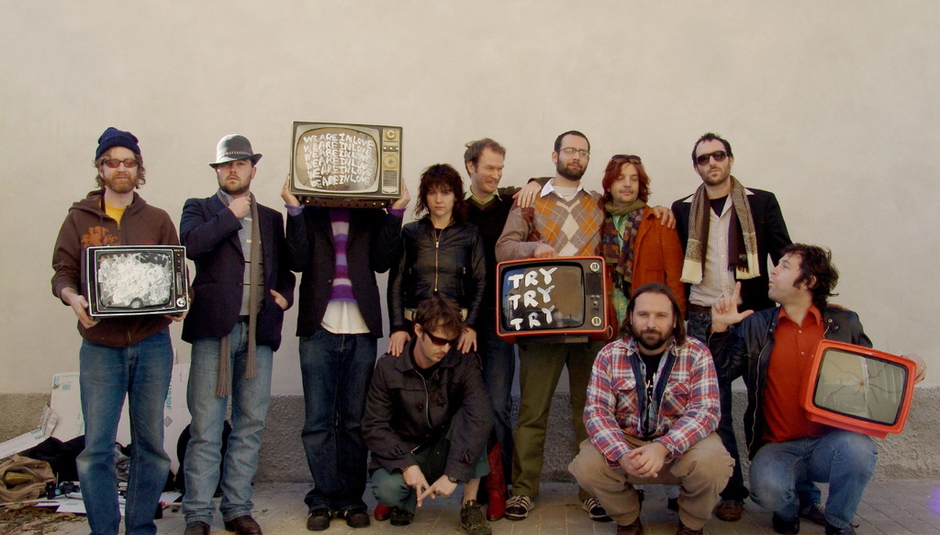 A day which has already contained good album news now gets even better. Canadian indie-rock collective Broken Social Scene are in the studio recording material for their new album, as announced by Kevin Drew in this blog post.

Posted on their website late last week, Drew details what the band have been up to and information on the follow-up to the last full Broken Social Scene self-titled LP.

First of all, we are in Chicago - Soma studio to be precise. I am happy to announce we have started recording our first record in four years and decided to do it with the one and only John McEntire. We did a one-day session with John last October and it was a perfect fit. This plan has been in the works for nine months and it has all come together quite sweetly in the moments leading up to being here…he is a hero of ours when it comes to recordings so it seems very balanced that we are here.

We spent the last couple of weeks at Chuck Spearin’s house/rehearsal space/backyard writing tunes, drinking coffees, hanging with the family...and now its time for the record button.

To be here is a departure for us since our two previous records have been made by David Newfeld...He just finished making the new most serene republic record and is now busy working with our friends from México city, the very excellent chikita violenta. He is a very busy man at the moment but we have discussed plans for the future...

Drew also spoke about a Broken Social Scene book that is to be published on July 1 this year:

Also, we had a book written about us that has come out this week.

Our friend Stuart Berman compiled the book over the last couple of years. It's title: "This Book Is Broken" and it covers the musical years in our city leading up to us getting together, the You Forgot It in People days, and the days after. It consists of interviews with the band, friends, local promoters and musicians.

He then goes on to offer a bit of wisdom about drugs, Twitter and seeking stereos for truth.

Besides that, it's onwards with music. I can't tell you what this record will sound like, who from the other great bands will be involved, but I can tell you it feels amazing to be in Chicago recording.

We're grateful and we are thankful. Enjoy your lives, avoid the instant gratification society, watch out for vampires, easy on the all the drugs out there (legal and illegal), don't ask guidance from your stereo, just ask for a little bit of truth. Also watch out for this twitter shit that has become the new thing these days...if instant communication keeps going like this we’ll have to all find our own personal shaman to help remind us how to live and there is not enough of them on this planet for all of us...

Pretty good news all round, then.