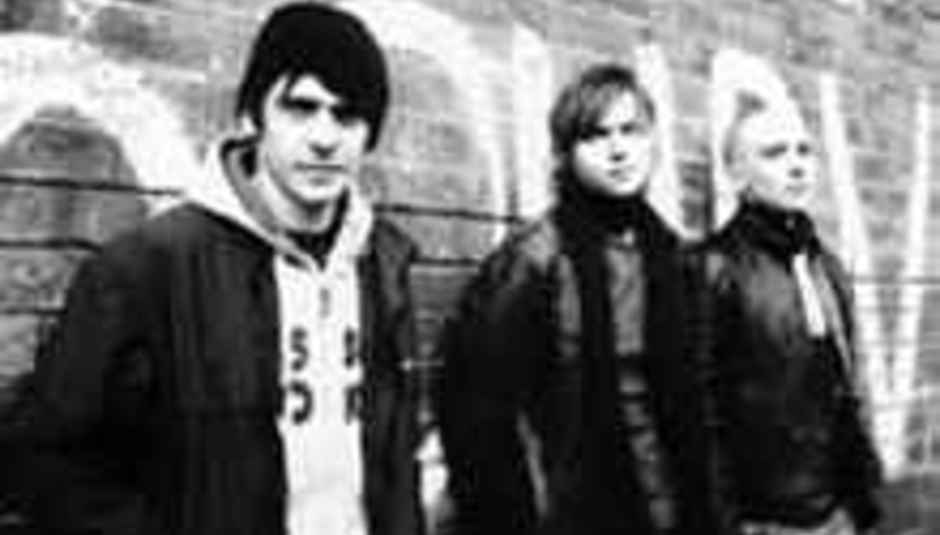 by Andrew Farley March 23rd, 2004
So… Astrid. A band you may not know but you should. Why should you? Well they’ve made two damn fine albums for Fantastic Plastic and are part of the infamous Reindeer Section – a Glasgow supergroup that was Gary from Snow Patrol’s brainchild. They’ve just got back from a tour supporting the aforementioned band and were met with rapturous applause whichever large venue they conquered. And with any luck soon they’ll be unleashing their third proper record, ‘One In Four’, in the UK (Japan and Spain already being fortunate enough to have a taster)… Oh, and then of course, there’s the 200+ people who now own a copy bought straight from the back of gorgeously vocal’ed frontman Will Campbell’s car whilst on tour.

I caught up with them back stage in their dressing room in Portsmouth’s large wedding reception like Pyramid Centre, on a Sunday night. Band member Charlie’s leg is hurting following a ‘drunken incident’ the previous evening involving the Snow Patrol collective, and Will and bass player Gareth are feeling the bruises from their Travis ‘Re-Offender’ video-style comedy punch up the same evening. Outside it’s raining and the sea is crashing heavily right next to the building we are sitting in, but inside it’s a picture of relaxation as the Astrid boys steady themselves before soundchecking.

But where have Astrid been since their 2002 full on pop effort masterpiece ‘Play Dead’? Will, sporting a shaved head, provides some insight: “Our second album didn’t go the way that we planned it and we basically started from scratch. We changed drummers and management twice and we did two Reindeer Section albums. Until all that was finished we just kind of got ourselves together again and recorded this album.”

The record was hailed as a pop gem by some critics, but record label politics coupled with the weight of expectation which inevitably surrounds a second album meant the band were far from happy with their efforts, which may in part explain the delay in getting the third album released. It didn’t take quite as long to surface as Fountains Of Wayne’s latest record, however, a comparison which Charlie Clark, guitarist, vocalist and co-songwriter and most vociferous of the band later validates: “Adam Schlesinger [from Fountains Of Wayne] was supposed to be producing 'Play Dead'. We met up with him when we were in America and he’d heard the demos, and offered to do the album. He was totally into it and he asked if he could produce the record." Gareth Russell, bass player with Astrid, emphasises, “We just couldn’t afford to go to America and record the album”.

But let’s come right up to date with the new record. Astrid have self-financed (with the money made from the Reindeer Section) a wonderful 10-track record that Spanish and Japanese fans have had the pleasure of enjoying since February. Astrid are not short of fans in Japan, where there is apparent feverish interest in all things Scottish and, in particular, things that have a connection to Glasgow. Five bonus tracks, recorded in Gareth’s Glasgow bedroom, were also added on to the Japanese release of ‘One In Four’, where extras are part and parcel. Some bands may struggle to come up with five tracks, but not Astrid, who live for writing songs. Sugar sweet pop songs may be their trademark, but those who have not heard the new record may be in for a bit of a shock. The same pop sensibilities prevail throughout the songs, but it’s much rougher round the edges than anything that appeared on 'Play Dead', and lyrically it’s extremely dark in places.

Will explains: “It was just a reflection of what was going on in the band and what was happening to all of us personally and stuff like that. If you’re going to write a song you might as well mean what you say. I think with the first two albums we were just kind of making words rhyme and being young and I think on this record it’s just growing up. It’s as simple as that - there’s no riddles to it. It was just what was happening.”

Charlie continues: “A lot of the kind of themes on the album, they’re totally about what was happening to us in the two year gap and a lot of the songs are about that and it is definitely darker because there’s a lot of personal stuff in there.”

Gareth brings in the subject of age: “As you get older you know, life doesn’t get any easier as you get older so you have your dark moments, and I think that’s what we’ve been writing about basically.”

The interview is temporarily interrupted for Astrid’s soundcheck. Will is unhappy with the sound of his vocals, so they play an extra song to get it right. Damn! Another song(!). They sound fantastic. We head back into the broom cupboard-sized dressing room, where members of the Snow Patrol collective are passing through to get to the shower, to discuss how post recording contract life is treating Astrid. Remarkably well, by all accounts. The band now own a record that they recorded themselves and had complete creative freedom over and have already successfully licensed it to two foreign territories. With the absence of a licensing deal in the UK, it's enabled the band to do whatever they like with the record here, including selling it for a cheap price at gigs to fans.

“The albums and merchandise are getting us from A to B. We’ve done the tour in a car. So we’ve totally been playing the sympathy card every night – ‘Oh, we need to get to London – our last gig’s in London! We won’t be able to eat unless you buy it!’ – And it’s really fucking worked!" Will says light-heartedly, but there are underlying truths in what he is saying. Gareth attempts to qualify this - it’s not like Astrid to come across as at all devious in nature: “I think people appreciate the fact that the money is going straight to the band. It’s the band and it’s getting them about and it’s putting food in their mouths, you know. I think people are more than happy to go and buy a record if they know it’s not going to somebody else – it’s just going to us.”

So, to recap, Astrid are one of the best bands to come out of Scotland, like, ever and their March tour with Snow Patrol has sharply brought them back into focus. Throughout the interview I learn that they have been influenced by The La’s and REM quite heavily, as well as Guided By Voices, who they all can’t stop listening to in the car. Apparently, also, only One in Four in the band doesn’t like Fleetwood Mac. I also learn that thery’re some of the nicest guys in rock, and they haven’t got a bad word to say about anyone – honest!

“Death is too good for him!” Charlie quips when the subject of Converse and suit-wearing Jamie Cullum broaches. I seem to have hit a nerve. And I thought these guys were nice! That's before we go on to discuss the fact that Daniel O’Donnell and new band member and ex-Smiles drummer Neil Payne had changed all their lives… all totally straight faced. Our stomachs begin to rumble so after an hour and a half we head our separate ways before the main event later in the evening. I shouldn't need to tell you how they performed as any of the 1,000 plus crowd will testify: they were awesome.