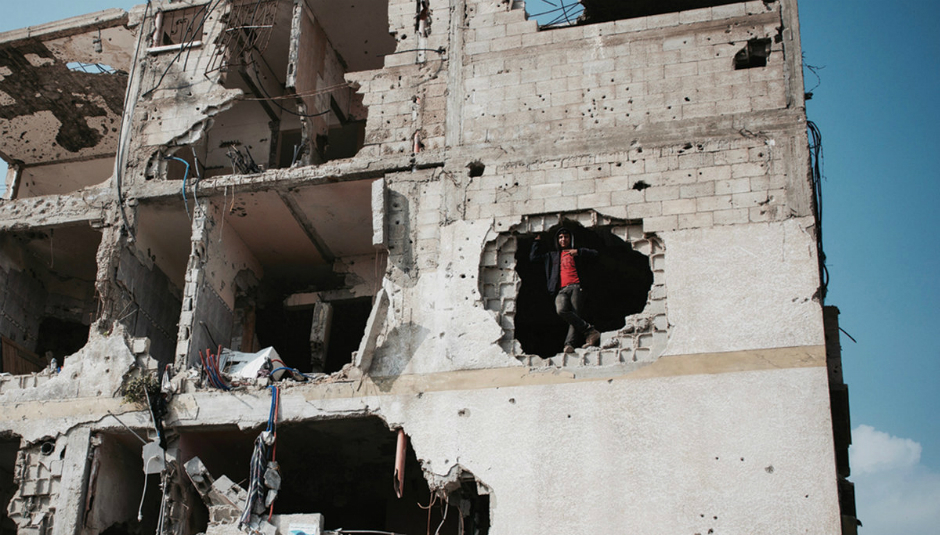 I can’t really put my finger on the reason why I haven’t yet immersed in the work of Nadine Shah. Maybe it’s because her records – for some reason – haven’t resonated as strongly where I live (Rotterdam) than in the UK. Here in The Netherlands, generally speaking, music heads still starkly equate British music to the quaint nostalgia of Britpop – probably even more so than in the UK itself – and any artist that doesn’t somewhat adhere to that sort of gets lost in the shuffle.

Admittedly, Shah’s work isn’t as easy to classify as, say, the umpteenth lad band plucking the last pubic hairs from Britpop’s withering corpse. Her work is more complex in style and form: I read she left for London at age 17 to become a jazz singer, and later dipped her toes in alternative folk and pop. The latest descriptors indicate a sharp left turn towards the fringes of post-punk and experimental rock. In other words: a restless artist, and by default, that’s a huge positive. The one thing I do know for certain about Nadine Shah: she is a great interview. Whether she is discussing subjects like her Pakistani-English heritage, the refugee crisis or mental health, she comes across as both unapologetically honest and deeply compassionate.

I like that Shah isn’t afraid to confide in her audience her own doubts and fears as well. All of her reflections reveal a deep consideration, research, and the acknowledgement that complex issues never elicit any easy answers. One thing that’s really palpable, even before taking Holiday Destination for its first spin, is Shah’s sharp wit. The album artwork depicts a photograph of a kid in Gaza standing in a war ruin, flashing a peace sign. There’s a blithe defiance and unwavering hope simmering above of what would otherwise be an image of dread. It immediately pulls you in this very specific mood and headspace for the album, and it crystallizes Shah’s personality in her interviews to a tee.

So yeah, consider me equally compelled and giddy to pack my bags and let Shah take me out for a trip. Press play.

As the name of the track suggests, indeed, Shah is intent on establishing the terrain from the get-go, a sense of place. The place in question evokes a barren desert at dawn: an ominous nimble pulse –reminiscent of African Tuareg blues – glassy textures and prodding guitars perpetuate a sense of fraught. It allows Shah’s voice to really bellow over the landscape like some kind of sun deity. The first time we hear her voice, it feels both austere and sultry, reminding me a bit of Grace Jones on Nightclubbing.

The song sort of dissolves halfway through into a more ethereal plane, with only a faint melody – sounding like the main riff of Huey Lewis’ ‘The Power Of Love’ – piercing through the static like a trapped poltergeist. This definitely wasn’t what I expected, a song closer to the amorphous psychedelics of Can than some indie rock or post-punk outfit. It gives you some sense of what it’s like to visit a war-torn place: sure, there’s a lot of blemish and ruin, but remnants of human prosperity too.

Talk about an opening riff that grabs you by the balls: the hamming up of this ghoulish, arresting aural assault evokes a sense of imminent danger. This song sounds like the most evil-infested version of Stereolab imaginable, with its corrosive guitar shards encircling you like the currents and winds of a tropical storm. Even Shah’s sprawling vocal delivery here reminds me a bit of Laetitia Sadier. For some reason, upon hearing this, I imagine some pearly white yacht being sucked in by a humongous hurricane. There is no place to run and hide in here.

On this skeletal, claustrophobic post-punkish track, Shah appears to express a familiar type of anxiety; the way the information overload is influencing our thinking and behaviour. Though I feel this track could have benefitted from more economy of words, it does aptly channel that feeling of being completely overwhelmed, the constant doubting and “reassuring.” Shah broods and even doubts her own brooding as she spirals further down the pit. There’s a lot going on sonically too, I dig those arresting, Shabaka-like sax stabs and molten guitar layers.

‘Out The Way’ extends the tense, abrasive sounds of the previous track and revs them up some more. It does that Shellac thing where a sense of futility is suggested with assembly-line machine-like repetition as the vocals build further in hysteria. This huge layer of sax and synths inject and blanket the whole thing like a huge tidal wave. This tune has that Micachu & The Shapes-like quality too, sounding like the instruments are contained in a dense metal sphere, frantically banging against the walls.

‘Yes Man’ gives the album a different pace with this dirge-like Wovenhand/Lower Dens-esque doom folk stunner. I love how Shah’s voice adds a seductive, sardonic element here, instead of just stream-of-consciousness anxiety and commenting. Metallic guitar squelches and migraine-inducting synth stabs resonate, as she declares a hierarchy where “no men” are oppressed by “yes men”. There is nothing oblique about the language; the lyrics are plain-spoken and all the nuance is in the delivery itself. Again, I love the tactile and gritty textures here, too much to take in after listening just once.

I like how this song initially leans on the absolute bare minimum of elements to create suspense. You have Shah’s throaty, world-worn delivery, the barren and monotone acoustic guitar strumming, the jagged synths. You can almost picture the serpentine scowl of a dejected Disney Queen on Shah’s face as she delivers the acerbic chorus. It’s definitely a rush once those barbed-wired guitars turn everything to shit, but this track does wear out its welcome about three-and-a-half minutes in.

Like on all the tracks on this album, there are so many strange and beautiful textures running amok here. ‘Ordinary’ utilizes a mucky piano riff in a similarly hypnotic way as Parquet Courts’ ‘Dust’. Shah once again shows what a great singer she is. There is not one moment when I feel she hams things up to pontificate the music’s intensity. It sounds, well, delightfully ordinary and au naturel; I reckon she would sing this song exactly the same way busking with an acoustic guitar in a subway or something – her words wouldn’t lose any substance or context.

This sounds so cool right off the bat. Admittedly, going into more of a free jazz-meets-Embryonic-era Flaming Lips-kind of vibe does make ‘Relief’ sound a bit out of place. But that’s actually quite a relief in this case; because this is the most thrilling piece of music I’ve heard on Holiday Destinations. Shah juggles so many elements so deftly on ‘Relief’: her voice absolutely soars and haunts, allowing plenty of space all the other instruments to flourish to the max. It sounds cliché, but this song feels like a journey from beginning to end and keeps you on your toes. Wow.

‘Mother Fighter’ is as close to anthemic as Holiday Destination gets, with a belter of a chorus: “I’m a mother and a fighter/ I can do both just as well”. Shah said in a recent interview that if she could, she’d give this album to a big star like Adele to spread its message further. She is selling herself short, because I’m not sure Adele could embody a character in a similar context as Shah does here. It’s a wonderful song, though some vocal lines remind me a bit of Interpol’s ‘Evil’. But this song, and her own ‘Evil’ for that matter, deserve just as much acclaim.

Gosh, what a closer. To put it bluntly, this sounds like Cole Porter and Throbbing Gristle had a love child or something. Again, her voice here has that Grace Jones-like gravitas, as the song’s contours very slowly take shape. This is absolutely gorgeous, the whole cavernous feel of it, with a faint insect-like buzz of synths solemnly illustrating a backdrop of death and decay. This is no postcard fantasy, this is sheer realism. But realism has its beauty too, and that’s why that whole skirmish of ominous noise and alluring jazz progressions feels so striking and urgent. Shah always keeps the song bottled up; neither side wins … only uncertainty remains.

One of the feelings that lingered after hearing Holiday Destination for the first time; it’s a more unsettling listen than I initially expected. Judging by the interviews and things I’ve read online about Shah, I figured there would be more witty, buoyant elements to counterbalance its bold, textural experimentalism and deep introspection.

Maybe there has been too much emphasis on Shah’s politics, and not enough on her artistry, talents, and musicianship? Purely based on its sonic makeup, I consider it a small miracle that it was nominated for the Mercury Prize at all. I’m also amazed Holiday Destination’s themes and message reached as large an audience as it apparently did, because sonically it doesn’t bank on accessibility. So that being said: what she has accomplished this past year is by any means more impressive than hoisting up a trophy by decree of just a few judges. Regardless of what happens on the 20th, Nadine Shah can hold her head up high.