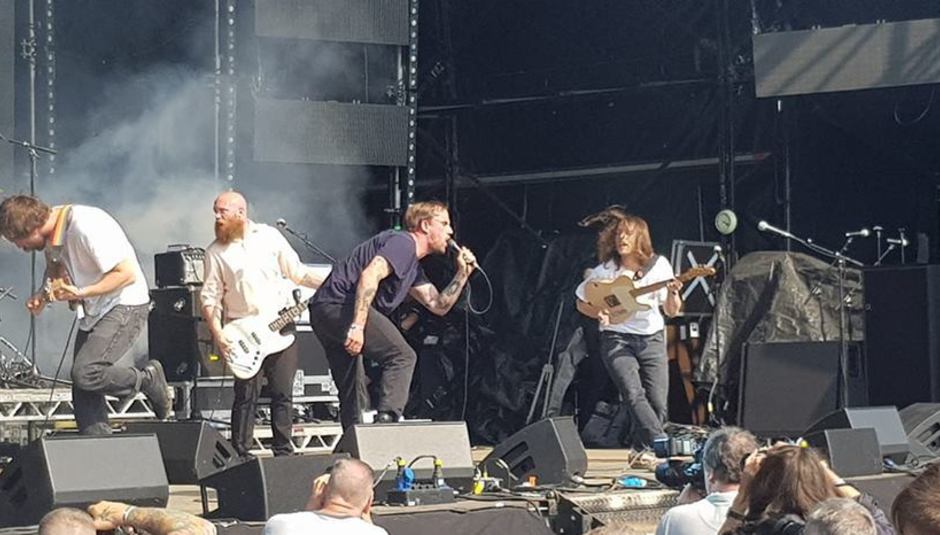 In an era where attending at least one festival a year has become a fashion accessory akin to buying a new pair of shoes, it's heartening to know some events still exist for the right reasons. Take Bearded Theory for example, one of the remaining few music festivals that can truly claim to be independent.

Having avoided the commercial route of sponsorship or branding since first opening its doors in the summer of 2008 - and picking up several national festival awards along the way - Bearded Theory has gone from strength to strength, existing on its own terms and growing at its own pace, without succumbing to the "bigger is better" manifesto many of its contemporaries adopted (and in some cases, fallen by the wayside as a result).

Situated on the grounds of Catton Hall in Walton-On-Trent since 2015, its fourth and arguably most suitable location to date, loyalty is something that runs deep through Bearded Theory's ethos, a point proven by all of its 10,000 tickets being snapped up in advance, and in turn, making it one of the few festivals to be able to boast such an achievement this year.

Speaking to numerous people around the site, it's become something of an annual entry on their calendars. Our campsite neighbours tell us this is their fourth consecutive year at the festival, while other folks we encounter over the course of the weekend tell a similar story. It is a real family affair with facilities for literally everyone from those yet to enjoy their first birthday to the ones regaling stories of their first Glastonbury four decades earlier. The Children's Village is arguably the most idyllic of its kind at any music festival we can remember, with numerous tents and activities spread throughout the day, all free of charge.

The festival itself also prides itself on promoting local business, with vendors from around the region selling a wide variety of locally sourced food and drink at affordable prices. Each year Bearded Theory has a fancy dress theme, with a competition taking place on the Pallet (main) Stage on the final (Sunday) morning. Even the heaviest of Saturday nights didn't stop a sea of contestants turning up dressed in all kinds of attire from Alice In Wonderland and elf costumes to Bigfoot.

With an all-inclusive philosophy that's a throwback to some of the Tribal Gathering and Megadog events of yore, Bearded Theory stands out from the overpopulated festival crowd. As you would expect from such an event, the music policy is about as diverse as it gets- with every generation catered for, there really is something for everyone at one time or another spread across eight stages, including a comedy tent and the late night Rogues Hideaway area where the likes of Derby-based DJ Peter Simian and Nottingham's Shookz play leftfield electronica and happy hardcore respectively until the early hours.

Elsewhere, the line up veers between both past and present with no distinctive preference towards any specific genre. Which means we get two of this generation's most relevant bands Idles and Sleaford Mods playing almost back to back on Saturday, the former actually making a reference during their set about what an honour it is to be supporting the latter. They also both draw two of the largest audiences of the entire weekend, which shouldn't come as that much of a surprise to those already familiar with their wares. In particular Idles, whose unstoppable rise over the past eighteen months looks set to continue unabated.

Beforehand, legendary UK Subs frontman Charlie Harper, celebrating his 74th birthday this weekend, informs the audience the reason they're still here is that they drink lots of beer! While that might not be the answer dieticians and medical professionals would adhere to, his band score a distinction in first wave punk classics, songs like 'Warhead' and 'Teenage' sounding as fresh as they did when first recorded nearly 40 years ago. Leicester five-piece Crazyhead, whose look and sound pre-dated grunge before its forefathers crossed the Atlantic also deliver an enticing set that rolls back the years in impressive fashion.

Away from the main stage alternative rockers Therapy? turn back the clock in style, opening with their take on Joy Division's 'Isolation' before dedicating 'Die Laughing' to the late Scott Hutchison of Frightened Rabbit. The aforementioned Idles and Sleaford Mods also receive dedications too ('Potato Junkie') and by the time 'Screamager' (a top ten hit single back in 1993) closes the set, we're left wondering why this band aren't still filling arena-sized venues.

Hull outfit Life also deliver a set of topical, spiky post-punk with singer Mez Green declaring at one point, "Fuck the Tories, Fuck Donald Trump, Fuck Brexit, Fuck the Right Wing!" While politics are at the forefront of many artists performances and understandably so in the current climate, there's an escapist vibe throughout much of what's on offer. Megadog take over the Magical Sounds big top throughout Saturday culminating in a majestic performance from Eat Static that makes the thunder and lightning storms overhead become secondary. Similarly, Astralasia's transcendental ambiance proves similarly soothing the following night when the rain clouds threaten to sully the weekend once more.

As with any festival, elements of Bearded Theory are open to improvement, not least the access problems on the first night that threaten to turn the A38 into a scene from Kris Kristofferson's 1978 epic 'Convoy'. But unlike most of its peers consumed by greed, the positives far outweigh the negatives and with eleven years already under their belt, here's to the next installment of arguably the UK's most culturally and demographically diverse festival.