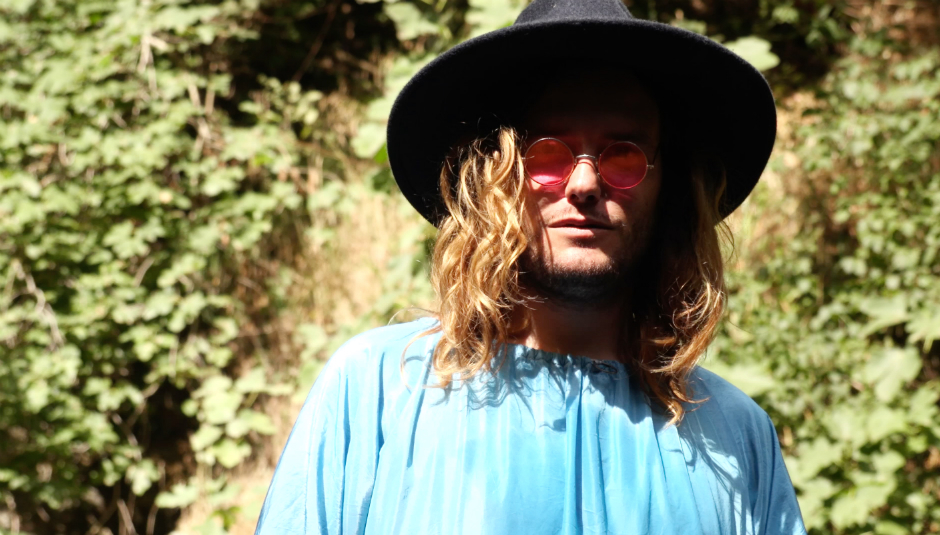 Weird Bloom, the project led by Rome’s Luca Di Cataldo, has been appearing on a number of radars in the early months of 2018. Their second album, Blisstonia, came out on We Were Never Being Boring in January, leading to a buzzy set at SXSW, which in turn was picked up by NPR’s respected All Songs Considered team as a festival highlight.

Di Cataldo has also been collaborating with Don Bolles, the producer acclaimed for his work with Ariel Pink and Germs, so we can certainly expect to be hearing more from this eccentric, 60s-fixated alternative popsmith. We spoke to him to find out more about how he came to make the music that has brought him such attention, his love of Italian animation scores and why so few Italian artists get the recognition that Weird Bloom is starting to enjoy.

DiS: People who listen to your music will be able to come up with a list of 60s bands that you’re probably a fan of. Who else are you inspired by?

Luca Di Nataldo: I’m inspired by artists and bands I would play with and labels I would be a part of. Listen to music from all over the world and I’m happy to find myself surprised by tons of good music I bump into. Recently I’ve come across Josh T. Pearson, John Maus, Starcrawlers and a band from the 60’s called Nirvana (you won’t believe that but it’s true). During the making of Blisstonia, I was digging Kimono My House by Sparks and Son Of My Father by Giorgio Moroder and overall a lot of bubblegum and bubble-glam bands like Mud but also Kevin Ayers, The Barron Knights, and The Bonzo Dog Doo-Dah Band. That’s part of what truly inspires me.

You sing a lot about very psychedelic, hallucinogenic subject matter. But is this actually covering up a deeper meaning to these songs? What kind of subject makes you want to sit down and write a song?

‘Writing good weird songs’ is what makes me sit down and write songs. I don’t really have deeper meanings – like masonry or conspiracies! – but if someone finds some other hidden layer I’m very glad to observe that what is written in those awkward lines has plural meanings. The images generated are different for different listeners.

Is there a scene of groups like yours in Rome, or do you feel like an outsider?

There’s nothing like Weird Bloom in Rome so...yes I feel a bit like an outsider but I don’t complain because I made the choice to walk on a different path and I’m quite happy. By the way, there are some good bands and weirdos in Rome I can talk with and most of them are friends of mine!

Are there Italian bands that inspired you that we should all know about?

I am really addicted to Italian 80’s cartoon TV themes. Those songs are still amazing and incredibly cool. The arrangements are perfect and performed by a crew of very well-known musicians at that time. If you are curious enough to dig this stuff, start by searching for ‘Conan Il ragazzo del futuro’ on YouTube.

Weird Bloom used to be known as Weird Black. Why did you change it? Where did Weird Black come from in the first place, and Weird Bloom for that matter?

Weird Black is a senseless name that I chose without thinking of what it could mean. Someone in the US told me that it could have been misunderstood or distorted into something racist. I suddenly decided to change it in Weird Bloom because I’m not racist at all and I don’t really want to get involved in misunderstandings. I told myself and the fans that something bloomed from the dark (from ‘black’).

Did you grow up in Rome?

Yes, I did. Rome kills you softly with her everlasting, eternal beauty. So you’re stuck, carrying the weight of this enormous heritage. There a strange relationship between me and the city. If I could speak with Rome I’d tell her, “I owe you my life but please don’t look at me that way”.

Had you been in bands before this one?

I was the singer in a band called Holidays. We dived into the very indie European music scene and I had the chance of playing shows in Italy, France, and Germany. It was crazy and beautiful and of course, we had messed it up by the time the second LP was at the doors.

Is Weird Bloom essentially you, with the others chipping in as session players? Do you write the material on your own? Do you prefer writing and playing alone?

Weird Bloom is basically me but I wrote and I still write some of my songs with other musician friends. During the years I’ve walked this path with a lot of weirdos.

Blisstonia is your second album. The first one was more of a DIY lo-fi project. Why did you feel you wanted to change that this time?

I don’t remember if I felt that I wanted to change, but something has clearly changed. I started more or less with the same lyrics and melodies, but the arrangements were just taking another direction. A new dimension made of chord progressions that were more complex than before. I’m not saying better, but a completely different approach due to the period of time I spent on another album with Don Bolles (that album is still unreleased, unfortunately).

Don Bolles’ compositions have infected mine. I'm not entirely sure I have understood and acquired that way of building songs because I’m still on that path, trying to keep the balance, but I guess I had quite good results on some of the tracks included on Blisstonia. Also, I have found a big, big helper in Richard Formby who has post-produced the tracks. He’s a genius with great taste I reckon.

You recently played SXSW, how was that? How did people respond?

It was amazing! SXSW is something crazy. Weird Bloom was mentioned on NPR as one of the most interesting live shows of the festival and the track ‘My Dear Elena's Summer Vudun’ was broadcast on NPR, who compared it to Tiny Tim and T. Rex. It was one of the greatest satisfactions of my life. Even the musicians who came with me made the experience unique. Thanks to Bruno Mirabella, Andrea 'Persian Pelican' and Lorenzo Masini. Thanks also to Samuele Palazzi from WWNBB Collective (my management and label) for convincing me to participate this year too.

What advice would you give to other bands from Italy or anywhere else that might struggle to get the recognition outside of their own country? Are there enough opportunities for artists from outside English speaking countries to get exposure in the US or UK?

I’ve always thought that two of the most important bands in the world – Phoenix and Daft Punk – come from France, so there’s the concrete possibility to get some satisfaction for artists coming from all over the world I guess. If I had to give a tip to some Italian guy who’s trying to export his/her music I’d probably tell him/her to listen to as much music as possible in order to build his/her own original taste. I guess that culture gives more opportunities than just speaking with the right mother tongue. I think of the earliest tracks of Giorgio Moroder: you could have easily recognized his Italian accent, but his huge knowledge and awareness overcame his linguistic lack. I don’t really think US or UK people care about your accent; I think people care about talent and taste.

Blisstonia is out now via We Were Never Being Boring. For more information about Weird Bloom, please visit his official website.

"I wished I’d let myself get angry mo...