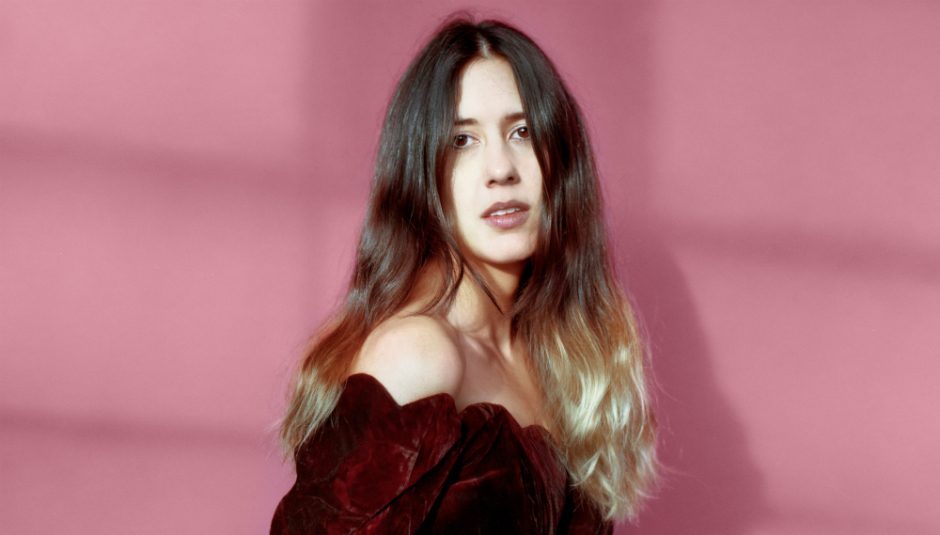 "I’m not afraid to be vulnerable": DiS Meets Half Waif

"I’m not afraid to be vulnerable": DiS Meets Half Waif

Sifting through the embers of a year, extinguished across all but a few scattered patches of colour of warmth, we find ourselves longing for either the fire or the ash. To remember the vibrancy of our hurts as brightly as the healing pleasures that allayed them, however briefly; or else to stub it out, to usher in the comfort of a charcoal totality that doesn’t hurt this much. Listening to ‘Lavender Burning’, the heartbreaking introduction to what might be Half Waif’s first masterpiece, neither suffices. It is a record that lives and breathes the ‘strange kind of loving’ that occupies the embers, the infinite split between love and loss.

Neither hope or despair prevails on Lavender, but the interstitial parts that bind them. In America, certainly, it’s hard to remember a time in Nandi Rose Plunkett’s lifetime when the two seemed so intimately tied up – not just in terms of Trump’s unedifying presidency, but the sparks that have flown from it, especially for women and people of colour. Even across intersections of privilege, how much can be borne? How much fight is one person expected to endure? At what point does the need for self-care negate the need for social justice, if at all?

“I’ve had enough of this apocalypse”, Plunkett sings, and a nation sighs with her. But beyond all political extrapolations, Lavender is a personal record; the opener is a hymn to the artist’s grandmother, who died after the record was finished. But above all, it’s an album that recognises that the personal and political cannot be separated. Who we are, how we love, how we live out our lives on a day-to-day basis, is everything that we are. It is a record that is both exhausted and exuberant, and richer for it. In conversation with the artist, it becomes apparent that Plunkett is still full of ideas and excitement, still empowered by the writers and musicians speaking truth to power. Whatever worry still floods her – floods all of us – the embers remain.

DiS: I’ve been listening to Lavender a lot recently, and it’s an astonishing record. I think you addressed the album’s themes very eloquently in the press release – that line about “small personal apocalypses that pockmark our days” was a particularly great phrase. For all the cracks and fissures, would you say the spirit of the album is predominantly hopeful?

Nandi Rose Plunkett: I didn’t feel particularly hopeful when I was writing it, to be honest! I don’t feel like I use songwriting as a tool for finding solutions necessarily – it’s more of a way to dig deep and navigate and externalize the internal. What emerges can be quite dark. So in that respect, these songs were a way of facing up to the terrors or discomforts or aches in my life. For me, the optimism came when I chose the name for the album. It’s amazing what naming something can do: it gives it a shape, an essence, and calling the album Lavender was almost this sigh of relief. It felt like a reminder, even more so because the image is so tied to my grandmother – who brought me a lot of comfort in life, and still does even after she’s gone.

My own grandmother was always saying ‘this too shall pass’, and this does feel like a record interested in states of flux. In your life as a touring musician, do you find yourself longing for more permanence?

This record was written almost entirely in the last year and a half, when I left Brooklyn and left my day job and dedicated myself full-time to being a musician – since then, I’ve been on the road more than half that time. So yes, there is definitely a part of me that is yearning for more permanence, questioning a lifestyle that so intensely challenges my love of Home, my Capricorn tendency of being a homebody. But I also know that I somewhat thrive on that instability. I wouldn’t be happy with too much routine. Placing myself in these extremes of being gone and then being home and isolated in the country gives me something to write about, I suppose. And it keeps changing the lens on my life and who I am. So for now, I’m squeezing everything I can out of that state of flux.

I’ve been obsessed with ‘Keep It Out’ and the way that it seems so strong and exhausted at the same time – there’s that line, ‘I don’t have the energy to suffice / Watch me while I disengage’. Do you feel like you’ve allowed yourself to be quite vulnerable on this record?

For sure. I’m not afraid to be vulnerable – I think there’s so much strength in it, actually. And in writing and sharing music, I want to make that connection with other people, and I recognize that the swiftest, clearest way to do that is to lay myself bare. The only times it feels uncomfortable is when that vulnerability and that sort of trust gets warped and manipulated through the Internet – when people think they know the whole you and the whole story but they don’t. So it can be a double-edged sword. But I never want to become jaded by the industry or the internet and start closing myself off. Returning to the music and to the reasons why I write is becoming more and more important for me – which is to say, for the joy of it, and for the possibility of evoking untapped emotion in myself and others.

I guess one of the positives of touring is that you’ve got to play so many shows with the likes of Mitski, Japanese Breakfast, Julien Baker – it certainly feels like an exciting generation of U.S.-based musicians. Do you feel making those kinds of friends keeps you grounded?

Absolutely! It’s been incredible to tour with artists I truly admire. I’m such a fan of all three of those musicians that you mentioned. So it’s wild to make that transition from fan to friend – or to experience both of those things simultaneously. Our tour with Japanese Breakfast is in June, so we haven’t actually met yet, but my friendships with Mitski and Julien have been really important to me. They would probably laugh if they heard me say this, but I feel like they’ve stepped into this mentor role for me at a time when I’m experiencing a lot of new things in the music industry and in this career. I look up to them a lot. It’s so great to be able to share our experiences – as women, and more generally as touring musicians – and recognize that here are the people who will understand this part of me more than anyone else.

I loved that Rebecca Solnit quote about listening that you shared the other day. Has there been any literature or essays that have particularly captured your heart recently?

I just finished The Faraway Nearby by Rebecca Solnit and loved every single second of it. She’s incredible! And yeah, that quote about listening and cultivating compassion really resonated with me. I’m going to go read everything by her now.

There seems to be some similarities between her and Maggie Nelson, who is my other favorite author right now. I read Nelson’s book Bluets last summer, in the van on tour, and it astounded me. It reads like a diary though I think it’s meant to be fiction? But that’s classic Nelson, blurring the lines of genre. Then I read her book The Argonauts, which is a fascinating look at gender theory and the many kinds of relationships that transcend the heterosexual binary. She moves easily between poetry and prose in her writing – it’s a really unique style. I love writers that play with form and structure. Solnit and Nelson both seem to do that, and they both tackle a huge array of subjects in a really elegant and engaging way.

In light of the #MeToo movement – and in terms of more microaggressive patterns like delineating a ‘female artist’ in music journalism – do you see progress being made?

I do see progress being made – there is so much more awareness and conversation happening. But I think like every revolution, the pendulum naturally has to swing a bit too far, once it gets going. So in that regard, I think right now we’re in a situation where people are scrambling to be like, “See! We have women on the bill! We are presenting an all-female showcase at this festival! Look at all the women we are working with!” And that’s not really the goal – it certainly is nice to be recognized and appreciated, but ultimately we’re just looking to be musicians, without our gender being called out and held up like a shiny thing.

That said, I could not believe it when I saw the line-up for Lollapalooza this year. Literally the first 4 lines of the poster are all male artists or bands. That’s really not acceptable. These bigger festivals have a responsibility to be representative. It’s not like bands with women, or people of colour, or queer members don’t exist – and if there are fewer of them, it’s because our culture has not supported their growth. Often these minorities are discouraged from becoming musicians (or pretty much any other thing) from a young age because they don’t see people like them doing it at a visible level. Representation is key to encourage the next generation of artists.

I know you mentioned that ‘Lavender Burning’ was written around the start of the election. With everything that’s happened, do you find yourself increasingly trying to escape from that world sometimes? Do you think self-care is important as well as facing these things?

It doesn’t feel like a brave response, but yes, I do feel like I’ve been finding ways to escape. The daily experience of terror and frustration can be exhausting. But I also recognize that not everyone is in a position where they can just escape or hide from the destruction of our planet and our country, the very real threat to our lives through climate change and lack of gun control. That’s why the term “self-care” has gotten a lot of backlash – it seems to cater to a privileged group of people who can just opt out of the fight because it isn’t on their doorstep. And in so many ways, I am a part of that group. But I think the other side of self-care is the idea that, in order to fight and protect minorities and protect our planet, we need to also make sure we are of healthy mind and body. So in that respect, it’s okay to take some time for yourself, to heal and regenerate. And then you can face the challenges with a renewed spirit.

Lavender is out on 27 april via Cascine. For more information about Half Waif, including forthcoming tour dates, please visit her official website.