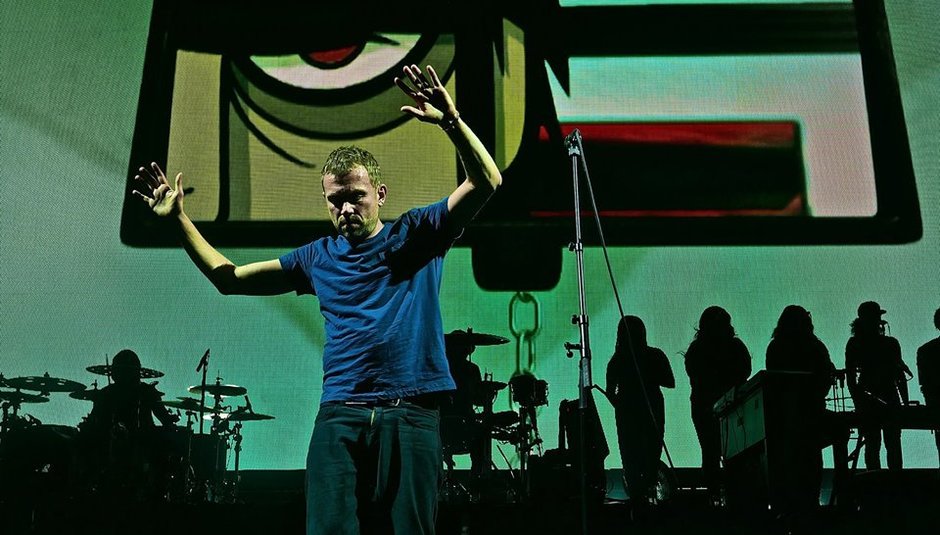 From the TfL information board at North Greenwich covered with the names of Gorillaz's myriad hits, to the gruff busker playing ‘Clint Eastwood’, the footprint this atypical band have made on our society was laid bare in the mise en scène of this raw December night. Most atypical in the sense that none of their members actually exist, being the result of Damon Albarn’s imagination and Jamie Hewlett’s inspired artwork. But their influence has pushed far deeper into our public consciousness than you suspect even they would’ve predicted. The duo have proved that the personality-centric, sex appeal-obsessed nature of the industry is not an inevitability but rather just the current accepted state of things. Fittingly the first phase of Gorillaz was boldly entitled ‘Celebrity Take Down.’

Phase four: ‘We Are Still Humanz,’ comes to the O2 with its gaze shifted from MTV and onto matters of more nuclear concern, namely the US presidency. Albarn has been quick to assert that latest set Humanz isn’t an album directly about Trump, but is instead 'a party record for the apocalypse his reign might lead to.' Super charged with ceaseless currents of chaotic energy, the new tracks electrify the set and see them fly sky high away from the calmer, murky waters of ‘Plastic Beach.’ The first huge roar from the pit of multi-coloured hair and flailing arms came for ‘Saturnz Bars,’ lord of dancehall Popcaan cavorting with menace, and the pace only quickens as the night wears on.

No longer hiding behind screens as a crouched over silhouette, Albarn patrols the stage confidently throughout and at one point even ventures into the belly of the crowd, happily leading and embracing this warped yet infectious world he’s created. Thanks to the glittering multitudes in his phone book, he keeps the excitement bubbling over all night with an endless round of surprise introductions. Sauntering onstage under a haze of green light followed by the Hypnotic Brass Ensemble came Mos Def, one of the most talented rappers to ever pick up the mic. Blitzing ‘Sweepstakes’ and then returning for ‘Stylo,’ pointing to the sky during Peven Everett’s take on Bobby Womack’s hook in reverence to the soul legend, his verses never cease to thrill and inspire. Shaun Ryder was much less at ease performing ‘D.A.R.E.,’ clearly reading the lyrics off the floor yet struggling to even do that, with the immense Roses Gabor having to guide him through it, though him merely turning up and looking lost on stage was entertaining enough. Later came another Nineties unity moment that may have stunned any time travellers from the Britpop era but has now become fairly commonplace, with Noel Gallagher and Graham Coxon entering together for the joyously upbeat ‘We Got The Power,’ giving hope to the Obama-Trump nuclear radiation benefit Christmas single in 2024. Yet De La Soul remain the most fruitful Gorillaz collaborator and once Dave Jude Jolicoeur stepped into the spotlight and cackled his infamous haunting laugh, the arena erupted and sank into the arms of ‘Feel Good Inc.’

Whilst Hewlett’s rare artistic gifts are key to Gorillaz’ identity, such a frenetic show gives little time to take them in. Damon’s constant presence and the charisma and star power of the guests who joined him inevitably led to the visual art taking a back seat, despite an immense screen spurting out a continuous flow of visual stimuli. Amid such personality, charm and glitter in reality, the four characters begin to dissolve and cynics could claim that the original ‘anti-MTV’ blueprint of the act has been lost with such a star studded line up. In cyberspace, however, Gorillaz still seem to live a healthy, motley life, which is perhaps the more fitting arena to explore Hewlett’s creations beyond an art gallery takeover. Not to be missed are the animated interviews with 2-D and Murdoc, voiced by mystery actors, featuring some genuinely funny and colourful quips and anecdotes.

Twelve long years have passed since Demon Days took Gorillaz to the height of their cultural relevance and their penetrating singles were impossible to ignore. It would be difficult to argue that they’ll ever be as potent again. Yet their mark has been made, their cartoon faces immortalised, and amidst this tumour of drab indie bands wishing it really was 2005, this electric night was a welcome venture into a strange world that is truly distinct and magical, and is more than fitting of soundtracking the apocalyptic rave of death that sounds less fanciful with each passing embittered tweet.