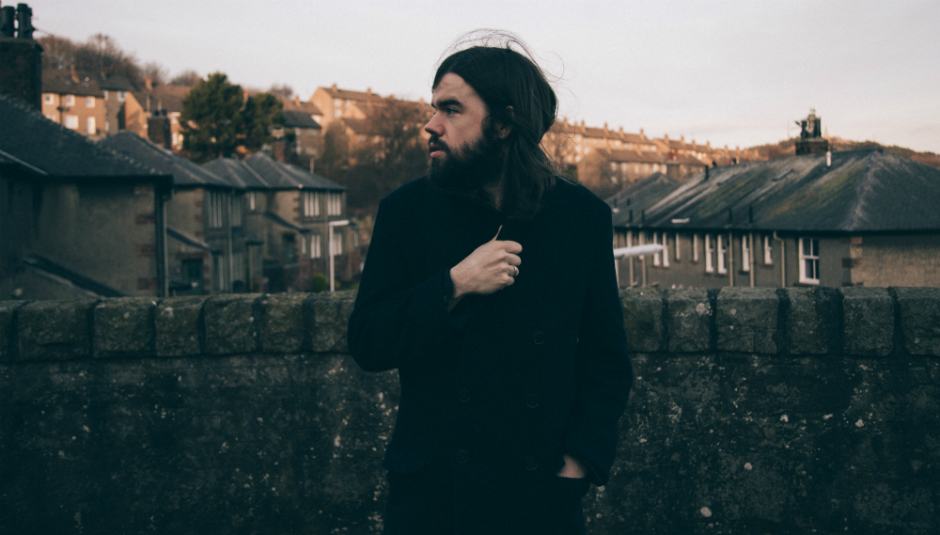 I think it’s a cloudy day in Hawkhill, though it’s hard to tell. A slow, hazy brightness envelops the landscape. In the middle distance there stands a grey stone building, roof long since gutted, an old tree looming over its derelict frame in defiance. Everything here is charcoal-grey and silent. I’ve never been to this place. But I’m staring at Joseph McKenzie’s black and white photograph of the area, taken from his 1966 collection Dundee – A City In Transition, and I can hear a piano arpeggio charting its course around the edges of the frame.

The photograph is featured on the cover of Andrew Wasylyk’s beautiful new record, Themes For Buildings And Spaces; the arpeggio belongs to ‘Drift’, its elegiac introduction. Whereas his previous outing Soroky mapped out a return to Wasylyk’s ancestral roots, the new album shines a light on his childhood home of Dundee. Once a wealthy industrial powerhouse, now rebranding with a pitch to be European City of Culture 2023, it’s the ghosts of the city’s former buildings and landmarks that the multi-instrumentalist (and sometime member of Idlewild) chooses to focus on.

If we’re calling it psychogeography, it should be on the loosest, most romantic terms: a marriage of inconvenience between the landscape and the mind, where ghosts still haunt school playgrounds and grass shoots its way between cracks in the concrete. Because what Andrew Wasylyk has created is a labour of love, an ambient soundtrack to that dislocation between past and present that rings true of life in any post-industrial town or city. More than anything, I wanted to ask him about the stories that these snapshots told.

DiS: Could you tell us a bit about the geography and the physical places that inspired Themes For Buildings And Spaces?

Andrew Wasylyk: Each composition is written specifically for a building or space in Dundee. ‘Drift’, the first song on the album, is written for a vantage point at the west end of Dundee, and it looks over the inner estuary of the Tay. To the east you have the rail bridge; west, you’ve got the North Sea. All these transient moments are happening. In my mind, there was a journey happening in there, possibly a traveller of sorts, with the ebbing and flowing of the piano arpeggio.

Then it goes through ‘Lower Dens Works’, that was for the Victorian Mill in Dundee. That was the Baxter brothers of Dundee in 1840 – 1890. They were land manufacturers, and they had these four Victorian Mills – this was when Dundee was one of the wealthiest cities in Europe, through the jute industry. So that was written to have a slightly repetitive, mechanical groove; an attempt to echo the old weaving machinery.

Then there are more abstract, ambient things like ‘The Howff’, which is a kind of burial area right in the city centre, which was given to the city by Mary Queen of Scots. ‘Ghosts Of Park Place’ is the area of an old primary school in the city. It was completely demolished, but the playground was still there, so you’d have a real sense of urban decay, which is prevalent in a lot of cities now. There are weeds growing through hopscotch on the playground, this quite eerie ‘Visitors must report to Reception’ sign just flickering away.

That fascination with urban decay was borne from my love of a photographer who worked in Dundee called Joseph McKenzie – I used one of his photographs on the front cover. It’s a black and white image of an area in Dundee called Hawkhill that was being razed to the ground in the early Seventies. Joseph had an exhibition that I saw, and it really fascinated me. So it was partly thanks to him that I was drawn to these more ambient ideas, as well as the more cinematic brass and strings that some of the other tracks bring.

The record feels quite nostalgic, almost haunted, especially with more obvious numbers like ‘Ghosts Of Park Place’. Would you say you deliberately strive to make music that’s evocative of the past?

It’s certainly a celebration of the past. I think the evolution of a lot of cities in the whole of the UK is similar to what’s going on in Dundee: the ghosts of an industrial boom. But yeah, I’m a hopeless nostalgist. Whilst it’s colloquial and very particular – there’s a song about an area I grew up in, ‘Menzies Hill’ – there’s an overarching sense of urban decay in towns, and it has a kind of haunting beauty that you’re both fascinated and a little bit horrified by.

It’s fascinating to hear about Joseph McKenzie’s influence on the album. Did any other non-musical influences come into play?

I think there’s an inevitability that aspects of it will seep in. I like Dave Eggers, Raymond Carver’s work. Art is a big influence – I love all things abstract impressionism.

Raymond Carver makes sense for me because a lot of the songs you make almost feel like short stories.

Definitely. They’re snapshots, vignettes. I’m by no means comparing myself to him, but the way you see some of Picasso’s sketches, and they’re kind of unfinished, a moment…they’re almost more evocative than some of his finished pieces because they have that “what if” factor. They have a vignette quality, that fleeting moment that’s short but also really immersive. I think as a reader and a listener, people appreciate it when they can almost subconsciously fill in the gaps themselves. And that’s when things start to resonate, you know?

I know you’ve played as a part of Art Of The Memory Palace, The Hazey Janes, and even Idlewild – are there other musicians on this record? Or do see your own releases as something personal, or even private?

To be honest, the main reason I played most of the instruments – bar the flugelhorn, trumpet, and euphonium – was really out of necessity, both through time and budget. The way I was writing was a little slow, and I guess I felt a little bit conscious about inflicting that on someone! So for a number of reasons, it was easier to do most of it on my own. On my last solo album there were other players, and again that was through a different kind of necessity: there was a drummer, and a bass player, and myself, because we didn’t have a lot of time in the studio, so we were firing out the backing tracks. It just depends on the circumstances really.

You mentioned in 2015 that you were “bad at editing”. Has your approach to recording changed?

I’m trying to never be too static, I like to learn and prove myself on each level. There’s just so much to learn. I think this album turned out okay. Editing’s always painstaking, but that was partly down to the way I went about recording it; if I was recording a band in a room performing, there’d be a lot less editing. I was playing drums as well, and I’m a bit limited when I’m behind the kit. It was a bit like pulling teeth at times!

I know you’ve acknowledged the difficulty in finding sustainability in working as a musician. Do you feel like the way things are now is working for you?

I think so. I’m certainly not comfortable. But that does give you the impetus to keep striving for different things. I don’t think you ever want to be comfortable, in creative terms. If you can stay just the right amount of discontent… I think that helps with your work. I’m always looking for the next thing. When you’re self-employed, as I’m sure you know, you finish one thing and then…there’s never a gestation period. You’re never sat there thinking: “Ahh, done that. I think I’ll just sit back and lap up the warmth of finishing an album.” As soon as it’s done, you’re like: “Shit, okay, where am I going next?”

So it’s sustainable on some level, but it’s by no means easy. I’ve got a lot of friends, whether they’re artists or painters or musicians, trying to make a living, and unfortunately, it’s a familiar story of struggling away that echoes around most of those situations. Which is a great thing if it’s a life pursuit. It’s a wonderful thing. But you’ve got to be careful to make sure that it is still cathartic, to let yourself feel rewarded. Because that’s why you started doing it in the first place, right? It made you feel good. So while you need to be looking over your shoulder to find the next thing, I think you have to let yourself feel good about something first.

Themes For Buildings And Spaces is out now via Tape Club Records, and is available for the first time on 10-inch vinyl and a limited-edition cassette. To purchase the album, click here. For more information about Andrew Wasylyk, including forthcoming live dates, please visit his official website.