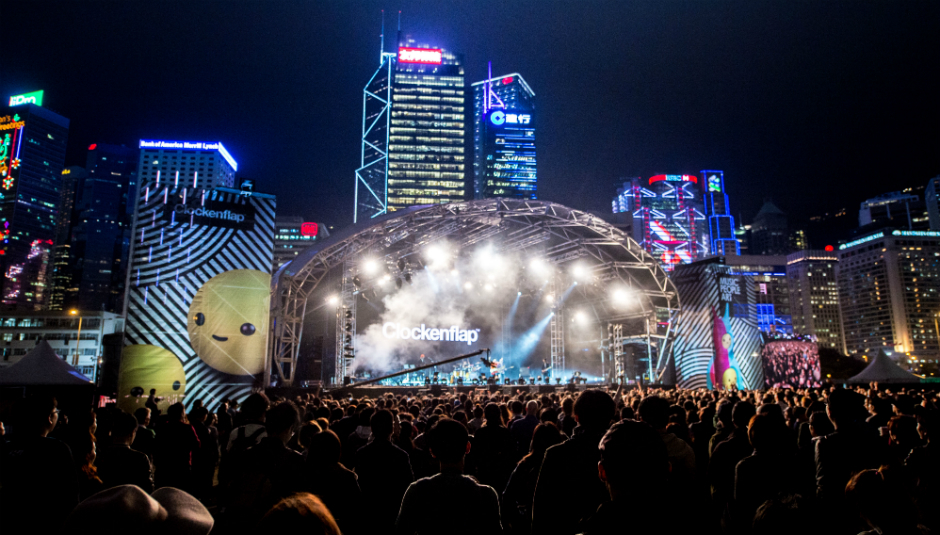 It was shortly after moving to Hong Kong when I first realised that the live music scene would take some getting used to. There was the £70 to see Belle and Sebastian in a vacuous shed out by the airport, followed shortly after by the £50-odd to watch Thurston Moore play among the incongruous soft furnishings of a modern Christian church. A few promising trips to local indie nights hit the skids when they were shut down by the police, then things started to dry up – not least the funds in my bank account.

In recent months, we’ve seen the likes of DIIV come through town, with Japanese Breakfast to follow later in the month, but these are exceptional occasions these days. Which makes Clockenflap, Hong Kong’s only bona fide weekend-long music festival, an even more important date in the calendar than it would be among a busy gig calendar.

The name is, apparently, meaningless, but to Hong Kongers, it’s synonymous with getting your annual fill of live music over the course of a weekend in November. The thought of an outdoor festival elsewhere in the northern hemisphere this time of year is enough to send shivers down the hardiest of spines, but it’s only just started cooling down in the Special Administrative Region of China, after a gruelling summer (24°C at the time of writing), making this the perfect time of year for a festival.

This year’s line-up makes for an interesting weekend: it’s got arguably the most strength in depth of any from the past few years, with a number of big-hitting headliners adding some oomph to proceedings. Among the most recognisable names on the roster are The Prodigy, Massive Attack, The Dandy Warhols, Stormzy, Temples, Slaves, Feist and, er, the Kaiser Chiefs. Picking through the international acts, though, makes for a great afternoon’s listening, and so we’ve selected 10 bands from 10 different countries that those attending this weekend should make it their business to check out.

Weather-beaten blues rock from the Sahara Desert. Tuareg exiles Tinariwen had been producing great music for almost 30 years before they entered mainstream western consciousness in 2007. Their last album, featuring Kurt Vile and Mark Lanegan, was among their finest.

A five-piece from Bangkok, Gym And Swim play sunny indie pop, with a nod to the likes of Camera Obscura, the Shins, Fun and the Beach Boys.

A New World If You Can Take It (Hong Kong)

Doomy, dreamy post-rock, a hint of Mogwai with a dash of MBV says Clockenflap founder Justin Sweeting. “Locally, ANWIYCTI are coming back to HK after some European dates just in time to make it to the festival to kick off the main stage on Friday night. Will be a momentous homecoming!”

A hip hop group from Chengdu city, Higher Brothers’ bilingual rhymes gently prod the overseas perception of their homeland. Songs which seem cartoonish on the surface pack some punch, such as the track ‘Uber’, which riffs on the shutting down of the taxi service in the band’s hometown. The lyric “I don’t write political hip-hop. But if any politicians try to shut me up, I’ll cut off their heads and lay them at their corpses’ feet” saw them shut down by censors and hauled before the Public Security Bureau.

More of a household name than the others on this list, Feist’s fifth album was quietly released to acclaim this year. Those who catch her on the strength of decade-old smash hit ‘1234’ will likely be disappointed: this pop nugget is an exception on her understated, intelligent and consistently well-crafted back catalogue.

Your fill of electro, emo, indie pop from Taipei for the weekend. Hello Nico are a big deal in Taiwan and having made their SXSW debut earlier this year, are making their mark elsewhere. This is precisely-played stuff that will have you nodding along, even if your Mandarin isn’t the strongest.

One of last year’s unlikely stars on the strength of the superb Puberty 2 album, Mitski is one of the few acts you cannot afford to miss on the line-up. A classically trained musician with a knack for candid, frank lyrics, you can catch her mid-Sunday afternoon.

Eno Williams sings in both English and the Ibibio language of southern Nigeria that gives the band its name. Electrifying Afro-beat played over electronic beats, these are – as is clear when they’re translated – socially conscious songs, about politics and tragedy (one track is about the kidnapping of 276 schoolgirls by Boko Haram) that sound urgent and vital.

Prolific French producer Onra is perhaps best known for his Chinoiseries trilogy of albums, on which he traipsed through crates of Chinese and Vietnamese vinyl to lift instrumental samples, producing sprawling collections with dozens of tracks. His promises to be one of the more interesting sets of the weekend.

An eight-piece indie band from Manila, the harmonic female front pairing of Cheats delivers consistently great harmonies. What could be a twee project is powered along by chugging guitars and snappy, smart songwriting.