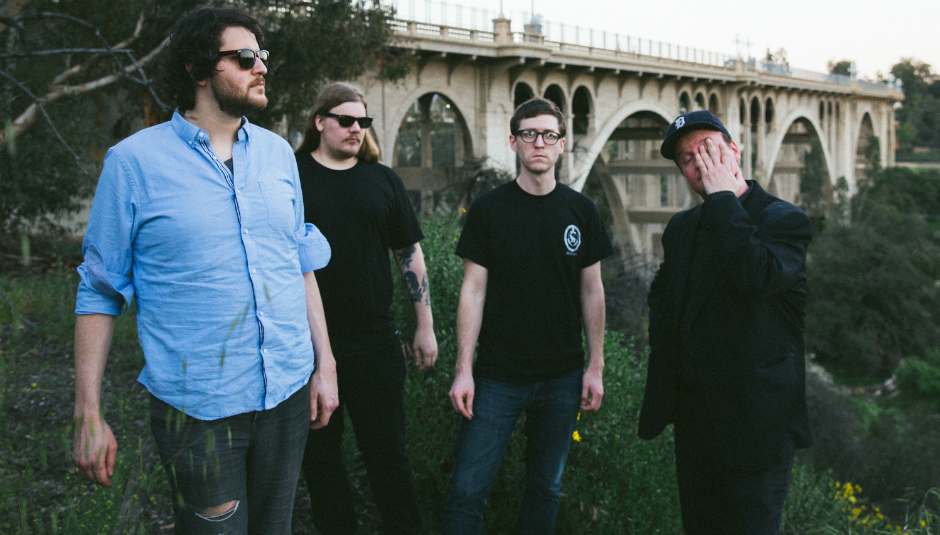 A year and a half ago I had one of those rare live music experiences that is akin to a spiritual epiphany. Surrounded by my friends and colleagues, crammed into a subterranean Sauchiehall Street sweatbox in Glasgow, I saw Detroit post-punks Protomartyr destroy everything in their path. Musically the trio of Greg Ahee (Guitar), Scott Davidson (Bass) and Alex Leonard (Drums) played tremendously powerful music, unlike anything else out there, all awkward rhythms and grooves with a muscular power to drive it home.

Frontman Joe Casey, however, was the opposite. An anomaly if you will. This wasn’t your traditional punk-rock frontman; there was no ego on display, only a man who looked like a car salesman who’s down on his luck, hit the booze a little too hard and decided to stagger on stage in front of a much younger band. But then he began to sing, and what started off as awkwardness slowly morphs into command of the stage, pushing his voice to full force only when completely necessary, giving a depth and dynamism that many vocalists can only dream of.

The show in question was in support of the band's late-2015 sleeper hit The Agent Intellect, an album that has increasingly grown in the estimation of many since its release, partly due to the live performances surrounding it. Prior to this, Protomartyr had released two albums, 2012 debut No Passion All Technique and follow-up Under Colour Of Official Right, records which allowed the band to stretch out and find their sound. While The Agent Intellect was a breakout record for them, rewarding them with a deal with Domino Records, it was a slow-burn to get there. In many ways, both in sound, age, and approach, they remind one of The National, though I'm fairly certain Protomartyr's more abrasive-yet-beautiful sound isn't going to put them on the same stages the former Cleveland band now inhabit.

However, with major label debut Relatives In Descent they have released one of the most stunning albums of the year. In a year where indie-rock stalwarts from the previous decade all returned with generally great (Fleet Foxes, Grizzly Bear, Wolf Parade) to good (The National, LCD Soundsystem) albums, Protomartyr have, according to a plethora of positive reviews – and a greater number of fans – outfoxed them all with their fourth full-length. It’s a whirlwind of a record, full of inventive turns and moments both from Casey and the band that keeps the listener on edge but enjoyably so. Everyone in the band is firing on all cylinders, which also goes for Sonny DiPerri's gorgeously warm production, bringing out the dual feelings of rage and beauty that Protomartyr so readily elicit in their music.

Casey is not your average frontman. There’s a certain caution surrounding his art that could be misconstrued as hostility. This is reasonable enough; no one wishes to feel they’re going to be misrepresented and the concept of having to repeat oneself constantly to the media is a trying one. My "time" with Casey (a phone call and an email – so not really time at all) isn't the easiest in the world, but that may well have a lot to do with the awkward nature in which it was conducted, with technology, somewhat fittingly and annoyingly, not being on our side.

He describes the process of the band's composing and his lyrics very matter of factly, cut with a sharp, dry wit and tinged with an existential dread summarised by his assertion that he’s “always been full of fear and anger. The state of the world (right now) just focuses that. This shitbag [Trump] makes my trivial gripes seem positively minute.” His lyrics are so poetic, philosophical, and at times political, however, that it's hard not to get sucked into overanalyzing them. Later on, while answering some question posed on the “nature of truth”, Casey quips: “Perhaps there is an expert on the nature of truth that could answer that question. If I could answer that I wouldn't be a singer in a mildly successful band, that's for sure.”

Even if Casey doesn’t know how to respond to my too-lofty assertions, the key thing to understanding his art is to not pin it down on to any one thing. “Anything I read probably inspires me to some extent. I don't really have a canon of writers I can point to and say: ‘These are my biggest influences.’ I mostly am drawn to writers that can recreate that effable feeling of the way the brain works. Lately, I've been finding that in Georges Simenon books, but I can find it anywhere really. Having to explain to people what every goddamn thing ‘means’ or is ‘about’ in a song is, to me, tiring and reductive.”

There’s a prevailing sense of anxiety that exists throughout Protomartyr’s body of work which emanates both from the music’s constant left turns and Casey’s stream-of-consciousness inflicted turn of phrase. He has always had a talent for it, but Relatives In Descent shows the greatest command for his poesie yet. "I try to recreate how my brain follows lines of thought, so sometimes I will be thinking of personal things and conflating them with fictionalised thoughts, like the ‘ghost from Darlington in 1963’ in ‘Half Sister’. We chose that town because our tour driver is from there and his parents would have been around at the time.” Moments like these, or references to “false news”, encourage the listener to reflect on the current state of society as a whole, even if Casey himself is understandably unwilling to answer that directly. They also remind us that the world is a scary place.

Part of Relatives In Descent’s success is how the album flows, a mad trip through a scary land vaguely resembling America which begins and ends with the same “She’s just trying to reach you” lyric. “Greg and the band think about musical themes and interlocking them. We definitely think of each album as an ‘album’, with an A and B side. We approach it that way lyrically as well. Having the music revert back to themes or moods helps me come up with lyrics to match these reoccurrences.” Opener and lead-single ‘A Private Understanding’ is perhaps the best and most evident example of the band’s prowess. The song is a statement right from its striking-yet-awkward off-kilter drum beat. It’s not a “usual” place to start a song, let alone a whole album, but Protomartyr aren’t a “usual” band, showing their increasing confidence and comfort as a band.

This week, the band kicked off the EU leg of their tour in Berlin with their 2015 tour-mates METZ and were, once again, a complete revelation. Despite a minor hiccup in the opening moments of opener 'My Children' they rise to play a perfect hour spanning right across their back catalogue. From 'Scum, Rise!' through to 'The Devil In His Youth' to 'Don't Go To Anicita' the crowd are so overawed by the experience that METZ of all people seem relatively tame in comparison. Even quieter numbers like 'Corpses In Regalia' manage to sound relatively groovy, met with a breakout of some dancing from the crowd. Meanwhile, new album's lead-single 'A Private Understanding' is just as moving and powerful as its recorded version, ditto album finale 'Half Sister'. Much like last time, the band interlock and weave in fascinating ways, each member playing with such sheer intensity that they come together to create a tidal wave.

The album has been their best received yet both critically and commercially, and it seems much of that has to do with their constant desire to “be better”. Addressing this as we wrap up, Casey tells me “I certainly hope we get better both as a band and as people. The degradation of the human spirit is a terrible thing. If we can avoid that and be humble with what we have and what we can achieve, I will continue to be happy with our output and place in the world. I know that we are very proud of [Relatives], so that helps.” One thing is for sure, as they embark on the UK-leg of the tour followed by what is sure to be a full year playing larger venues on the back of Relatives In Descent’s featuring on many end of year lists, this band’s consistent upward incline shows no signs of stopping yet.

Relatives In Descent is out now via Domino Records. For more information about the band, including current tour dates and tickets, please visit their official website.