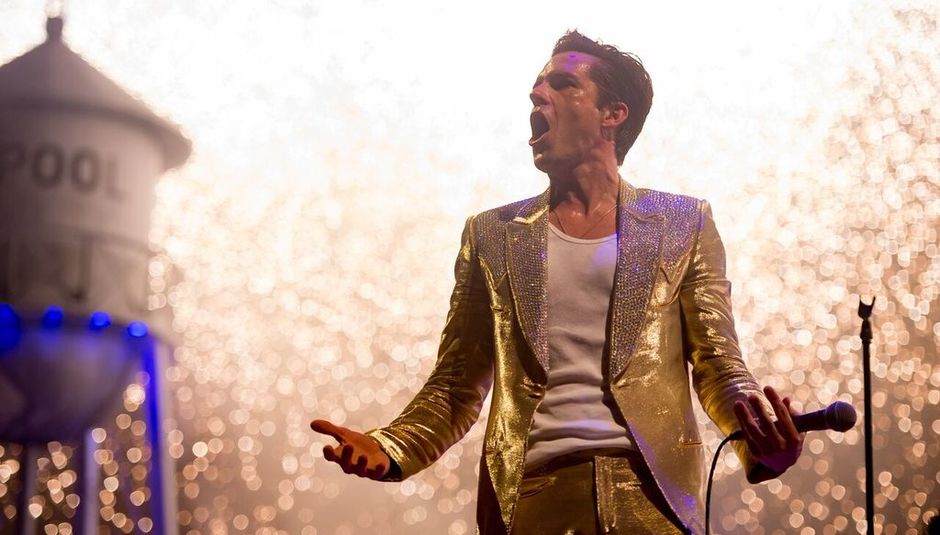 It probably says something about The Killers' prowess as a live band that almost a decade and half after the release of their first and arguably most popular album, they can still sell out hangar sized arenas months in advance. Having initially been introduced to UK audiences as the support act on British Sea Power's The Decline Of... tour at the tail end of 2003, they've gone on to become one of the most successful bands in the world. With countless arena tours and festival headline appearances under their belt, they're the musical equivalent of FC Barcelona while in frontman Brandon Flowers, possess their own Lionel Messi of sorts; a focal point for ninety minutes, full of tricks, occasionally unpredictable but thoroughly entertaining from start to finish.

Of course there's been a lot said about The Killers recorded output since those heady days when Hot Fuss arrived in the summer of 2004. Most notably, each of the four albums released since has been gradually worse than its predecessor, although in the case of record number two Sam's Town, it would be difficult to find too many faults. Crossing over to the mainstream with consummate ease, The Killers seem more at home playing to a live audience and while there's a need to carry on writing and releasing new material - if only to justify their continued existence - the key to the band's longevity undoubtedly lies in their stage rather than studio personas. 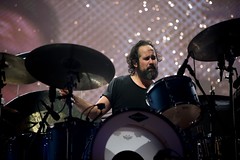 Album number five Wonderful Wonderful came out in September to mixed reviews and while it represented a slight change in musical direction - lead single 'The Man' and its dalliance with 70s disco being one glaring example - the record quickly pales into insignificance when cast alongside the band's earliest release.

Perhaps the most significant aspect of these shows is that founder members Dave Keuning and Mark Stoermer have chosen not to participate on this tour. Despite both figuring prominently in the writing and recording of Wonderful Wonderful, their decision to pursue other projects - incidentally check out Stoermer's latest LP Filthy Apes And Lions, arguably his finest solo record to date - drew gasps of surprise and outrage from The Killers fanbase, some of whom claimed this would be little more than a tribute band fronted by Brandon Flowers prior to the tour commencing.

Of course, they're wrong, particularly as The Killers have always taken a number of extra musicians with them since touring Sam's Town back in 2006. Furthermore, Jake Blanton's exceptional performances on bass throughout the band's extensive festival schedule this summer shouldn't have gone unnoticed, so while some of the personnel may have changed, The Killers slick well-oiled machine was open for business as usual.

Although only four weeks into a seven-month tour that doesn't finish until next May, they've clearly got the bit between their teeth once more, particularly after 2012's less than well received Battle Born album and the shows that went with it which threw the band's future into doubt at the time. 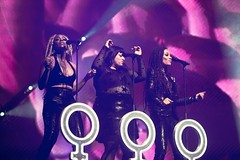 Despite not being a particular fan of arena shows - like all-seater stadiums at football, I find them restrictive, impersonal, slightly condescending, and soulless in terms of atmosphere - the Liverpool Echo Arena is definitely one of the better venues of its kind. With a capacity of 11,000 - two-thirds of it seated - it has a surprisingly intimate feel compared to other arena venues. Also worth mentioning is the sound quality which doesn't get lost or distorted at any point during the band's hour and a half long set.

Playing in front of a backdrop that changes colour and shape at various times throughout the show, the band overlooked by a water tower feature with the word "LIVERPOOL" emblazoned across it in bold capital letters, The Killers penchant for all things glittering and glamorous remains. You can take the boy out of Vegas but you can't take Vegas out of the boy, Flowers resplendent in a gold lame suit, his on-stage demeanour being that of a perpetual livewire for the entire duration of his band's performance.

As for the set itself, it's no surprise that half of the songs off the new record feature prominently, current single 'Run For Cover' eliciting the biggest response while the more familiar likes of 'Somebody Told Me' and 'Spaceman' precede it. 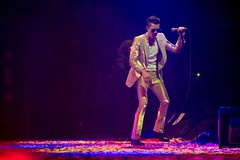 Indeed, the inclusion of five songs off their debut coincides with the biggest response, not least a rapturous run through 'All These Things That I've Done' which closes the first part of the set, culminating in the whole arena rising from their seats to join in its jubilant refrain.

More noticeable is the inclusion of just one song off Wonderful Wonderful's predecessor Battle Born in the shape of lead single 'Runaways'. A record even band themselves rarely discuss in interviews nowadays, Battle Born represented something of a nadir for The Killers, the only point during the past decade where the band's ascendancy stalled and looked as if it might fade away. So it's to their credit they took a step back and spent the past couple of years in self-reflection before returning to do what they best on the big stage.

A self-confessed Anglophile, Flowers tribute to his musical heritage from this side of the pond sees him deliver a couple of covers; the now familiar take on Joy Division's 'Shadowplay' that's been a staple of the band's live set for a number of years and a sombre yet utterly compelling version of Black's 'Wonderful Life' that splits the celebratory couplet of 'Runaways' and 'A Dustland Fairytale' in two towards the tail end of the set.

Returning for a four-song encore that includes a welcome return for 'Believe Me Natalie' alongside the customary closers 'When You Were Young' and 'Mr Brightside' that once again results in the entire room rising out of their seats, it's clear to see why The Killers remain one of the most exciting live acts on the planet today.

Read our in-depth interview with the band here.