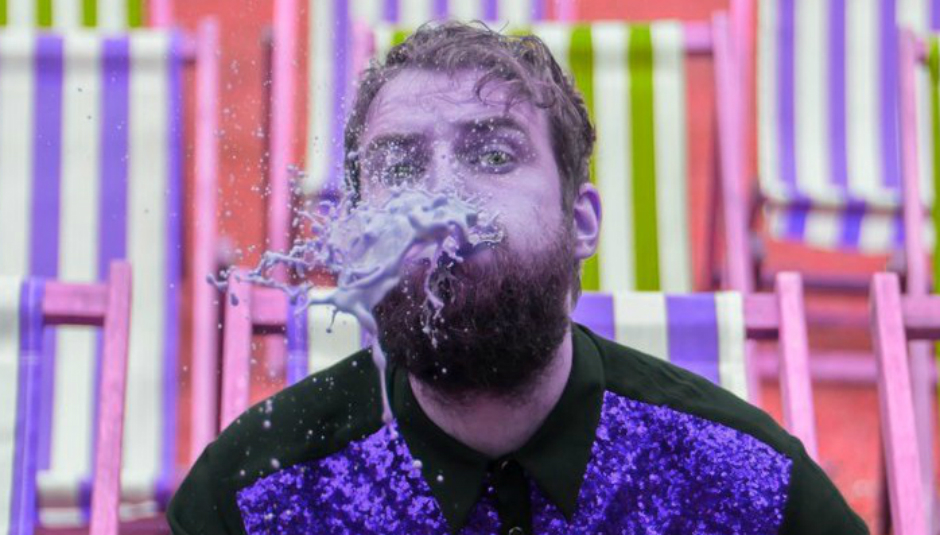 Sitting out there in the mysterious land of the Hebrides, the Isle of Eigg is one of the UK's most intriguing islands. To date, Planet Eigg's population stands at just under 100 people, most of whom live there all year round. The 12 square miles of land is owned by the Isle of Eigg Heritage Trust, who have managed it on behalf of the community since the community buyout back in 1997.

This quirky little slice of Scotland has intrigued me for a while, and one day while sitting on the couch watching the One Show chomping down my dinner like a greedy toddler, there it stood in all its glory. I watched on and quickly realised the island is home to Lost Map Records, a label founded and run by The Pictish Trail's Johnny Lynch. It's also home to the biennial Howlin' Fling festival.

Craving more information about life on Planet Eigg, DiS got in touch with Lynch, and he kindly agreed to answer a few questions about life on the island, his musical exploits, and why analogue really isn't all that.

DiS: Could you give us a bit of background into your HQ at Lost Map Records and why you chose The Isle of Eigg to set up shop?

Johnny Lynch: I visited Eigg for the first time in April 2010, and in September that same year hosted a weekend music event. I’ve lived here ever since, pretty much; it’s an addictive place - very peaceful, with a welcoming and friendly community. Trying to make a living from making music can be a stressful thing at times, as it is for anyone self-employed in the arts I guess - you never know how you’re going to pay the next bill.

Being in an idyllic location definitely helps balance the nerves. Before Eigg, I’d been living in a small fishing village on the east coast of Scotland, co-running a DIY label there with a friend. That label dissolved in 2013, and so I started a new one - Lost Map - running the whole thing from my caravan on the island. My partner and I have since built a house, and now I work from there - writing and recording my own music and helping others to release theirs. My close friend Kate runs the label with me, and she’s based down in Edinburgh, and we’ve got a wee team of people between there and Glasgow that works with us.

Could you give us a rundown of the main pieces of equipment in your studio and explain how it all fits together?

I don't really have that much stuff, to be honest. In the last five years, I’ve realised the limitations of my own recording technique and discovered that recording with other people is a lot more enjoyable. Nowadays, I tend just to record fragments of ideas at home, half-finished demos, using fairly basic equipment. When I'm on my own, I never use a laptop to record - partly out of fear of becoming sucked in by the endless possibilities that production software affords, but also out of sheer laziness.

The Zoom R24 multitrack recorder is my main device - it’s very portable, light, and easy to use. People often scoff at the use of digital recorders, but I've made lots of stuff on that machine that has been played on radio, and remixes that have been pressed to vinyl, so the quality can be really good if you persist with it. The main thing for me is that it’s a quick and easy way of getting ideas down. I’ve got some KRK Rockit 6 monitors, and a few condenser mics.

In terms of instruments, I have a Martin D28 acoustic guitar, some effects pedals, a 404-SX sampler, some Korg keyboards, a Casiotone MT-70, a Kaossilator Pro+ synth/drum machine, and a tambourine. Oh, and a shaky egg.

Has Eigg's political and cultural history, geographical location, or unique landscape shaped your music in any way?

It’s only when I look back on the music I've made here, and think about how it came together, that I recognise Eigg’s impact upon it. I don’t write songs about nature, and I can’t bring myself to write anything overtly political - but the sense of space, separation, and the freedom this place affords has worked its way into my approach. I don’t feel the need to make anything that sounds like anyone else, to fit in with any trends, or anything like that.

Tell us about a typical day in the life of Lost Map Records, if there is such a thing?

There isn’t really a typical day. I get up with my young son, we listen to the stereo in the morning while making breakfast, and I’ll answer some emails. At some point, I’ll phone Kate, and we’ll chat about what we need to do with the label, or with an upcoming event.

My son and I will go out for a walk. I’ll catch up on some admin, the accounts - if I get a chance. Then I’ll play around with the same three chords on my guitar, and maybe I'll go out for a jog. In the evening, once he’s in bed, I’ll do some Skype meetings with various artists on the label.

When I’m touring, life is different - I'll try and arrange meetings, and then focus on the gig that evening.

We live in a digital age saturated to the gills with MP3 downloads. As the founder of a pioneering micro-label, how do you see the current state of music and where do you see its future?

The internet completely changed the relationship between the consumer and the artist. When I was growing up in the 90s, you would purchase an album in a shop, or spend £10 on a CD, because that was the only way of getting to listen to it. By the late 90s, you would get together with your pals, and burn copies of one another’s CD collection. When I started running a label with my friends in 2003, broadband became commonplace in the home - and illegal file-sharing was rampant.

The difference between then and now is that streaming services have allowed the consumer to feel like they are receiving music in a legal and fair way. Back in the early millennium, you would download and share MP3s, but at least you knew that what you were doing wasn’t above board, even if you were going to do it regardless. With Spotify and Apple Music etc., people pay a monthly £10 subscription and feel entitled to experience pretty much everything. I’ve had people come up to me after shows, getting pissy because specific titles from my back catalogue aren’t available up there. I find that pretty weird.

I think the arrival of Apple Music was a big turning point: suddenly there was a credible alternative to Spotify, and that seemed to make streaming, in general, more legitimate. If people choose to purchase a physical album, nowadays, it’s more out of a sense of pity, as opposed to guilt, ha!

I don’t want to sound too down on this situation, though. I’ve recently come around to thinking that streaming can be a good thing, and with a few of our artists, we’ve seen that streaming royalties can be a significant addition to their income. With the rise in vinyl sales, people are more prepared to pay a premium price for a physical artifact, and that’s made a difference too.

The future? I don’t know what it holds for music in general, but I know that great music will always exist, regardless of what state the ‘industry’ is in. It all relies on people having ideas.

Do you believe there will ever be a full analogue renaissance?

If I’m being honest, I don’t quite understand the fascination with all things analogue. It’s become something of a marketing slogan.You know, like: “Remastered from the original 1/4 tapes, on 180g vinyl”, like it’s more authentic, or something.

So much of how music is sold hinges on how 'authentic’ the artist is, or how ‘authentic’ the recording process was. The funny thing is, so much stuff these days is mastered from digital files, and then manufactured from a digital source - so it kind of makes the whole analogue thing pointless. Pretty much all the music I have made has been created on cheap digital devices. If something sounds interesting, then I don’t care how it’s been made.

Howlin' Fling seems to be picking up momentum nicely. Do people travel far and wide to attend and what kind of people do you usually see at Howlin' Fling?

It’s a really friendly crowd. We’re incredibly lucky that the demand for tickets has always been ludicrously high, so it never fails to sell out within five minutes. If we made it any bigger it would kill it, so we’ve kept it at the same capacity.

I’d say the people who come are about 65% returning fans and 35% newbies.

What’s the most memorable thing that’s ever happened at a Howlin’ Fling?

Someone broke their leg, a few years ago - at 5 am. As there’s no hospital here, my partner and her sister dealt with it all. She’s never let me forget about that, so I guess that’s the most memorable thing. The guy who broke his leg returned this year - and he had a great time.

And last but not least, you are hitting the road very soon. What can we expect from The Pictish Trail on this particular tour?

Earlier in the year, I recorded some stripped-back, lo-fi versions of songs from Future Echoes, with my friend Suse Bear, that were more harmony-driven, and intimate. We’ve picked some very small venues for a month’s worth of shows, and I'm looking forward to performing some of these sonic re-imaginings live. Suse is coming with me, and my pal Monoganon is opening at each show - and we’re all going to play together on stage.

For the past year, I’ve been playing with a full band, and we’ve been trying to replicate the record as much as possible, but I'm looking forward to mucking about with the songs on this tour, and hoping that they are strong enough to still sound good.

As always, there’ll be plenty of daft chat. I can’t do the cool thing of rocking up on stage, playing the songs back to back and looking moody. I’m much more comfortable having a mental breakdown on stage.

The Pictish Trail are currently on tour and may be coming to a town near you. Find out where Johnny and co are playing by checking out the official tour diary.

“Music should be universal – it shoul...