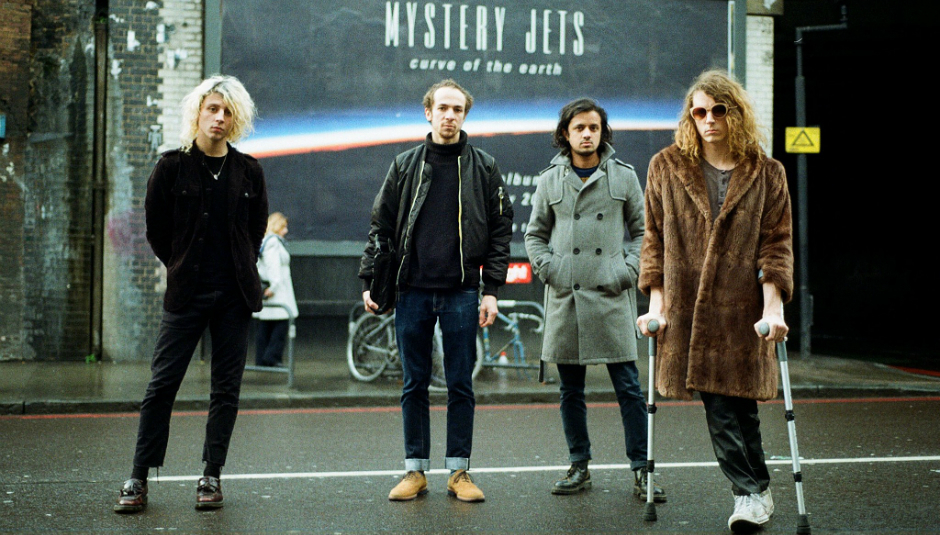 "We don't like to repeat ourselves": DiS Meets Mystery Jets

"We don't like to repeat ourselves": DiS Meets Mystery Jets

Since the early noughties, Mystery Jets have been a major player on the London music scene, forging ahead with their own distinctive brand of bright, cheery indie pop. In a similar vein, the band decided to play a celebratory residency at the Garage in Highbury, with all five albums played in full in the space of one week. Ahead of the final night of Jetrospective, DiS caught up with lead guitarist, William Rees, and the band’s most recent member, bassist Jack Flanagan, who joined in 2014, to discuss the concepts behind Jetrospective and how the band has changed in the 11 years since their debut album.

DiS: How has Jetrospective been so far?

William Rees: Every night’s had its different cast and characters in the crowd, I think because the music’s quite different, at the time they all attracted different audiences. So each night has had quite a different atmosphere and it’s really cool to witness that. It’s just nice to put the songs together again where they belong, where they were intended to be, because you don’t really ever get to do that. You make the record and then you never really play them as a whole so you don’t really know that people have appreciated it.

Jack Flanagan: Everything apart from tonight I didn’t play on, so it’s been fun learning all of the songs. I went blind for four albums so I had to learn all four. It was quite easy, I was a big Jets fan when I was a kid so I already had them down. I’d already rehearsed them in my bedroom. I joined about four or five years ago but in Jets years, I joined quite recently. It’s been great and playing Curve Of The Earth tonight feels like a real celebration, as it’s an album that we’ve all played so many times. I’ve loved playing the others.

How did the idea for Jetrospective come about?

WR: It wasn’t originally our idea, it was our friend, Dan, he’s a promoter and he came up with the idea and propositioned us. At first we were a little bit like: “We don’t know if this is the right thing to do”, or wondered if it would give off the wrong signal to people that we might be calling it a day. And then the idea to call it Jetrospective appeared – we love a good pun – and as soon as that was out there, there was no turning back. It’s actually been great, it’s been a really healthy thing to do.

JF: I think for the band as well, to write a new record and while we’re in between records, to play everything of the past and remind yourselves where you were five, ten, fifteen years ago, I don’t think many people get to do that and it’s a once in a lifetime opportunity.

How do you think the music industry has changed since Mystery Jets was formed?

WR: I would say it’s unrecognisable, it’s a completely different landscape now. When we emerged in 2005/6, it was like Britpop Part II. We had what the Brit Poppers had 10 years before us, it was exactly the same – people picking up guitars, like an indie renaissance. People formed bands and played in shitty little club nights, in central London, which is unheard of nowadays. It was an amazing period of creativity and people starting DIY labels and things like Drowned In Sound coming onto the scene, and many other things. Now there’s not a lot of that, really; I think the Internet and streaming have laid waste to a lot of it. Unfortunately being in a band has its expenses, and to make it work, for a lot of people, is very difficult. Also the world is completely different economically and politically; vast stretches of central London and Zone 1 just look like Tokyo or LA, and a lot of venues have gone. It feels like it could be anywhere. You walk down Tottenham Court Road now and you could be in fucking Singapore. But I feel like as a band, we’re not nostalgic for that time – in a small way we contributed to it and we’re part of it, but I think we’ve always been interested in exploring our own territory. The conditions of now are what they are.

WR: Yeah if that’s not there then you’re missing out on the main event. There are always challenges on the way and I think you either overcome them or you succumb to them.

How has the band’s music changed over time?

WR: There are always different concepts and themes. Every album has a different set of references, and the subject matter we’ve chosen to write about is different on each album. The producers were all different, the studios were all different. I think the music has changed vastly, but that’s how we operate; we don’t like to repeat ourselves.

How has getting older over the past decade influenced your material?

WR: It informs it. You write about what you know. The ageing process is a universal law that governs us all, and it’s actually an interesting thing to write about. Certainly our most recent album, Curve Of The Earth, was a lot to do with that. It was the first time we realised we were actually getting older; before that, we’d just been having too much of a laugh, then suddenly you get to the end of your twenties and it hits home a bit harder. The hangovers are that bit more gruelling, but it’s fuel for the inspiration and you’re faced with it, so it’s great to write about, really. It’s your honest experience of life, I suppose.

You’ve worked with a lot of bands over your career, is there anyone around now that you’d like to work with or collaborate with?

JF: Wayne Coyne. He would be a great one.

WR: I’d like to work with Blake Mills, he’s a guitarist and producer. He produced Alabama Shakes’ second record, and he did the latest Perfume Genius album, which is incredible. I’d really like to do something with Let’s Eat Grandma as well, two girls on Transgressive who make really witchy psychedelia; it could be fun to make a weird track with them.

JF: Maybe Alison Mosshart? The Kills are a great band, I think Jamie’s such a great guitarist and he plays very differently to everyone else. Our sound guy’s just been on tour with them in South America, he said it was a lot of fun. I like their last album a lot! They’re such a big cult band.

Out of all your albums, which is your favourite?

WR: That’s a difficult question. (To Jack) I want to know what your favourite is.

JF: Apart from the one that I’ve played on, I think my favourite is Radlands. I love Radlands, but I’ve got a new found love for Serotonin after we played it the other night. It was a real surprise, as out of all of the albums it was the one we were all kind of dreading. It was a weird part of it but it went really well, and it made me love the album loads. (To William) What about you?

WR: I like all of them, but the one I’ve really rediscovered this week is the first one, Making Dens. I’ve really gotten into that in this whole. And it was a really pleasant surprise; I hadn’t heard it for ages and I realised how much I like it.

JF: It’s so funny because I feel like I can imagine a Will from each era, and I love playing Making Dens, because it’s all of their madness before it had been controlled into writing. The structures were really hard to learn because nothing really repeats itself, there are all these ideas in it that you could only really have at that age and that time.

WR: It’s a bit of a first love thing, you cherish it, it can only happen once because the impression of that experience is only fresh once, and so unique. It’s cool that we got allowed to make it in that way, without anyone coming in and imposing restrictions. Another thing – I don’t know if it’s like that nowadays, but I feel like that kind of freedom isn’t quite there, probably because the finance isn’t there for bands. People have to be so economical with their studio time and pricing and music-making. That’s a shame, compared to how it was a few years back.

From your career so far, are there any defining moments that you will always remember?

WR: I think making Curve Of The Earth was a really defining moment, and finding Jack, because we weren’t really a band until Jack came on board. Our original bass player, Kai, left about six years ago, and it was a big struggle without him. We had some great musicians filling in for him in the interim, but they weren’t part of the core band setup. But meeting Jack and getting him on board gave the band its second lease of life. So that’s been pretty defining for us.

JF: It’s great, it’s a very bizarre thing, I think, the personnel change, but because we were doing an album together throughout it, it was really exciting. The whole first dating process was really easy because we spent all that time together. It wouldn’t have been the same if it wasn’t throughout an album. Glastonbury 2016 was a bit of a highlight too; there were so many people, it was great!

WR: Glastonbury 2008 was a big moment for us. It was our first ever Glastonbury and we just went at it, we partied non-stop for about three days, and the gig was on the Sunday. We all scattered to the four corners of Glastonbury and I ended up in the slumber rave. I didn’t sleep for two or three nights and then did the gig in a pink suit with a Hawaiian skirt around my top. There was no one at the stage as we got on and after we started playing the whole thing filled up. It was a really great sign at the time that the second album was making a bit of an impact, and we’d amassed this small army of fans. It felt like we were in a really good place as a band. It was a really memorable gig.