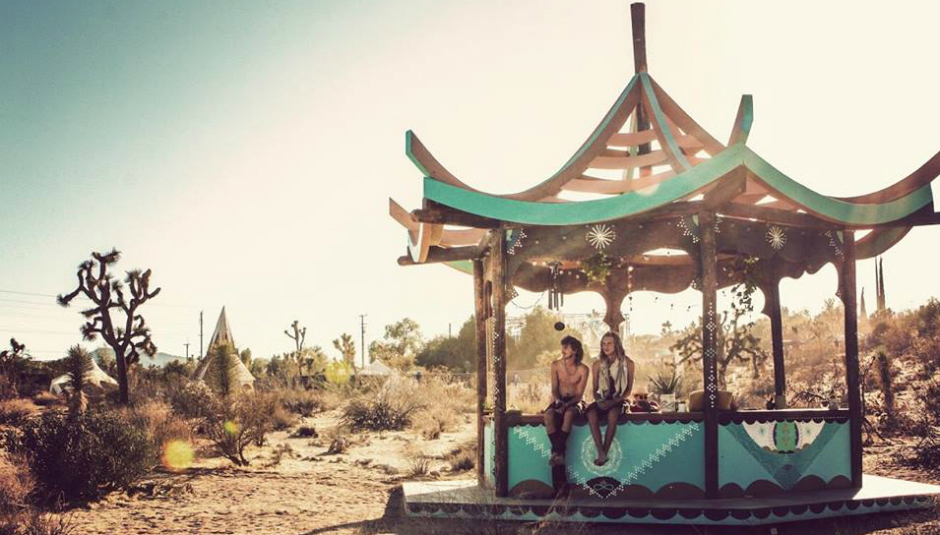 Joshua Tree, California is a placid oasis 2 hours east of L.A., a place where many have wandered to experience its ancient landscapes, explosive sunrises, and glistening midnight sky. The Mojave will become a love nest for music fans seeking an elevated festival experience October 12-15 for the 6th edition of Desert Daze. The lineup boasts everyone from Iggy Pop and John Cale to Hope Sandoval & The Warm Inventions, with the gathering a clarion call to devotees of the weird, the transcendent, and the far-reaching fringes of experimental rock and roll. DiS is looking forward to this gateway of sonic bliss and exploring not only the sounds, but the alternative art and community offerings as well. Here’s a little preview of what’s to come. Tickets and camping passes are selling quick, so hop over to the official site for the hookup.

The Venue –The Institute of Mentalphysics

Let’s start with the grounds: The Institute of Mentalphysics. A picturesque spiritual retreat home to architectural designs by Frank Lloyd Wright and son, the sacred geometry filled space looks like the future…..on a distant, barren planet. You can spot many Yucca Palms aka Joshua Trees surrounding the venue and scattered throughout the campground.

‘Once in a Lifetime’ Legend Sets

Rolling for 70 years strong, the Godfather of Punk continues to thrash and howl on festival stages across the world. Iggy Pop is without a doubt the biggest name on the line-up this year, and this set is essential to any Dazer’s experience. You can expect to hear classic Stooges jams as well as a track or two from last year’s Post Pop Depression.

It’s safe to say a large portion of the artists on the lineup are creatively indebted to The Velvet Underground. Guitarist John Cale’s appearance on the lineup is a proper salute to the 50th anniversary of The Velvet Underground and Nico. Recent setlists reveal a heavy dose of his 3rd solo venture, 1974’s Fear, as well as his baroque masterpiece Paris 1919. Cale will perform the VU’s debut LP at a series of NYC dates at the Brooklyn Academy of Music in November.

‘Over Everything’, the debut single from recent collaborators Courtney Barnett & Kurt Vile is the perfect demonstration of two worlds seamlessly combining. Barnett’s deadpan delivery effortlessly floats along with Vile’s signature guitar twang, each exchanging hazy melodies that layer into a graceful folk-pop existential meander. Desert Dazers will see one of the first live performances by the twosome. Their upcoming album, Lotta Sea Lice drops 13 October.

It’s difficult to imagine a more magical place to see Hope Sandoval live than in Joshua Tree. After spending her early career fronting Mazzy Star, she joined with My Bloody Valentine drummer Colm Ó Cíosóig in 2001 to form The Warm Inventions. Here, the arrangements are delicate, warm, sometimes sparse but always intimate, and Sandoval’s timeless vocals pierce through the dusty campfire acoustics. The group have a 4-song EP, Son Of A Lady, out now; listen to new single ‘Sleep’ above.

As a second-year attendee, I can confirm that DD delivered last year on their aesthetics. From orbital alien pods that seemingly crashed into the grounds, stone labyrinths, liquid and digital light shows decorating nearly every set, even random enclaves harboring couches and tv sets displaying reels of experimental blips…2017 promises equally satiating technicolor displays. Between the Wright Tent Stage and the Moon Stage, attendees can explore a vast art park situated next to the vendors.

Plenty of alternatives to the typical festival dance fare found here. You can experience the skeletal, ambient experimental pop of Animal Collective’s Panda Bear on Friday. Make sure to catch upcoming Aussie flower power boogie outfit The Babe Rainbow on Sunday. Prolific Soul/R&B crooner Lee Fields (with The Expressions) will play a set spanning his nearly 43-year career, the perfect sunset jams for all the desert lovebirds out there.

Returning for 2017, the Institute’s Sanctuary Hall will be transformed by an installation by Coachella Valley artist Cristopher Cichocki. His work has been called “a thermal kaleidoscope of palette and sound”, staging the industrial vs. natural to create a cocoon of bubbling neon light.