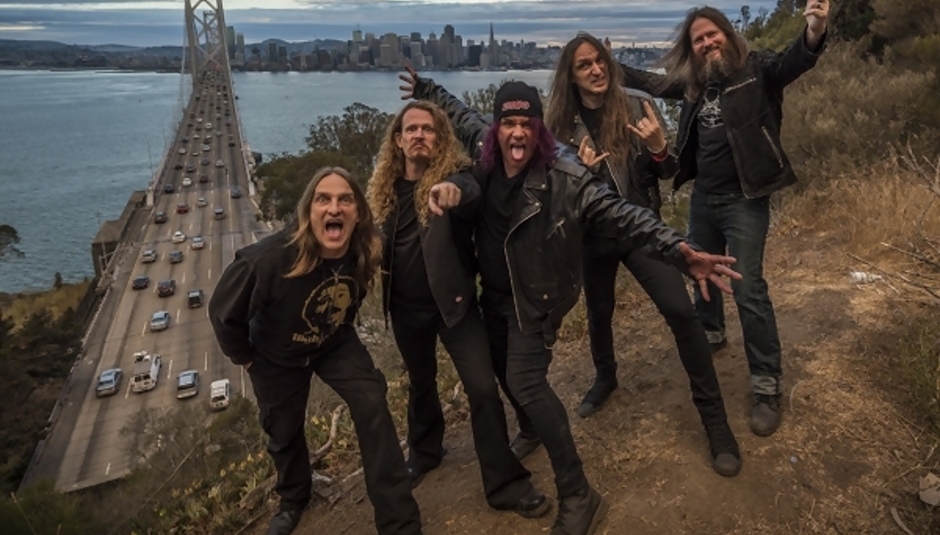 Often cited as the originators of the genre that became known as thrash metal, Exodus have become legends in their own field. Having formed in 1979, the Californian outfit's existence predates that of Metallica, Slayer and Anthrax despite not releasing their debut LP Bonded By Blood until 1985.

Since then, they've gone through numerous line-up changes and released ten albums, the most recent of which Blood In, Blood Out came out in 2014. Currently writing and recording a new LP which they're hoping to put out in the early part of next year, DiS caught up with lead singer Steve "Zetro" Sousa at both Download Festival and the recent Metal Hammer awards ceremony where Exodus picked up a Golden God for Inspiration.

DiS: How are you enjoying your time in the UK?

Steve Sousa: It’s been great playing club shows again in places like Brighton and Southend. Going back to Download was incredible and now we’ve been nominated for a Metal Hammer award too. I’m not sure what it is but they’ve told us to be there so here we are.

Is it an honour for a band like Exodus to be invited to play Download? I guess it must be considered as the number one metal festival in the world right now?

This is how I look at it. I’m 53 years old and I remember buying the August issue of Circus magazine in 1981. In that issue was a review of the Monsters Of Rock festival which took place in June. Bands like Scorpions, (Judas) Priest, Saxon – all of the killer bands from that era and the festival took place in Castle Donington. I didn’t even know if there was another festival anywhere else in the world at that point. I remember some of the ones from the 1970s too, but when Monsters Of Rock came along there was no other festival that put bands together like they did. How cool was it that you could go to one concert and see every band you ever wanted to see on the same bill? Even now there's still very few festivals that cater for metal in the same way as Download does. There's Rock On The Range and Welcome To Rockville who are doing something similar I guess, which is kinda cool. But Download is the king of them all.

Does it feel like the influence Exodus had on the metal scene is finally being given the recognition it warranted? For example, you never played Monsters Of Rock but this year you headlined a stage at Download

I guess you could say we've come around full circle. I remember Robin Trower saying that to me a few years ago. He said once I was a rock star, then I was a has been and now I'm a legend! When I look back at the 32 years we've been doing this I guess you could say we've gone through that. We've had a death in the band, all the drug problems and all our money at some point so we've hit every possible criteria going yet we're still motoring along. Which I think is testament to what we've achieved and the Rock Gods who've allowed that. I think we're wise now. Very much so.

You've gone through numerous line-up changes over the years. Does it feel like you have to prove yourselves once more every time a change occurs?

We're constantly proving ourselves with every show we play. We've never taken anything for granted at all. We've always given it everything we have. I remember back in the day our idea of a good show would be whether or not there was a load of drugs and hot girls backstage afterwards. Whereas if the show was great but there was nothing to do after we'd be switched off. Nowadays it's all about the performance. I can't stress just how important that is to me. I don't drink alcohol or do drugs any more. I'm like the most boring rock star around but that means my head is fully in the game now more than it ever was.

With ten albums worth of material to choose from, how difficult is it putting together a setlist for a live show?

That's the only time we ever argue in this band! When the five of us sit down and decide what to play off ten albums. Everyone has their own personal favourites so it can get a bit heated at times. When we go on tour we don't just play the same set every night either so these discussions will happen all the time while we're on the road.

You've amassed a whole new legion of fans as well as retaining those that saw the band in the early days. Why do you think that is? What is about Exodus that makes people that probably weren't even born when Bonded By Blood came out latch onto your music?

Why do I think people still care about our band? Because there's very few other bands making the same kind of music as us. So a lot of it is passed down from the older generation mainly because there is no real medium playing this kind of music either. You can't find any television channel or radio show that plays extreme metal. They don't exist. But what does exist are loyal fans that love this music regardless of what anybody else tells them. That's why heavy metal isn't a type of music, it's a way of life. So when I see people walking around with battle jackets on full of badges and patches with Exodus among them it makes me so proud. It's awesome. That's what we really get out of this. For us it's justification for still being able to do this after 32 years. We're very fortunate. Very blessed.

Many people cite Exodus as being the first ever thrash metal crossover band. Would you agree with that?

I think it's nice for people to say that but I don't read too much into it. San Francisco is a huge city but Sacramento is the capital, and that's how we feel when people say stuff like that. So Metallica are San Francisco whereas we're Sacramento! We've always been there if you know what I mean. We've been a staple since 1886 or whenever! I think that's how most people perceive Exodus. Thrash metal fans are very loyal. I'm not really a fan of breaking it down into sub-genres cos to me, metal is metal. Whether you're in Dokken or Motley Crue or play death metal I don't fucking care. Metal is metal and we all have the same things in common. We like it hard, we like it heavy and we move our heads to the music. There's a certain culture around us that we like. Our shirts are very violent, we all dress a certain way. It's like we have our own identity and that's metal. We don't represent anything nice. We represent everything about our music, our culture. The longevity for heavy metal is endless.

What do you think has been the key to longevity for Exodus?

You've seen a lot of changes in the music industry over the years. Do you think a band like Exodus would have achieved a similar level of success or longevity were they just starting out now?

The whole dynamic has changed since we started out. Back then we used to do a lot of tape trading with promoters and other bands. If you wanted to see a band back in the day you'd just buy a ticket for the show. Nowadays you have to log onto the internet, become a member of a ticket website, create a password, then enter a lottery with everyone else who's trying to buy a ticket for the show that day. Then people spend most of their time at the concert taking videos on their phone and uploading them on the internet the next day. I think it would be a lot more difficult for a band like ours to get recognised in the current climate, although I'd like to think because we were innovators in sound of the whole Bay Area thrash scene from the beginning that might count for something. It's interesting when people quote "The Big Four" because I honestly think - with no disrespect to the other three bands - it should really be The Big One and the other three. Because the three of those bands put together could not draw what the Big One does all by themselves. I guess that all came about from the first bands to be identified in the thrash metal scene, and there was a first tier, a second tier and a third tier. I guess Exodus headlined the second tier, and I'm cool with where we are.

Personally I think Exodus should be in the first tier alongside Metallica, Slayer and Anthrax.

Your last album Blood In, Blood Out came out three years ago. Are there any plans for a new record?

Yeah, we're going into the studio in November. Gary (Holt) has been on a break from Slayer. Him and Tom (Hunting, drums) have been writing together for the best part of this year. I have a couple of their new songs on my phone right now. So I guess we're probably looking at putting it out around March or April of next year.

Will there be a tour to coincide with the album?

Of course! This is what we live on. We've been over here five times since Blood In, Blood Out so we'll be milking the shit out of this one!

What do you make of Exodus' legacy? Are there any current bands you're particularly fond of that have cited your band as an influence?

My kids have a band, Hatriot. I was singing for them before I rejoined Exodus three years ago. My oldest is the bass player and singer. My middle boy is the drummer. Then there's Havok and Municipal Waste I really like. There's lots of great thrash bands around at present.

Have fun. Don't expect anything from it because it may disappoint you if that's what you want to do. If people come to watch you play that's a plus. And if they buy a record or a t-shirt that's a real plus. Don't take this business for granted. It's going to have its ups and downs. Don't let it discourage you.

For more information on Exodus, please visit their official website. 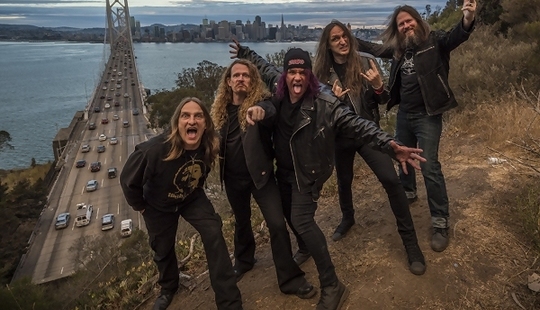