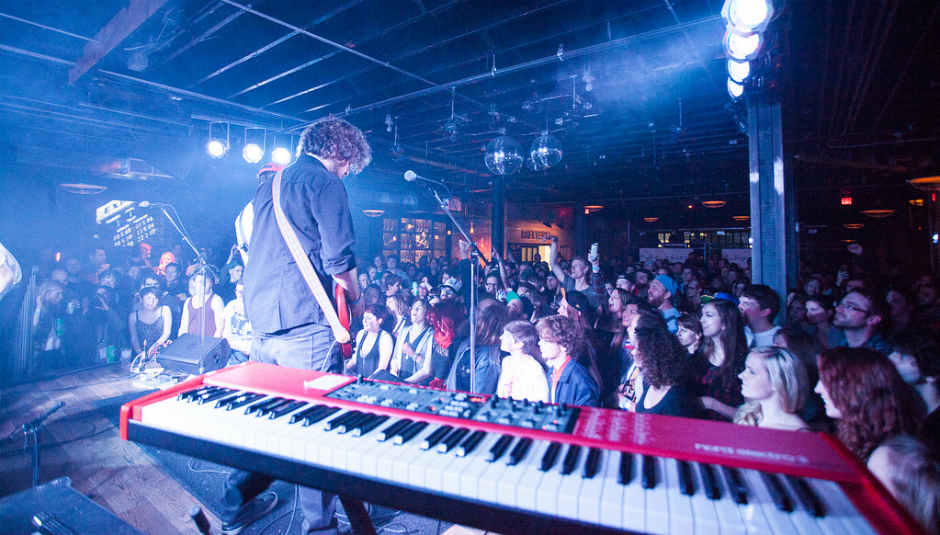 This year, DiS has been very kindly invited to Calgary, Alberta, Canada's Sled Island Festival which is entering its 11th year after 2007's inaugural line-up was curated by Mark Hamilton of Woodpigeon. Over the decade, Sled has grown to become one of Canada's most popular inner-city music festivals, choosing an artist to curate across the city's myriad downtown venues, finding a balance of genres and styles in the process. This year's iteration is being curated none of other than by Flying Lotus who has avoided leaning too heavily on his own Brainfeeder label in order to pick an intriguing undercard for the week.

Perhaps more importantly, the festival has become a launching pad for young Canadian talent looking to rub shoulders with the festival's diverse headliners, meaning it is almost expected to find your next favourite band here. While DiS is hugely excited about seeing what Canada's best and brightest as to offer, we have to admit we are also looking forward to seeing some of the more established acts at the festival too. Here are our top 5 picks for the festival:

We're slightly biased with this one, as Actress (real name Darren Cunningham) is one of the only U.K acts to be making the trip over. Selected by Flying Lotus, Actress has built a name for himself over four incredibly crafted, moody dubstep albums between 2008 and 2013. Cunningham announced around the release of his excellent Ghettoville album that he was done with the project and would be moving on to other things. However, after his three-year hiatus, Cunningham surprised everyone with a 2017 return with AZD out on Ninja Tune. His late night set on the festival's first proper day should be an appropriate end to proceedings.

This one is partly to do with the venue, but nevertheless, we are very excited to see Katie Crutchfield, better known as Waxahatchee play songs from her upcoming 4th record Out In The Storm. Crutchfield has garnered quite the reputation for her songwriting and soulful, pained performances as she blurs the lines between, indie, folk and emo. She will be performing at Calgary Central United Church, along with the likes of Low and Mono, which will surely be a transcendent experience for all involved.

Like the Boston, Massachusetts veterans we at DiS may be getting older but we still enjoy the cathartic effect of heavy music every now and then. Converge are approaching their 30th year as a band and have just finished recording their 9th, as-of-yet-untitled, full-length record due out later this year. In that time they have lost none of their trademark ferocity, as 2012's All We Love We Leave Behind suggested, even if their output may have slowed down. Converge spent the year prior celebrating the 15th anniversary of their groundbreaking album Jane Doe, with a few friends in tow, and it will be very exciting to see what effect (if any) this plays on the band's new material. While the festival may have been partly curated by Flying Lotus and also maintain a fairly familiar indie-rock stance with bands like Cloud Nothings and Wavves, it has also put its heavier offerings on the same level pegging as the rest of the festival, meaning acts like the recently reformed Daughters and Wolves in the Throne Room (both playing The Dickens Pub) equally get featured.

Despite approaching their 40th(!) year, Shonen Knife are still going strong with all the fierceness of their 80s output. The female Osaka, Japan trio continue to wow audiences across the world playing their seriously infectious pop-punk. They headline a frankly ridiculous line-up at #1 Legion on Friday night, also featuring Meatbodies and Tyvek who will be playing their second of three sets in as many days over the festival, including one at the soccer-punk themed Ship & Anchor.

Naturally, the curator is one of the main reasons for attending Sled Island, and in Flying Lotus (a.k.a Steven Ellison) they have attained one of the most interesting and idiosyncratic artists they could have hoped for. While we are still waiting for a follow-up to 2014's incredible You're Dead!, Ellison has promised an all-new, interactive 3D stage show for this tour to accompany his mad, psychedelic trappings. Let's just hope not too many of his visuals are featured from his debut gross-out horror film Kuso, as I'd really rather not see George Clinton's (real or fake) asshole blown up in 3D to end our Sled Island Festival experience, thanks.

Sled Island takes place in Calgary from the 21 to 25 June. For more information, please visit the festival's official website.

The Friday Fangasm: Beaucoup Fish by ...