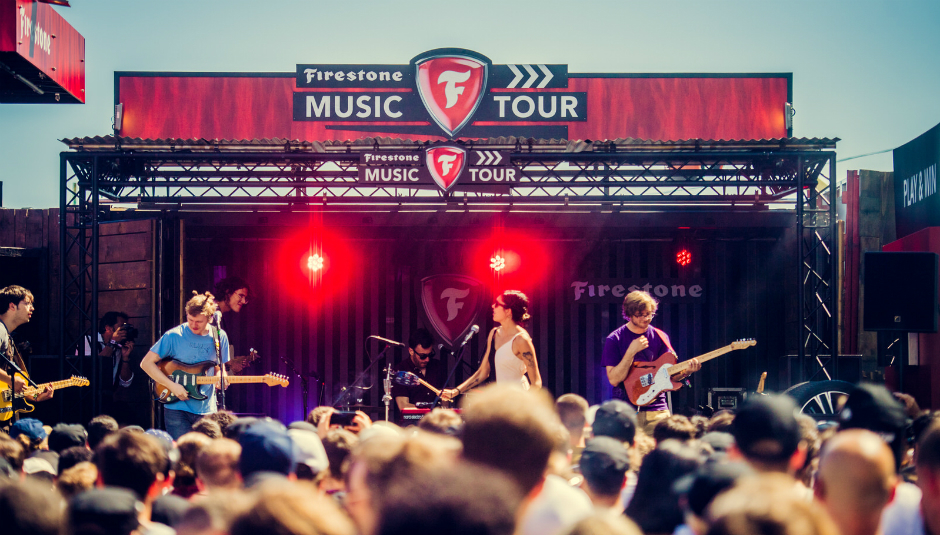 The road from Barcelona to Parcmotor de Castellolí winds through some of the most spectacular scenery Catalonia has to offer. As the Carretera Nacional A-2 snakes past the majestic peaks of Muntanya de Montserrat and through the Roques Blanques National Park, it rises to nearly 1000 meters above sea level. Dusty shrubland dominates the vistas, and everything has the slightly faded air of an old photo left in the sun too long. The air here is dry and crisp, blowing in from the West and the vast plains of Aragón. Hot too; despite it being little past 10am, the mercury is already nudging towards 30°C, the heat radiating off the concrete track and buildings.

We’re here courtesy of Firestone, who have organized a track day for assorted media and guests to try out their brand new tire, the Roadhawk. There’s over 100 people in total, split into groups, and over the course of the morning we get to try dry breaking, wet cornering, skid pan skills, and some go-karting. A bunch of VW Golf 2.0 TDIs – some with the Roadhawk tire, others with “a leading competitor” – have been fitted with various telemetry gadgets and GPS kits to measure performance, the idea being that we can see for ourselves just how superior it is. I’m the sole journalist not drawn from the ranks of the motoring press and tire blogosphere (yes, it exists), and while the others debate tread depth, water displacement, and rolling resistance (no, me neither), I’m simply excited about getting the chance to pull off some manoeuvres that would normally lead to points on your licence.

What’s all this got to do with Drowned In Sound I hear you ask? A valid question. We’re in one of the Mediterranean’s great port cities because of Primavera Sound, truly one of Europe’s best festivals and the latest stop for the Firestone Music Tour. Taking in nine festivals in nine separate countries, 2017 has really seen them ramp up their championing of new music (they’re already involved with several arenas, such as London’s O2, allowing them to invite unsigned bands to play special stages within each venue before the headliner) and efforts in fan engagement. Here they have their own stage as well as freebies, numerous competitions, a car-aoke van, and a special shuttle bus taking fans from the food court to the side of the Heineken Stage at the far end of the Parc del Forum, normally a time-consuming hike with 57,000 people milling around.

On the Thursday, indie superstars Pinegrove are in action, while Friday sees Sinkane bringing his good time afro-beat indie and sub-Saharan grooves to the late afternoon sunshine. Saturday is the turn of Jeremy Jay and his cool, studied take on bedroom pop. It’s a shame there aren’t more acts, but I’m told it can be hard persuading bands here to play more than once. Logistics aside, it’s a move that’s to be applauded; at various other festivals, they have a far greater scope for inviting more bands – and a bigger stage to play with - and they hope to expand this for the 2018 edition. Handing out hats and giving punters the chance to record their crimes against singing for all eternity is all well and good, but Firestone seem genuinely engaged in promoting talent and helping artists reach a bigger audience.

And so, back to the track. The journalists – myself included – have been herded off into one separate group, presumably because they assume we know what we’re doing. We’re given demonstration rides for each workshop – curiously, all the instructors are Italian – before we get to climb behind the wheel and let loose ourselves. First up, dry braking; basically, going from 100kph to a standstill in the shortest possible distance. Around 37.5 metres is the gold standard, and it’s fun stamping on the brakes and screeching to a halt, even if the chap from The Scotsman manages to obliterate a cone on the very first run of the day. Wet cornering is slightly more hairy, consisting of a controlled aquaplane at around 90kph. If you’ve ever sat behind a wheel in the rain and felt that drift, you’ll know the terror it can be invoke; well, it’s no different on a track, hurtling downhill towards some cones and trying desperately not to end up in the gravel. Thankfully, no one does.

Aside from the karting which, unsurprisingly, is somewhat competitive, the most fun is the skid pan; basically, attempting to go round a cone circle, in the wet, as fast as possible. “Keep it in second gear, and the revs high” is the only advice given; cue much screeching of tires, full lock, and trying not to spin off in ignominy. After each activity, we’re asked what we think of the tire, and while I’m no expert, The Roadhawk did feel a little more stable and responsive. Those who are paid to write exclusively about such matters also seemed impressed, the general consensus being that it is a Good Product that general does what it claims.

After a buffet lunch, we’re ushered towards a fleet of cars for the drive back to the city so we can see how the tire performs “in a real world situation”. We’re paired up, given maps, and told that the GPS in each car has been pre-programmed and just to follow its prompts. I end up in a Citroen C5 Estate, something that has the look and feel of a small boat, with Phil Huff for company; I take the first leg of the drive, up through the narrow roads around Montserrat to a specially organized rest stop with refreshments, live music, and (yet more) stunning views. As we go, he regales me with tales of being let loose on the roads of Europe in various high performance cars, and how rare prangs are despite them being driven to their limits. He takes over after our brief break for the long motorway ride to the city, the latter part of which is spent in the Friday afternoon traffic jam, slowly crawling back to towards the sea front.

The Friday night lineup is skewed more towards acclaimed indie, and by the time we arrive on site, we’ve already missed Mitski’s tense, deeply personal ruminations, Weyes Blood’s haunting folk, and Whitney’s simple, winsome radio rock’n’roll. We head straight for Sampha, who is tearing up the Ray Ban stage with his moody, electronic soul. Arab Strap sound immense, their beautifully crafted songs tugging at the heart strings, Aidam Moffat as gloriously grumpy and enigmatic as always. Mac DeMarco lives up to his billing as the Clown Prince of Indie Rock, constantly goofing around before stripping down to just his boxers on top of a speak stack – his drummer is stark bollock naked – and trying to set fire to his armpit hair with a lighter. It’s a weird end to the show; he has the tunes and the talent, and yet seems incapable of allowing the music to take centre stage, turning his sets into basically one long fart joke.

With the exhibitionism over, we turn and wander across to the Heineken stage and tonight’s headliners, the XX. There’s no doubt they deserve this slot – even if this year’s I See You was something a damp squib – but the risk is their downtempo, minimalistic sound is ill-suited to 11.10pm at one of Europe’s biggest parties. Sadly, our fears are confirmed. Whilst the band themselves are sharp and razor tight, the sound is too low, and it’s blown off course by the stiff breeze coming in off the Med. “This just makes me want to sleep” remarks one of the journos after ‘Crystalised’, a slightly harsh appraisal but one that seems to be shared by the people around us. Oliver Sim attempts some jovial banter between songs, but even though we’re relatively close, it’s a struggle to even make out what he’s saying. After half a dozen songs, we wander off in search of something more energetic.

It’s left to Run The Jewels to re-invigorate the audience, although some choose instead to go have their brains crushed by Swans, who have a full two hours in which to stage their sonic assault. After that, the DJs and more experimental acts takeover, and while you can dance yourself silly till 6am, we head off at a semi-sensible time. As we walk towards the exit, we pass the Firestone stage, where people are still milling about and drinking beer on its steps. Plenty of people are still sporting the red hats, and the shuttle bus is still running. Aside from the usual hyperbole and corporate sloganeering, it’s refreshing to see a brand try to do things a little differently, a little more authentically; Firestone, to their credit, are doing a better job at that than most.

Derek Robertson attended Primavera Sound on Friday 2 June as a guest of Firestone.