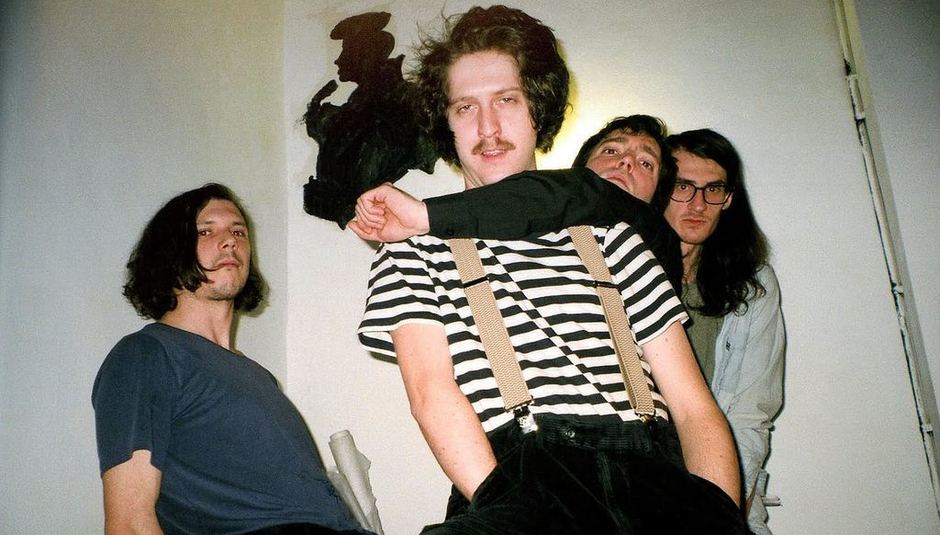 Hotly tipped South London four-piece Tangerines release their debut album this week (Friday 12th May). Titled Into The Flophouse, the record comes out on RIP Records and was mixed by MJ of Hookworms.

Here, the four Tangerines - Gareth Hoskins (vocals/guitars), Miles Prestia (guitars), Ricky Clark (bass) and Isaac Robson (drums) - talk DiS through each of the ten tracks that make up their debut.

Miles Prestia: This song started up with a jam, with Gareth and me working out this intertwined guitar riff that has something of Warren Zevon and something of Dr Feelgood. As we kept going back to it again and again, I suddenly heard the chorus somewhere in Gareth's vocal improvisations. At that time I was obsessed with the Peckham Boys. I was born and raised in Palermo, Sicily. As controversial as it may sound, there was always a sort of mythology around the Mafia and gang life in general. In contrast to many parts of London, where I feel like I am in an absolute nowhere, I always felt very much at home in the South. There is something really alive about it and a connection with a sense of history, which is disappearing throughout the gentrification process. That is why we did this video of the Peckham Boys as four white estate agents in Little Lagos. In a way, the gang-life is a form of rebellion against power, and while we do not celebrate violence and crime, the whole point that we want to make is that sometimes you wonder who the real gangster is. I think Gareth turned the whole subject into my favorite Tangerines lyrics so far. I like to think that I basically accompany his voice with my own guitar-storytelling throughout the song, trying to empower his lines. To me it's a tale about apathy, disillusionment and abuse, where the guitars scream of rebellion. Musically you can really hear the dynamics of our quartet.

Isaac Robson: One of our earliest, it’s a straight-up celebration of women and workplace romance. As such, it has a simpler feel than much of the album, but it’s still got rhythm and sweat. The original demo for this song is more laid back and a bit spaced out; I guess Gareth was really in a whirl at the time. For the album, it’s a lot more punchy and driven, with the pulsing bass and boogie piano. I definitely have thoughts of strutting, curvy hips. “I love the way you walk your body.” There’s a lot of sizzle in the cymbals, shakers and some of Miles’ lead parts, and it feels like that first hot day of the year when there’s a lot of skin on show.

Rick Clark: This track had a massive impact on the band in the early stages. It was the first song where we officially started writing together properly. The process was painful – don’t get me wrong – a real pain in the ass to work through, a make or break slog that needed to happen. It doesn’t come up much in interviews, but it broke the ice. It broke my ass. Like four guys getting in a room together, having sex with each other, and never speaking about it again. Now we understand each other pretty well, whether it’s on stage or jammin' in a rehearsal space, so it’s easy to forget because everything clicks now, but it still feels odd to think back to that first time. The sax at the end is great. I dig it.

Gareth Hoskins: This one started off with that drumbeat, so straight and deadbeat and bang bang bang bang. Much like a headache, but it does the job. I don’t even think Isaac likes playing the drums like this, but I forced him to - I was getting good with nun chucks at the time you see. For me, this song is obviously such a simple one, and I don’t think we really delve into such easily structured things too often, but the lyrics for me are what shines the most; "I’m dressing down, I’m checking out, spent all my money on a loony gown." It’s a time and place, more so inside the head, and I was spending a lot of time in my bedroom or in my shed being very, very pessimistic about everyone and everything going on around me and in turn, the paper is where I directed most of this rambling of mine.

MP: To me, this song represents one of the peaks of a long process we have been through ever since we got together in a rehearsal space. When you start an artistic collaboration with people you never worked with before, the conversation is not necessarily fluid and easy, whatever the level of chemistry you might enjoy. You gradually start to blend in with each other's style, energy, and egos, and it really is a never-ending development. I just love the almost jazzy way Gareth's guitar and mine are constantly switching on and off, creating a sinuous circle, while Isaac and Ricky provide a perfectly solid keystone for us to spin round and round and round. It's a bit of a drunken twister, and we are kind of skating on ice. It also has this lazy pace and cheerful summery feel (I think you can tell it was written in summer), although in a way it is one of the darkest and most political songs we have. Lyrically, Gareth traces a long imaginary line between Louis the XIV's absolutist kingdom to the present day corporate regime in London.

GH: This one’s for all the fathers, primarily mine, who passed away tragically maybe a year before I wrote this. Glam Glam, like the Glam Hippy Punk woodworking man he always was. It’s not all sad, I mean, it’s an emotional one but there’s a lot more weight to it than just that in the lyrics. We don’t really play this one live, I guess because we don’t want people to down their drinks for the wrong reasons, but this one turned out to be a real gem on the recording of it. It’s one of the more innocent, pretty numbers within the album. I’ll always remember us doing the backing vocals on this one, and how Miles would be directing and conducting me and Ricky in getting into this whole Beach Boys stylised chorus vocal build up. It was fucking hilarious.

IR: Possibly the tune that started it all. It’s us at our most raucous. For me, I love the swing and the way everything rides along under the gritty, unhinged vocal. There’s a hint of surf, but it’s totally skewed. London isn’t California. There is an American feel about the track though. A rootin’ tootin’ Hunter S. chases down William Burroughs, death in a fireball, witnessed by an alcoholic love child of Dylan and Beefheart who tells the whole story to a dead rat that’s squashed in a hot dog bun.

GH: Make way for one of the longest solos from Miles. I mean the whole song’s a solo, let’s be honest. It’s probably the only song on the track that I was never sure on how it should be entirely sung, all gnarly and throaty and gravel and graveyard and bones and give me that whiskey; or just plain and warm and sensual. Well, I guess I bridged the two. I do love playing this one live though, it’s got that never ending, relentless, train coming in kind of thing going on, and the faster we play it the more we feel like true men. Yeah. Sensual Punk is going to kick right off.

GH: This song came about in those very early primitive years of Tangerines, probably before Tangerines was Tangerines. I guess it’s just a love song, surrounded in a 1945 post war, come-home-and-show-me-that-you-love-me kind of way. I always loved the opening riff in this one and in the earlier demos of this I used a whammy bar to make it all bouncy and weird. There’s always been something oriental to me about this song, not sure why. Maybe all those jangly daggered guitars that pop in and out, or that feel of a strange Japanese doo-wop ding a ling thing. Anyway, it turned out rather country in the end, and this is actually the only song that was not intentionally recorded with a slightly different set up to all the nine others on the album; maybe we had a microphone stuck inside an air conditioning unit or balanced it on a toilet seat or maybe we raised the mic on a six foot ladder. I really can’t remember.

RC: Real sleazeball of a song this one, “Romance, let me feel those pants”, a bit of dirt and a lot of raw energy like Bukowski scanning the room at the end of a night. There’s a stumbling adolescence to it too though, those uncontrollable urges after your first line of sherbet. It’s a crowd stomper, a hoot n holler, and probably my favourite track to play live. Always made sense to stick it last on the album as a kind of culmination of everything coming together one last time; a celebration of everybody’s involvement during the making of the album - and it has to be said, it was a real joy to record...mostly.