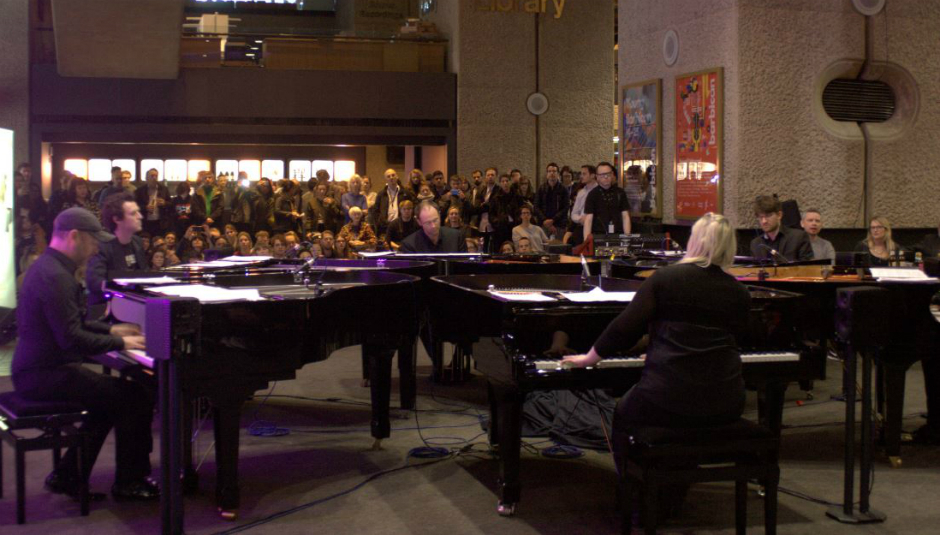 A Million Colours In The Mind: DiS Does Piano Day @ The Barbican

A Million Colours In The Mind: DiS Does Piano Day @ The Barbican

There’s something gentle and humbling about Piano Day, and an elegant simplicity that suits the nature of the instrument. “Why does the world need a Piano Day?” asks founder Nils Frahm in the event’s mission statement. “For many reasons. But mostly, because it doesn’t hurt to celebrate the piano and everything around it.” But such an unassuming ethos has birthed a truly global event, where on the 88th day of every year – the number of keys on a standard instrument – writers, composers, tuners, movers, performers, and listeners gather to celebrate the legacy of Bartolomeo Cristofori’s invention.

From Montreal to Melbourne, and Ankara to Tokyo, the list of events for the 2017 edition is as long as it is illustrious; 42 separate cities hosting over 70 performers and artists. DiS finds itself at London’s Barbican, for a day of special performances and world premieres. In keeping with the event’s inclusive and educational aims, the double performance by Piano Circus – they play two slightly different sets, one at 1pm, the other at 6pm – takes place in the foyer and is completely free; come one, come all. Six Feurich grand pianos are arranged in a circle, carefully tuned and amplified, a task I’m told is a technical marvel in itself (aside from dealing with the cavernous space complete with awkward columns, a specialist spends most of the fours hours between performances rotating between all six instruments, tinkering and adjusting.)

There’s a healthy percentage of kids and young families present for the lunchtime show, some hunkered down on the cushions that have been laid out on the floor closest to the instruments. The bustle of the daytime crowd is soon jolted by the frenetic energy of Graham Fitkin’s Totti, quite possibly the only piece of classical music written as a tribute to a modern day footballer. Irresistibly rhythmic with a crazed edge, it builds and builds to an unyielding cacophony and demands attention, showcasing just how impressive an ensemble Piano Circus are. Perhaps it was chosen specifically to combat the background chatter of daylight hours, or perhaps it provides a neat opportunity for the group to properly open up and stretch themselves; either way, it’s a shame it doesn’t reappear in the evening set.

In its place is Steve Reich’s Six Pianos, a hypnotic and highly technical piece that ebbs and flows, each pianist drifting in and out. It is, by any standard, a simply beautiful piece of music; moving and contemplative, the whole piece shifts slowly like a vast sea, each new phase revealing hidden motifs and textures. It also sits neatly alongside Nils Frahm’s Hammers, another dark, weighty piece that inexorably lulls you in. Originally written for two pianos, its power is expanded and extended, the cumulative effect adding drama and tension. Having the two pieces back-to-back works on several levels, not least for the gentle hypnosis and stretching of time; simply closing one’s eyes and getting lost inside the dynamics is richly rewarded.

Highlight of the day though is the world premiere of Angus MacRae’s Through Shadows, specially commissioned by the Barbican for Piano Day and written to utilize the possibilities afforded by six pianos. He’s in attendance too, beaming like a proud father, if a little shy when called upon to give a short speech. Different in style and mood, Through Shadows is a quiet, delicate piece, moments of silence demanding as much attention as the restrained melodies and soft peaks. Both performances have a purity and poise, the intricate interplay between the six truly mesmerising. Its subtlety is key; as fragile as a flower, the piece draws its power not from drama or crescendos but a gentle tension that threatens to break but never does.

The world of classical music can often be a staid, stuffy place, beholden to arcane rules and customs. Few events challenge this quite like Piano Day; fun, joy, and education are every bit as important as the somber majesty of some of the music. Leaving the Barbican, we end up at pop-up store-cum-gallery-cum-recording studio One Good Deed Today, where the basement has been turned into a mini performance space. People lounge around on giant cushions sipping wine while a variety of performers take turns on an upright piano and an organ; the mood is relaxed and playful, more like a slumber party than an official event, and even the running order is treated as merely a guide as opposed to something set in stone.

Piano Day’s great success is engaging people in a world that does not exist in the limelight and might otherwise slip quietly by. Open and welcoming, it’s a gateway; to some of the great yet underappreciated composers and pianists, and to the potential the instrument still has to surprise. Above all, it posits the idea that the piano’s best days are not in the past but still to come, that it deserves a place among the technological marvels and alternatives afforded by the 21st century. 88 keys, but infinite possibilities; truly something worth celebrating.