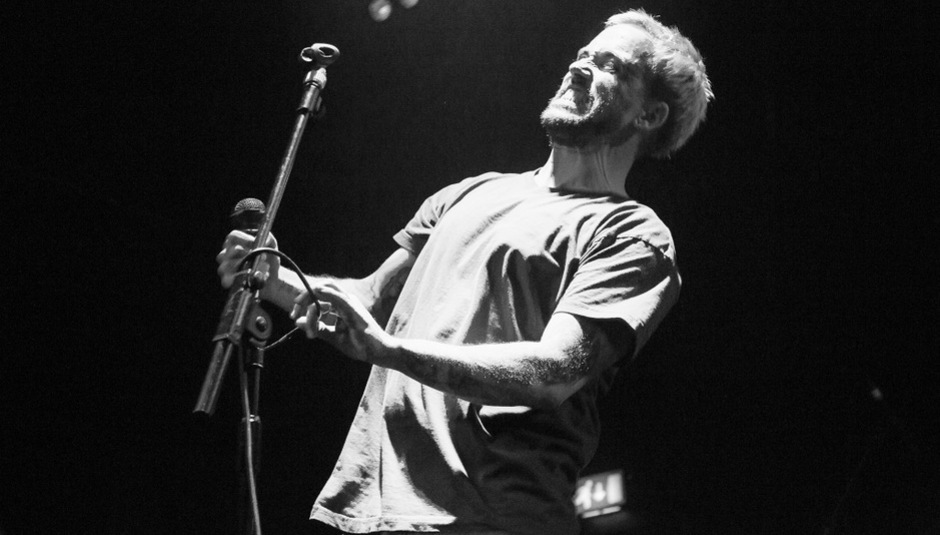 The May Day bank holiday weekend has signified the official start of festival season for a number of years now, and this year was no different, even if the weekend itself fell in April. With the firmly established Live At Leeds and Manchester's Sounds From The Other City taking place on opposite sides of the Pennines, and the inaugural FestEvol just around the way in Liverpool adding to an already saturated market, there was no shortage of choices for those looking for a musical escape.

However, another festival that's also gained a healthy reputation took place in the East Midlands over the weekend. Now in its fifth year, Handmade has grown considerably since the initial edition back in 2013 and this year's event was even bigger, with a third day being added that saw it open its doors on a Friday for the first time. Primarily the concept of Robot Needs Home's John Helps - perhaps better known to some as the guitarist in post-rock outfit Maybeshewill - Matt Kirk, and Nik Sharpe who run local venues Firebug and The Cookie respectively, it's based in the city of Leicester and spread for the most part across four rooms at the O2 Academy on Saturday and Sunday.

The introduction of another day gave it an inner city multi-venue feel and DiS was only too happy to host a stage at the festival for the first time. With five separate participating venues on the first day - The Cookie, Firebug, the LCB Depot, The Guildhall, and Bishop Street Methodist Church aka the home of Drowned In Sound for one day only - Handmade became a mini-Great Escape or Dot To Dot for the first time in its history.

Kicking off proceedings on our stage were Cold Water Souls, a band who've made significant progress over a very short space of time. While it's still only early days in the band's career, they're fast carving out a reputation thanks to their heartfelt and occasionally dramatic guitar anthems which sound even more prophetic in this holiest of settings.

Over in the LCB Depot, Ella Van De Woude who many of you will recognise as Amber Arcades' touring keyboard player is playing an acoustic set that's both poignant and uplifting in equal measures. Songs like 'IDWTGTKY' and the closing 'Lullaby' from her recent self-titled EP raise a smile or two, as does a buoyant cover of Backstreet Boys' 'Back Of My Hand' which opens the set. However, it's forthcoming single 'While You Are Away' that really highlights her potential as the latest and possibly most genuine incumbent to Hope Sandoval and Mazzy Star's seemingly untouchable throne for creating majestic, dream pop ballads. 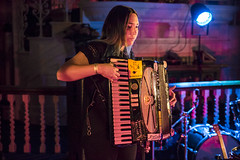 Returning to Bishop Street church, both Eyre Llew and Haiku Salut provide shining examples of why both bands are held in such high regard. While the former are debuting a brand new set this evening including one song that was only written in the twenty-four hours leading up to the festival, the latter are playing some of their best known and most loved songs for what will be the last time for the foreseeable future. So while next single 'Havoc' and the equally familiar tones of set closer 'Fire Breather' raise the roof for Eyre Llew, it's a resounding thanks and goodbye to long time favourites 'You Dance A Particular Algorithim' and 'Los Elefantes' for Haiku Salut.

Headlining in the church are Her Name Is Calla, playing in their home city for the umpteenth time but sounding no less intense or vital. With tonight's set being recorded for a live album, there's no room for errors and thankfully their intricate take on ambient folk and post-rock works immeasurably in such salubrious confines.

Our next stop is Firebug where overly hyped London outfit HMLTD put on a less than convincing show that is infinitely more about style than substance bar closer 'Where's Joanna?', which is probably the only part of the set that lives up the band's star billing.

Saturday's line up arguably constitutes the weakest of all three days, and although we arrive onsite a little too late to catch Baby Naga's swashbuckling psychedelia, London lo-fi garage punks Goat Girl provide the first memorable encounter of the day. Fusing slacker rock with a carefree attitude that's part Kim Deal, part Lias Saoudi, their performance is so insular they could be forgiven for thinking they're still in the rehearsal room playing to themselves. And yet, such mannerisms (not to mention songs like 'Scum' and 'Lay Down' that flick musical V signs to all and sundry) make them an endearing proposition worth thirty minutes or more of anybody's time. 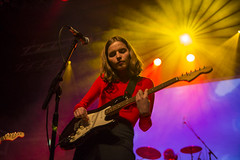 Similarly Peaness exude a presence that's refreshingly energising and while there's still a few shambolic edges maybe in need of refinement, their short but sweet set on the O2's tiny Cave stage is just what Saturday teatime slots at festivals should be about. Which is more than can be said for Shame, another capital based hype band whose only memorable feature is the novel pinstriped tracksuit top adorned by their singer.

Nottingham's Kagoule don't seem in the best of moods, which is perhaps understandable when halfway through their performance the sound bleed from Pulled Apart By Horses set in the room behind causes them to stop playing for several minutes at one point. Fortunately, it doesn't interfere with proceedings too much and once they get in their stride, the new material aired from the band's forthcoming second LP blends in well with more familiar numbers such as 'Made Of Concrete' and 'It Knows It'.

A lot has been said about Cabbage singer Lee Broadbent's alleged misdemeanour while supporting Kasabian in Brixton recently - much of it by people that weren't actually there - and while no one would ever condone any kind of assault be it physical, sexual or otherwise, if there is a case to answer one hopes it will be dealt with swiftly and the perpetrators taken to task. That said, it's clearly weighing on the band's minds if tonight's muted (by their usual standards) performance is anything to go by. While fellow vocalist/guitarist Joe Martin strips down to a basque, stockings and suspenders during 'Dinner Lady', any hijinks are confined strictly to the stage with audience interaction kept to a bare minimum throughout.

The next day, DiS arrives early which means we catch Brighton's Orchards whose delightful fusion of punk, metal, dance and pop is a joy to behold. While the vocal harmonies of Lucy Evers and Dan Fane carry their breathless energy through each and every number, there's something instantly likeable about them that radiates to and from the audience throughout. As do Happy Accidents, whose frantic nerdy punk pop reminds of Johnny Foreigner or Los Campesinos! at their most youthfully exuberant. 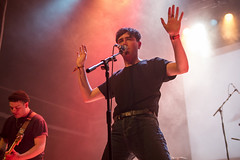 In case you've been living under an aquatic rock these past few weeks and were therefore oblivious to everything going on around you, there's a general election happening in a few weeks time yet an alarming lack of politically motivated bands around at the minute. So thank goodness for Idles, a band really not afraid to say what they feel and cause a riot in the process. Livewire singer Joe Talbot stalks the stage menacingly throughout, aided and abetted by his four accomplices on guitars, bass, and drums respectively. They play songs about depression ('1049 Gotho'), materialism ('Heel/Heal'), unemployment ('Well Done'), smalltown England ('Exeter') and the Conservative government ('Divide And Conquer'). Musically taut like an amalgam of Killing Joke and Future Of The Left while Talbot spits out lyrical asides berating all of the aforementioned, at one point he encourages those out front to "Either vote Labour or fuck off!" before joining them along with a couple of his bandmates during riotous closing number 'Rottweiler'. If there's a more relevant band right now I've yet to see them. On this showing, Idles are simply unmissable.

Also kicking against the system in a similar vein are Hull four-piece LIFE. Wearing politicised hearts on their sleeves as big and angry as the noise emitted from the stage, their blend of punk rock sentiment fused with metallic riffs provides a ferocious call to arms that follows on well from Idles' raging set earlier. Unfortunately, what that entails is anyone following either band has a difficult pair of acts to live up to, and while Meat Wave try their damnedest and in all honesty, play a set that's true to its word delivering polemic post-punk, they just fall short of the ridiculously high standards set in the hour or so beforehand.

Likewise Honeyblood, a band whose music resonates so much better on a live platform than it does on record. Watching the onstage dynamic between guitarist Stina Tweedale and drummer Cat Myers it's clear they're having the time of their lives whilst belting out numbers like 'Babes Never Die' and 'Super Rat', and the large crowd packed inside the Academy's main room respond in a similar, raucous fashion.

British Sea Power have become something of a national institution so it's little surprise that the same room is packed to the point of it being a case of one in, one out by the time they hit the stage. As with all British Sea Power shows, the stage is decorated with all kinds of foliage which only adds to the intimate setting the band aim to create irrespective of the venue's capacity. Playing a set that's largely comprised of songs from their most recent long player Let The Dancers Inherit The Party, it's the triple whammy of 'No Lucifer', 'Remember Me', and 'Waving Flags' in the final third that are most rapturously received by this most welcoming of audiences.

With the final curtain about to come down on Handmade for another year, it's left to Birmingham's Jaws to demonstrate how far they've progressed as a band between records over the past couple of years. While 2013's Milkshake EP bore all the hallmarks of potential greatness in the making, last year's Simplicity was the realisation of those wares and this evening's set mostly consisting of songs off that record provided significant evidence of how much they've blossomed into one of the most exciting bands on these shores that makes for a fitting end to the weekend's festivities. 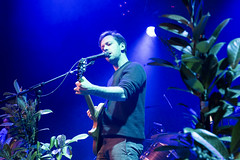