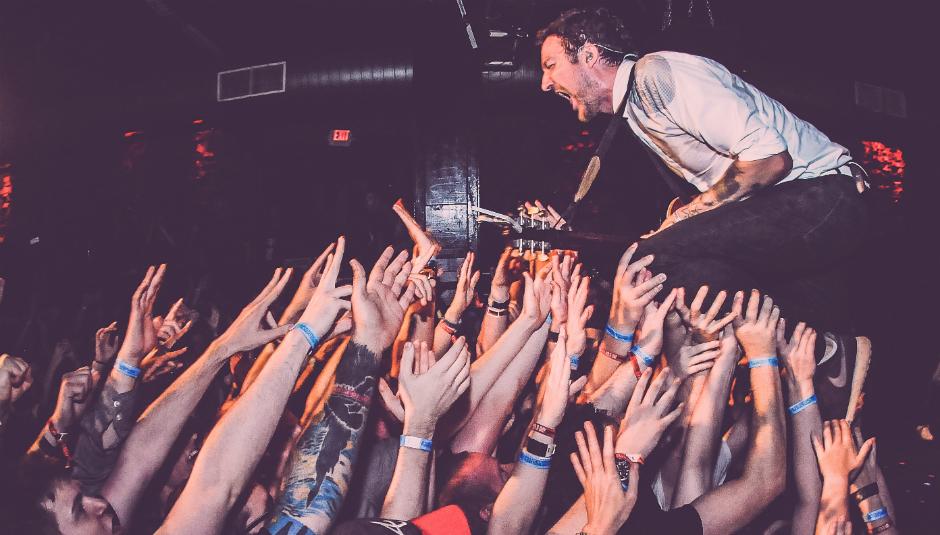 It’s a time of change for Frank Turner. This month, he will host his own four-day music festival at Camden Roundhouse which will see a lineup he’s put together himself. It will also see him drawing a line under the Positive Songs For Negative People album cycle and move onto the next phase of his career.

That phase could be markedly different from the previous stages of his career for a number of reasons. The release of the film Get Better, which sees Frank as the main character and charts some very dark times for him, saw an ending with Turner appearing much more settled. His cover of ‘This Year’ by Mountain Goats saw him experiment with electronic sounds in a way he never has before and ‘Sand In The Gears’, a protest song in the wake of Donald Trump’s victory, saw him look externally rather than internally for inspiration.

We catch up with Turner as he closes one stage of his journey and looks forward to the next.

Frank Turner: Good thanks. Busy as ever, looking forward to working on a new album after Lost Evenings has come and gone.

Was it weird watching a film with yourself serving as the main character?

Yes, very much so. It's not my piece of art, at the end of the day. Ben made the film about me, but I'm the subject rather than the painter. There are a fair few uncomfortable moments in there for me for sure.

The film seemed to portray you taking a bit more time for yourself. Is that something you’ve managed to stick to?

For the most part, yes, though, like everyone, I'm a work in progress.

Fans are getting pretty keen for that to be released on a wider scale. Any word on that?

Yep. I'm in the USA right now doing a promotional trip for the film. Once that's done we're looking at a DVD release and streaming services as well.

It portrayed you as happier than you’ve been in a while. How do you see this being reflected in any future releases?

Ha, well, by the end maybe. It perhaps gives me a different perspective to write from. That said, for the most part, I feel like I've spent quite enough time examining my personal life on recent records. Time to talk about something else.

Was ‘Sand In The Gears’ a one-off response to the situation or can we expect more single releases any time soon?

It was a very instinctive response to the situation, so we recorded it live (in DC, the night before the inauguration) and rushed the release. I'm working on a new record intensively now, but that won't be seeing the light of day until it's ready, which is likely to be early next year. ‘Sand In The Gears’ is lyrically indicative of where I'm heading right now though.

You’ve said that you’re in the middle of writing a political record. How’s that going so far and is there any point where you have to rein yourself in from taking points too far?

I don't think reining yourself in is a particularly good instinct in art, personally. It's an interesting experience. Perhaps "political" isn't quite the right word. I've been reacting to events in the wider world much more directly than I have in a long time, perhaps ever. But it's not exactly a Rage Against The Machine album. I'm interested in fear, dread, change, and uncertainty.

Is any part of you worried how it could be analysed after the grief you got back 2012?

The brilliant cover of 'This Year' felt different to anything you’ve done. Is that style of song an approach you’d like to take going forward?

Thank you. Uh, "perhaps" is the short answer. I'm certainly trying to push myself out of my musical comfort zone and look at other approaches, and I've been thinking more about beats and rhythm than I have in the past. We shall see.

That was done for the Campaign Against Living Miserably. How important are causes like that?

I think CALM do an incredibly important job, and it's a small thing for me to try and help out where I can. I try to do my share of charity stuff in my career, I think everyone does really, it's a good thing to use whatever platform I have in life to try and talk about something other than myself, from time to time.

And how is it knowing fans say your songs help with mental health issues. Is it a source of pride?

I wouldn't say "pride" necessarily. In fact, prima facie, it's something that can make me a little uncomfortable. I am very far from settled in my own mind, and I don't quite know how to react when people tell me that they relate, or are helped, or whatever, by my ramblings on the subject. That said, over time I have found ways to make peace with it, and it is, of course, a compliment, so I'll take it.

You say you’ve switched up the way songs are played the more they’re toured. Which one would you say has changed the most?

Most consciously, I'd say "Long Live The Queen", which now has a more 'rock' arrangement than it did on the record. But then some other songs, like maybe "Photosynthesis", have just evolved slowly over time, to the point where the recorded versions are quite weird to listen to for me now.

What’s the experience putting together Lost Evenings been like?

It's been a lot of work, but ultimately it's been great (so far, at any rate). It's wonderful to feel it all coming together right now.

I always get asked to ask you about Mongol Horde. Is there anything you can give us about that?

Mongol Horde is a load of fun, and definitely something that the three of us want to do again at some point. That said, it's something that exists in the gaps in my schedule, of which there are precious few right now. I know Ben and Matt have been working on some riffs lately, so the process for a second album is sort of beginning, but it'll be a long time (I suspect) before that comes to fruition.

This year sees you headline Kendal Calling again. Is there anything in particular that draws you back there?

It's a wonderful festival, run by good people, for the right reasons. The vibe is excellent, and the line-up matches that. It's an honour to be asked to come back!

And how do you feel about the upcoming General Election?

Frank Turner plays four nights at Camden Roundhouse with his Lost Evenings festival from May 12-15.