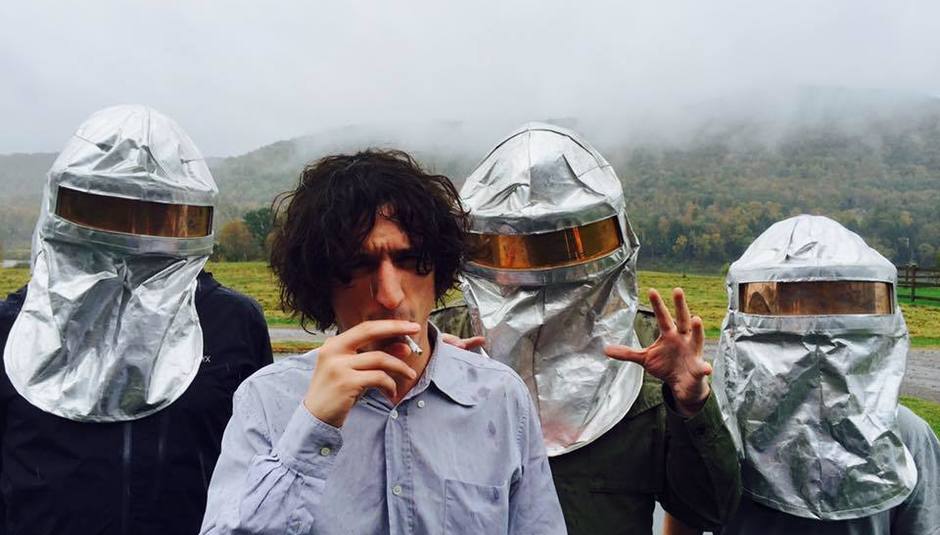 The Moonlandingz Track By Track Guide to Interplanetary Class Classics

The Moonlandingz Track By Track Guide to Interplanetary Class Classics

'Vessels' is the opening track on the album. We were going for that Glitter Band beat thing on this track, which just through association to the great glam nonce, Gary Glitter, always gets people's "uncomfortable bone" twitching, which is a shame as the Glitter Band, despite the old wig wearing fiddler, were an amazing band. We recorded two drummers on this track; the amazing drummer & producer Ross Orton, and Sean Lennon playing an old marching band drum. It's also got that Giorgio Moroder/Chicory Tip vibe to it too. The Black Lips were hanging up at Sean's studio over our first few days recording in upstate New York, so I got their sax player, Zumi Rosow, to blast some sax down on it too, which sounds great... I really wanted the album opener to sound quite futuristic whilst simultaneously sounding like the 70's again. The reason being? We are politically, culturally, and economically right back to those dark, dark days of where people are intolerant to their neighbours, other people's cultures and race.. the future really does seem a little backwards.

This is the first track Dean Honer, my musical partner in the Eccentronic Research Council and I collaborated on with Lias (Saoudi) and Saul (Adamczewski), up in Sheffield. I started recording the psychedelic intro with the harpsichord and then added those multiple weird swirling reversed synth parts that play throughout the track, through a tape echo at home, followed by adding a jazzy swing beat to the start and a synth bass on my Korg MS10. I then took the parts round to Dean's and we added a straight motorik beat and Farfisa organ and Dean added that great jubilant synth line on the chorus. Lias and Saul then came up to Sheffield...Saul put down a slinky fuzz guitar riff which we fed through a modular synth, then Lias wrote those killer opening lines "Matter matter matter everywhere, only one thing matter matter, matters to me, is the matter that matters on the mattress!", which is a killer opening verse. We then got the words into a vocal melody and I came up with the "I (don't) feel alright" chorus. I didn't want it to appear too positive (laughs)..It pretty much became the benchmark that all other songs we wrote were judged. Every track had to be able to stand up next to it. I think it's a modern day classic. Tomorrow's standards today. We did a version of this as a duet with Phil Oakey and Lias, but as good as it was we still felt the original recording was the definitive version, so we stuck with that. Maybe the duet version might see the light of day in the future?

Our radio A-Listed smash (laughs) started as a kind of sparse Neu! meets ESG type of drum machine and bass kind of track, which sounded pretty cool, but as with most Moonlandingz tracks, we always end up whacking in everything, including the kitchen sink. I guess we've got pretty fertile imaginations and like to push a track as far as we can. I ended up putting a rough version of the organ riffs down in Sheffield (which I re-did in New York on John Lennon's own beautiful Farfisa) and then added some mellotron choirs and Dean layered down a bunch of crazy synths. Lias and I then went to the pub then when the fuel of the Deception ale hit its peak, we went back to mine and he pretty much free form sang the first verse and what became the chorus straight off the top of his head. Saul kicked out the guitar parts in two takes. Lias and I then wrote the Vincent Price 'Thriller-esque' spoken-word bit in the middle, which is peppered with part lines of curses from some U.S 60's satanic witch cult. When we play this track live people have been really losing their shit to it, from the word "THRICE" onwards, there's like some mad ground swell thing that happens and next thing you know, the whole audience lifts off about three feet off the ground, like some mass levitation shit!

This was originally a Fat Whites rockabilly-esque demo, that we ended up adopting and re-shaping and re-arranging into a dark Laibach at the disco kind of track. It was written by Lias and Saul and Lias's brother Nathan. Dean and I took the original guitars and vocal from the fat whites demo and removed the drums. We then added drum machines, I replayed in a slightly different phrasing of the original organ part, added an arpeggiating bass synth and sang the chorus vocal using an old vocoder. We then chopped it up into more of pop arrangement then beefed it up with live drum fills with Ross and Sean added some percussion stuff with a reversed drum machine snare and a Gong! Other than that, Yes, Ian Duncan Smith is a Twat of the first order!!

This is our current single and it features the delicious voice of Rebecca Lucy Taylor, whose voice I've been a fan of for years. Some of her harmonies sound like fucking Abba, which is very classy. She definitely has that same pure emotional tone that the ladies from Abba brought to their big break-up records. The lyric was written from the viewpoint of the girlfriend of some "wannabe weekend Lou Reed" so we thought it was only correct to lend it a slightly modernist Velvets feel with a bit of that Phil Spector vibe thrown in for good measure. I think as Dean and I come from the background of soundtracks & weird spoken word records and radio plays, we have the ability of taking a lyric and putting it in its natural environment... Or its unnatural environment.

Valhalla Dale is a fictional town, in South Yorkshire on the edge of Sheffield where The Moonlandingz were born. I thought it was important to give a little nod to the fictional side of the group's history. So Dean and I wrote this spooky little instrumental number, which Sean added this beautiful old, gas powered, fairground organ ( Calliope) to. I wanted a track that would bridge the big psychedelic rockers of the A-Side into the weird wild wonky pop of the B-Side. It's definitely a record of two sides. An A side and a B-Side (laughs)!

The Rabies Are Back

Lias and I came up with the chorus for this whilst getting pissed in a subterranean bar in Sheffield, whilst a mate of ours, Tom, was DJing some smooth hip hop. Lias & I just started singing this funky little chorus over the top of some break, "Ladies, the rabies are back!" Whilst laughing our heads off in the corner of the room at the absurdity of such a line. It's funny how "the gold" materialises sometimes. We then went for a curry and walked back to my flat, where I pretty much freestyled the opening verse. Next day we couldn't get that chorus out of our head, so went straight round to Dean's studio, where Dean got a groove going and this semi-funky, Devo thing on the go. Lias and I got a bit more stuck into the lyrics and it ended up being a song based on my memories of being a child in the seventies and being bombarded by these TVs adverts telling you not to go to France or mainland Europe as if you get bitten by a dog, you'll get rabies and die. It's kind of a euphemism for the scaremongering we currently find ourselves living in, but it sounds like the most fun, alternative party record since, I don't know, 'Love Shack' by the B52's. We should be awarded an Ivor Novello for this song alone (laughs)!

Whilst recording in upstate New York, Neuf Du Pape would be our drink of choice. It's a really good quality wine that would usually come out later in the evening when stuff would start getting weird. This track is about the political war on the working classes and underclasses of Europe and was originally written in reaction to some very stupid comments that the bloke from the Eagles of Death Metal made, post the tragic Bataclan shootings.

Lias met Randy for the first time in the KGB bar in the East Village a few years ago when the Fat Whites were playing over in the US. I'd not only of felt like we had let our fans down if we didn't pursue him to guest on this particular heartwarming narrative of sexual awakening and self-discovery, but I'd have felt we'd let ourselves down too. So when Randy was visiting London on a work trip, Lias and I kidnapped him for a couple of hours and got him in the studio. He was such a good laugh, but nailed the part of "Gunter the Giver" like a pro. Did you know he was also in a band with Grace Jones? He's an interesting cat is Young Randy, pure Studio 54!

It's about how depression can drive some people to do horrific things, things that are almost unfathomable to human understanding. But they are not archetypal bad people. They are often just very regular, but very ill people. Musically the track was quite krautrock when we started, but I just thought it was missing a little emotional space for reflection, which is why I wrote that extended harpsichord section at the end, which Mr Lennon scored some mellotron strings around.

We had this big psychedelic funky jam thing that was about fifteen minutes long. It sounded a bit like some of Yoko's solo records from the early 70's like 'Approximately Infinite Universe', which I loved. I had a brief chat with Sean about maybe getting Lias and Yoko having a scream off on the track, which he liked the idea of. It wasn't mentioned again. Then a few months later, on a cold winter's night in Sheffield, Sean sent me a short video clip of his mum, doing her thing over our track. I don't think I've ever felt so proud. It was a great great honour. She's an avant garde warrior, a true and tireless activist, a great artist and the Queen of the Scream! Once we got the vocal parts sent to us in Sheffield, Dean, Lias and I got together to write some words that we hoped would kind of compliment Yoko's whole ethic. You know, the things she stands for and has fought against all her life - discrimination, sexism, racism, the corporations, the basic mistreatment and abuse of the common man and woman. Yoko Ono has proved that she is no one's victim. She stands up, she reacts, she acts, she's more relevant now than she ever has been. The world's catching up with her vision. I think we have captured that sentiment with the track. It sounds like the world outside right now. The chorus also has Phil Oakey from the Human League singing on it, along with Rebecca Taylor, Lias and I. Five generations of art school legends!