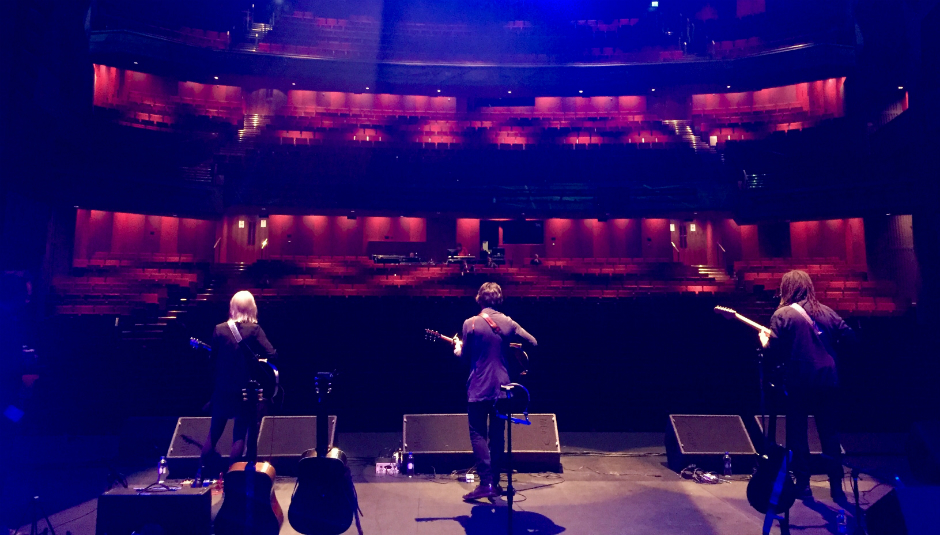 On Unity And Not Giving In: Conor Oberst @ La Maroquinerie, Paris

On Unity And Not Giving In: Conor Oberst @ La Maroquinerie, Paris

There’s a lyric in ‘Milk Thistle’ from Conor Oberst’s 2008 self-titled LP that likens reading the newspaper in the morning to being stabbed in the eyes. It popped into my head at some point last year and it’s been hanging around there ever since. A look at the day’s headlines or a glance at Facebook has become something I’ve started to avoid; bad news piles on top of more bad news, fear, incredulity, sadness and recrimination are inescapable. Any sense of the moral high ground gets lost amid sweeping statements that belittle others’ beliefs or fail to comprehend the reasons behind the mess the world has found itself in: the impotence felt by millions that has led to Brexit, Trump and the rise of nationalism and inward-looking, solipsistic politics in so many nations… All reflected in scattered status updates and a screaming barrage of articles that say the same thing. Hopelessness, anger, impotence, anger. Shit, I had a dream that I met Donald Trump not long ago. In it I berated him, but not in a way I’m particularly proud of. I raged and shouted and called him old.

It’s easy to succumb to despondency, to name-calling. Last summer I travelled around the USA, and from the car-rental assistant in Las Vegas to the hot-dog vendor in Flagstaff, Arizona, and from the barflies in Memphis dives to the hostel manager in Washington DC, people were quick to discuss the situation unprompted, and even quicker to condemn the then-candidate. “A nightmare” is how many described it to me, and it’s a nightmare we can’t wake up from, nor really understand in its entirety just yet. So when Oberst takes a few minutes during tonight’s show to address the “elephant in the room,” it’s not unexpected, though it is jarring at first (“So, we’re American…” is his opening gambit).

I listen to music – and read books, and watch things – to try to make sense of the world, and increasingly to escape from it, too. But as much as it jolts me back to unwelcome reality, Oberst’s speech is warm and optimistic. He notes the rise of fundamentalism – and of xenophobia, sexism, racism and Islamophobia, and the subscribers to these ways of thinking, a concern felt in Paris as much as anywhere else in the world at the moment – but also proposes that there are more good people on this planet than there are bad ones. His message is one of sticking together and “riding out the storm” while maintaining a sense of dignity, and like most things he says this evening, it’s delivered in a humble, self-deprecating manner; he follows these words by apologising for sneaking a “political commercial” into the concert before launching into an abrasive, hell-for-leather rendition of ‘A Little Uncanny’, a righteous, swampy strum from last year’s Ruminations (and indeed the forthcoming Salutations), of the kind that he has lost none of his talent for.

On this brief jaunt around Europe he’s been playing intimate, mostly seated shows, accompanied by his housemate Miwi La Lupa’s unobtrusive bass notes and lead guitar and supported by Phoebe Bridgers, who later returns to the stage for a cover of Oberst’s favourite (and oftentimes back-up) band the Felice Brothers’ ‘Jack at the Asylum’ and a gorgeous, delicate take on ‘Lua’. La Maroquinerie isn't a seated venue; it’s more of a cool rock club with a restaurant upstairs selling cheese platters and craft beer, but the sound is perfect and the atmosphere is relaxed and jovial. There are no cries of “I love you Conor!” or requests for Bright Eyes tunes. Oberst and La Lupa play ten songs, take a break and return with six more before calling it a night.

The set is heavy on Ruminations, and indeed opens with its first three songs, slightly out of order so as to enable him to remain at the piano following a tentative ‘Tachycardia’ for the haunting character study ‘Gossamer Thin’. ‘Barbary Coast (Later)’ is a flurry of heavy-hit chords, and, easing into older material, ‘Ten Women’, ‘Ladder Song’ and especially ‘White Shoes’ are striking. ‘Mamah Borthwick (A Sketch)’ is even more-so, silencing even the talkiest of talkers near the door to the downstairs bar. Oberst swaps out the adjective ‘hesitant’ for the more upbeat ‘confident’ in the final verse of the latter - a small but telling detail, and one in keeping with the unlikely positivity of the evening.

Other highlights include a moving tribute to his elder brother Matt in the form of the Replacements’ ‘Here Comes A Regular’ and an evocative ‘Cape Canaveral’, wherein Oberst’s increasingly percussive style of playing the guitar is on vibrant display. The singer thanks his French promoter for bringing him back to Paris, chats about going bowling in Berlin, seeing the Mona Lisa “for like, a second,” scoring some weed (in a manner that suggests that this is no longer a particularly regular occurrence) and winding up eating in hotel rooms despite everyone’s best efforts to get out and see some of the cities they’ve visited. The whole evening, to reiterate, feels unhurried and laid-back, but energy levels spike during the closing ‘At The Bottom Of Everything’, in which earlier sentiments inevitably return. It’s a bit of a shame, then, that Oberst and La Lupa don’t return to the stage; the urgent, irrepressible opener of I’m Wide Awake, It’s Morning feels more vital than ever 12 years down the line, and the crowd respond by singing along then cheering for an encore for what feels like a solid ten minutes before the house lights go first halfway, then completely up.

It’s a fitting finale, though, and one that speaks to what Oberst drives at in his speech. Left abuzz, the audience head upstairs for cigarettes and more beer not so much stung by the lack of more songs as much as hoping to prolong that feeling of unity that only live music can really produce. We are in a nightmare, injustice is rife, and authoritarianism beckons… But there are signs to suggest that not all hope is lost, that it isn’t yet time to despair. Judges are opposing orders, people are taking to the streets and a generation is waking up to politics in a way that hasn’t always been the case in recent years. The world isn’t taking this lying down. Music – and art and literature – will help us to escape from the grinding churn of negativity and short-sighted decisions that are falling down upon us, and it will help us to confront them, too.