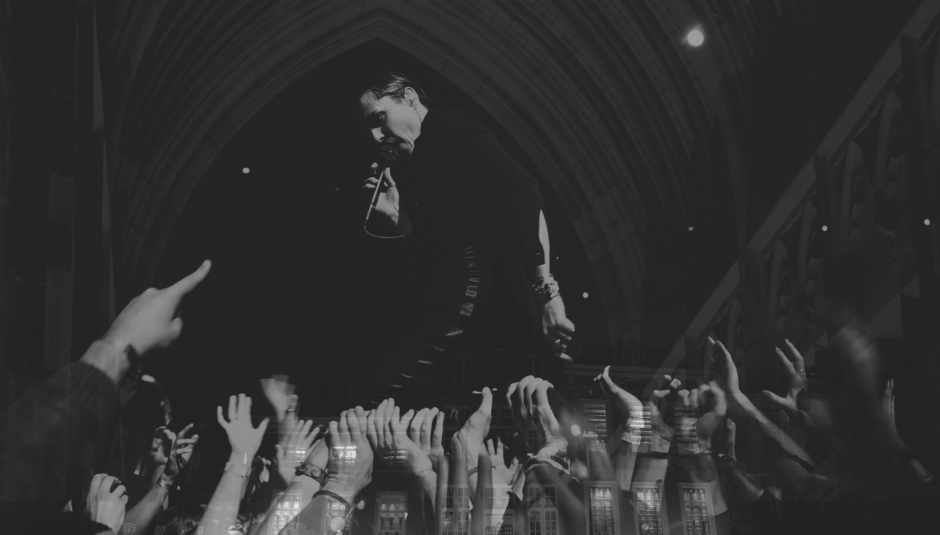 It’s Thursday night. Two days have passed since the world inexplicably tilted on its axis, and there’s still a few hours to go before we wake to the passing of yet another musical legend. Next to this, and all the turbulence 2016 has wrought, it seems a little profane to be upbeat about a mere festival. But then Utrecht, twinkling gently in the soft winter rain, seems far removed from unease and disbelief; people bustle around the central station and bars fill with relaxed revelers. And maybe it’s serendipity, or simply the cosmos taking pity on us, but Wilco are the main attraction tonight, delivering a two-hour set and soothing our collective souls with their gentle, shuffling country-fied Americana. “Wasn’t that a blow for harmony and niceness?” Jeff Tweedy says after a particularly beautiful rendition of ‘The Lonely 1’, as close to an acknowledgement of the week’s events as he gets. There’s no ‘Old Man Trump’ – perhaps he still hasn’t learned to play it – and no firebrand call to arms, but in their own way, Wilco are the perfect antidote to the dismay felt by many as the year draws to a close.

Le Guess Who? 2016 from Letizia Giannelli on Vimeo.

As events resonate from across the Atlantic and the English Channel – and concern among the locals about their own national election in March 2017 grows – there’s a determined joie de vivre in the air, and a sense that people’s spirits will not, should not, be dampened. Music as a means of escape has perhaps never seemed so vital, and as people scurry between floors at TivoliVredenburg and out towards the other venues there’s a sense of how important it is that art, in all its forms, can be a refuge and a unifying force. Not too many artists, or indeed the festival itself, bother with the question of whether music can be a response, the focus instead being on broadening horizons and celebrating inclusivity and diversity. Le Guess Who? has always leaned towards the eclectic end of the spectrum, and its continued success – this year sees it celebrate its 10th anniversary – proves that shying away from the tried and tested need not mean dwindling interest, a lesson some of the better known events on the UK festival circuit would do well to heed.

That’s not to say that a certain amount of anger wasn’t channeled on stage; anyone seeking some form of catharsis is spoilt for choice, with plenty of acts bringing the noise and barely contained aggression. The one two punch of Girl Band and Preoccupations in De Helling is a bruising experience, sets to be enjoyed physically as much as emotionally. Having been thoroughly warmed up by It It Anita and Die Nerven, the former moving their instruments to the middle of the floor for the last few songs, by midnight the crowd are fizzing with energy. The Dublin four-piece are barely a song and a half in before a mosh pit forms, started by two gents who look the wrong side of 50, limbs flailing and heads bobbing manically.

It is, in some ways, a natural reaction to what’s happening on stage, for Girl Band don’t so much as play their instruments as wrestle with them; the cumulative effect is very much like a stun gun to the back of the head, pure adrenaline in sonic form. A girl to the left of me moshes so hard that her hair becomes a weapon, threatening to take out an eye, while the photographers beat a hasty retreat from their hard won spots at the front, a few snatched shots of the chaos their only reward. Preoccupations are less visceral, but only by virtue of their habit of standing stock still; while Dara Kiely throws himself about as vigorously as those at the front, Matt Flegel & co build walls of noise that are slowly engulfed in dry ice and white light.

In the form of Swans, the festival also has one of the few bands who conflate loudness and repetition with a sort of spiritual yearning, and as a result have fans possessed of an almost quasi-religious fervor (in this regard, see also Sunn O)))). This particular iteration of the band sounds leaner and tougher, as if built for durability rather than grandiose statements, and there’s even a brevity about some of the material that suggests a concentrated focus. It is still, of course, mind-crushingly loud, but in a soothing way; waves of noise promote a hypnotic calmness, and several people around me shut their eyes and start to sway rhythmically, lost in the madness of it all.

There’s a different kind of fervor altogether on Friday, for Savages night. The curatorial aspect of this year’s festival – the four headliners each picking 10 to 12 acts – has led to, unsurprisingly, a few common threads running through each evening, but that’s not to say the intrepid go unrewarded. For example one could, if one chose, forgo the punk bombast and flailing brilliance of Bo Ningen and the ice-cold stylish pop of Jessy Lanza for far more sedate pursuits, piano maestro Peter Broderick and the wistful folk-pop of King Creosote being on offer at roughly the same time. The latter has the good fortune to be appearing in Janskerk, a stark yet atmospheric church dating from the early 16th Century, and the perfect setting for the likes of Kenny Anderson and an acoustic set from Slowdive’s Neil Halstead.

But it’s the curated line up that draws the most interest, and a run of Good Sad Happy Bad - Bo Ningen – Beak> – Jessy Lanza – Savages – Wrangler keeps people flipping between the Ronda and Pandora for most of the evening. None of the acts are less than stellar – Geoff Barrow & co have a wonderfully loose, fuzzy quality and a nice line in self-deprecation, while Wrangler’s electronic adventures are groove heavy beasts that build and grow and rumble along – but it’s Savages who once again shine brightest in this, what has become a defining year for the four-piece.

Unusually for a band this young, they’ve now toured the world several times over, and it shows; blessed with poise and grace, they way they rip through songs with nary a glance between them is magnificent to behold, as grooves are locked into and guitar lines strike like lightning. They have a presence that’s impossible to fake, and a charisma that burns; resistance here is futile. And as Ringmaster of this particularly potent storm, Jehnny Beth steals the show; with an intelligence as sharp as her stilettos and an authority that cracks like Faye Milton’s snare, she patrols the stage, stagedives, walks out over the raised hands, and cajoles those at the front. “Don’t let the fuckers get you down”, a refrain from their debut album but one that’s gained an added urgency in 2016, remains a timely reminder that we still have, at least for now, a choice aside from mere acquiescence.

Of course, there’s always more to Le Guess Who? than acclaimed and buzz-heavy indie. Each passing year seems to tip the balance further in the direction of the eccentric and esoteric, and the festival is all the better for it; where else could you see Brazilian samba legend Elza Soares followed by esteemed hip hop group Digable Planets? The intersection between what some might term World Music and others might argue as being overly niche is a narrow gap, but one that Le Guess Who? works very hard to fill; hence you have a near two-hour set from Phurpa, a ritualistic gathering featuring tantric throat singing and huge horns, zither master Laaraji, and Dutch underground maestros The Ex playing with the Ethiopian collective Fendika.

As diverse as all that sounds, it is merely the tip of the iceberg. But this is one of the founders’ goals – equality, and a focus on quality. As Bob van Heur told DiS last year: “We try to present more obscure genres in the same way as you would present more popular artists; at our festival, no one is a headliner as we are not the ones to judge which artists are more popular.” It’s a noble goal, and one that should be applauded. As an escape, and a celebration of music, Le Guess Who? is leading the way; as an antidote to parochial politics and those who wish to build walls and divisions, it’s nigh on essential. “I think it is and should be a place where artists can be inspired by other artists performing at the same festival,” added van Heur, “and there is just so much good music around that people really need to experience.” If you haven’t yet been, I’d suggest making 2017 the year that that changes.