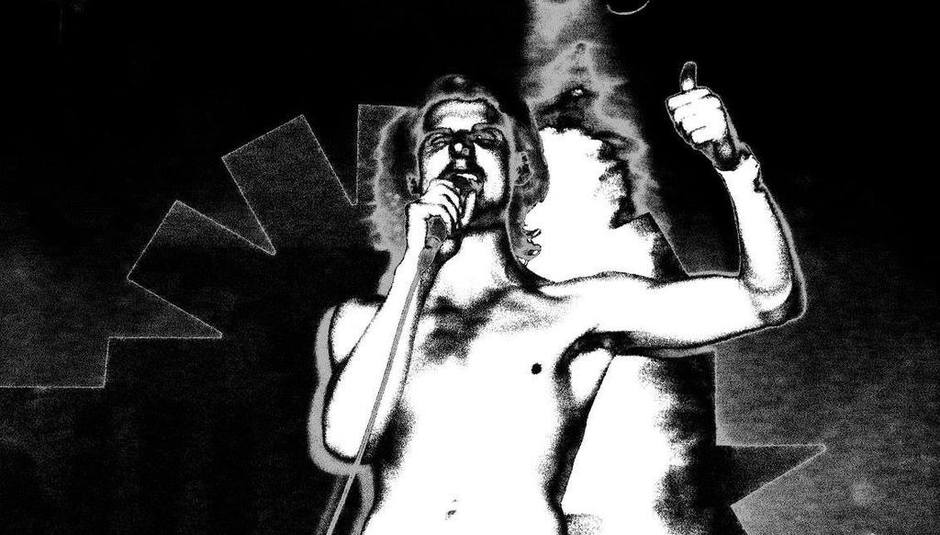 Hailing from the Mancunian suburb of Mossley, Cabbage might just be the most exciting live band in the UK right now. Their raucous shows have drawn comparisons with the likes of Black Lips, The Cramps, and Fat White Family while songs like 'Free Steven Avery (Wrong America)' and 'Necroflat In The Palace' question the US political system while wishing death on Donald Trump, and celebrate the NHS while accusing the royal family of necrophilia. Coldplay this most definitely isn't.

Having been together just over a year, the five-piece - Lee Broadbent (vocals), Joe Martin (guitar/vocals), Eoghan Clifford (guitar), Steve Evans (bass) and Asa Morley (drums) - have already played in excess of one hundred shows this year. Their new EP, Terrorist Synthesizer, comes out later this month, and while tonight's frenetic affair at Stoke_on-Trent's Sugarmill will mark the end of their latest nationwide tour, they're back on the road throughout the whole of February next year.

In three hours time, they'll tear the Sugarmill a new backside. Beforehand, DiS sat down with the five-piece to discuss all things Cabbage related...


DiS: So are Cabbage the most famous people to come out of Mossley since the-then then Northern Premier League football club beat Crewe in an FA Cup game thirty-six years ago?

Lee Broadbent: Did you ever watch 'Today With Des And Mel'? Melanie Sykes comes from Mossley as well. Mossley got to the FA Trophy final that year as well. They got beaten at Wembley by Dagenham; my grandad's on the video.

You seem to have been on tour for the majority of 2016. How's it been playing to so many different audiences this year?

LB: It's been great. We started this tour in September. In fact, we played here on the second date of the tour. Some girl came up to us before a show the other night and said she can't wait to have some sweaty guy sticking his balls in her face.

I saw your show in Derby earlier this month and it was one of the most exciting gigs I've been to in months.

LB: Cheers. Was a weird show that. The audience was full of 6Music fans.

Joe Martin: We were supporting a local band but everyone cleared off after we played. I felt bad about that as the headline band were great.

LB* I think the idea was to keep everyone in the venue until the end. We played a gig in Scunthorpe where we were billed as headliners, but by the time we came on stage - around midnight - everyone had left, so it can work against you if the night overruns.

You remind me of people like Black Lips, The Cramps, and the Fat White Family. Are they among your influences?

LB: I suppose they're all quite subversive in what they do, and we're quite subversive with our output. A lot of our live performances are dependent on the audiences we're playing to. If they're getting into it that inspires us. It's quite natural really.

Do you see Cabbage as more of a live band than a studio band?

LB: We've honed our craft on the road.

JM: We do take recording seriously but the songs tend to come together the more we play them on tour. It takes time to get things right in the studio.

Eoghan Clifford: It's made us tighter as a band being on tour, so hopefully that will make us better recording artists as well.

Will there be any new recordings coming out anytime soon? An album maybe?

LB: We've only been together a year and are already releasing our fourth EP. We've written about twenty songs that we're happy with which is pretty good going for our first year. We're going back to the studio again soon. We just need a bit of time off to write some new music.

This is the final night of the tour. Have you got any more shows lined up this year?

LB: We play in London on Thursday night and there are a few shows lined up in December. We're supporting The Coral in Coventry next month.

What's been your favourite show of the tour?

LB: Liverpool. Glasgow and Manchester were great as well. We were quite surprised by the reaction of the Liverpool crowd.

Then you're back on the road again next February. Will there be any new songs in the set?

LB: I hope so. We want to take the live show up a step.

JM: We have got some new songs, so hopefully they'll be in the set by then. We can't keep playing the same set over and over again, otherwise it just becomes tiresome.

Your reputation as one of the best live bands on the circuit has spread almost exclusively by word of mouth over the past few months.

LB: That's what's been great about it. The buzz has been created by fans, which is a side of it many bands don't get to see.

JM: Paul Lester from The Guardian got told to check us out by a photographer on a bus!

Bearing that in mind, do you think radio and the media is as important for breaking bands nowadays as it used to be?

JM: 6Music is definitely. We've been played on there quite a few times and we're very grateful for that.

LB: Independent music magazines and online blogs still carry some weight. The NME has lost its way a little in recent years, but people have still found out about us elsewhere.

The lyrical content of your songs is quite topical and at times controversial. Did you set out to write about certain subject matters and have the significant events of 2016 such as Brexit and Donald Trump's presidential election campaign also had an impact on your songwriting?

JM: I suppose it's a good time to be writing material with everything that's going on in the world.

LB: The 'Free Steven Avery (Wrong America)' song started out as a joke. It was just meant to be tongue in cheek but then people started calling it our big political statement. And then Trump got into power, so I guess it has taken on a whole new meaning. A year ago he was a completely different figure. Just some American reality TV star, a mainstream figure that everyone knew.

JM: We never thought for a minute he'd get into power.

LB: And I guess there aren't many bands that write songs about necrophilia.

You were initially associated with the Manchester psych scene and played Cosmosis in March. Do you have much in common with any of those bands?

JM: We got that gig through Greg who runs Cosmosis. He saw us at our second ever gig at the Night & Day Cafe in Manchester and booked us on the strength of that.

LB: Apparently someone walked in during our set at Cosmosis and started complaining loudly that we're not psych! It's one of those militant genres where people that are into it only listen to psych.

LB: Their set was amazing. I was crowdsurfing.

JM: It's proper poetry what they write.

LB: They included us in a Spotify playlist recently.

You're managed by Conrad Murray and Dave Salmon from SJM who also look after The Stone Roses and The Courteeners among others. Has their influence played a big part in getting the band noticed this year?

LB: Definitely. Conrad has that "man in the street" vibe about him where people listen to what he says.

JM: He works very hard for all his bands.

LB: They both know what they're doing.

Do you think it's important for bands to have management at such an early stage in their careers?

LB: To a certain extent. I know bands who've been plugging away for three or four years and got nowhere purely because they didn't know how to. Having Conrad and Dave working behind the scenes allows us to concentrate purely on making music and playing shows. In terms of creativity, we're 100% independent, and I think that's what most managers are looking for nowadays. Bands that can be self-sufficient. We didn't have any money when we launched our first EP. We literally had to scrape every penny together we had between us. The record itself cost nothing because we made it in Steve's (Evans, bass player) room.

Having played so many shows this year, are there any new bands you've been impressed with that you'd recommend Drowned In Sound and its readers should check out?

JM* We fully endorse this band from Doncaster called The Blinders.

LB: We met a band called Avalanche Party last night and they're great too. I really like Shame as well. Also Bad Breeding. They're not really a new band but they're still fucking amazing.

What advice would you give to new bands that are just starting out?

LB: Rehearse! Be independent. Do everything yourself. We did our own production, our own videos, booked our own gigs. We did absolutely everything 100% ourselves.

JM: Stay at home for a bit. Learn about production and how to record properly.

What inspired the videos for 'Kevin' and 'Dinner Lady'?

JM: We did 'Kevin' collectively. It was just them lot getting steaming!

LB: It's meant to be about a mad urban scientist that creates this band called Cabbage by brainwashing these kids.

You've probably been asked this question far too many times but Cabbage... What inspired the name? Was it the first one that came into your heads?

JM: I hated the name for a long time, but the others thought it was a good thing, so we stuck with it.

LB: People either love it or hate it. We said that from the start. It stands out.

JM: It seemed to work for us at festivals this summer. I think the name made people curious to check us out.

LB: We've had so many people come up to us at shows and say, "What kind of name is that? Fucking Cabbage!" You know, what has the world come to when bands start naming themselves after shit vegetables. We actually have to promote cabbage now. We've got a deal.

For more information on Cabbage visit their official Bandcamp and Facebook pages.