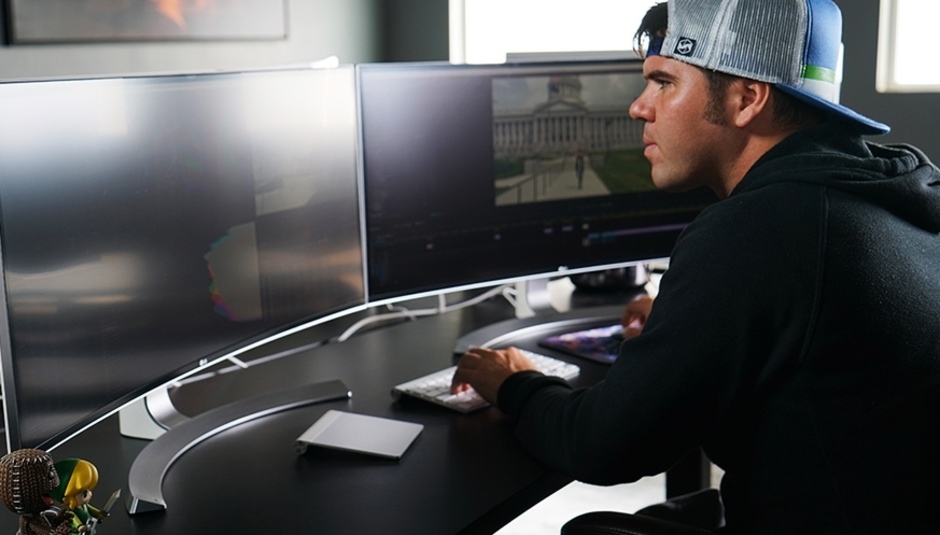 Growing up in pre-internet times, everyone knew someone with a video camera who captured people doing crazy things. Whether it was bike tricks or leaping off bridges or fitting their fist in their mouth, there was grainy footage of it and we would run home to gather around the TV to watch the footage. Ninety-nine times out of a hundred it wouldn't look anywhere near as impressive as it felt in our imaginations. Partly, this was to with the technology and our knowledge of camera angles being too basic, but mostly because we weren't able to watch, adapt, evolve and keep practicing the tricks until we could make them dramatic.

Times have changed, and then some. Nowadays everyone has a cameraphone to capture footage, but still there's a huge gulf between the have-a-go point and shooters, and the pros who film, learn, adapt, evolve and keep shooting until they blow people’s minds in such a way that they amass millions of plays and huge subscriber bases.

When you think about how far we've come in such a short space of time, it's little wonder that the YouTube stars of today are now big enough that there are entire events dedicated to meeting the people behind the viral hits. It's incredible to think that for all the video that is uploaded there are still these shared experiences that feel a bit like huddling around the kid across the road's telly box.

Part of the charm of YouTube is knowing that it could be you. Being aware that it’s human beings capturing magic and beaming it into our monitors through the wonders of technology makes the entertainment experience feel genuine, even if it doesn't always look homemade.

The professionalism of YouTubers is leading to a race to outdo the competition an increasing shift from competent to mind-blowing production techniques. How do you blow everyone else out of the water, onto a platform, down a slide and backflip your way into internet stardom?

Take Devin Graham for instance – the videographer, editor, producer and overall renaissance man behind the hugely successful Devin Super Tramp channel. Devin’s learnt a lot over the past 5 years whilst building his 4 million subscribers and - in partnership with LG - has kindly shared some of his knowledge to help aspiring YouTube stars up their game. With his advice, you can become what Devin describes as ‘seriously professional’.

“If I wanted to get noticed, I had to be different,” Devin says. That’s exactly what he’s done in the five years of posting to YouTube. Just look at this, one of his latest videos, which he edited in his Provo, Utah studio using the new LG UltraWide® 21:9 monitor:

“When we go out on location, we're basically getting all the paints possible. Then we get into the editing room, and that's when we start painting and basically exposing that canvas we want to share with the rest of the world. We need the biggest canvas possible to tell those stories”, explains Devin. For the video, the Super Tramp team reached out to some of the world’s best Pogo riders – Dan Mahoney, Dalton Smith, Nic Patino – to make it happen. “It's all about pushing the human boundaries, because you want to grab people's attention. Every time we work on a different project, it always blows my mind as far as the amazing talent out there.”

Devin got his start when he was just getting out of diapers, making music videos with his siblings as a child before moving onto stop-motion Lego movies. After enrolling at Brigham Young University’s film school, he met the team who would become his partners on the Super Tramp team and they launched the channel together. Always ahead of the curve, Devin shot those early videos with pioneering new technology, the GlideCam. “It allowed me to get these super smooth shots. It allowed me to pioneer a new technology.”

Over the years and hundreds of videos later, the Super Tramp team not only developed a visual style but also a niche in storytelling: adults doing kid-like activities and making it larger than life. “For us, it's all about figuring out what stories are going to connect with people. I always ask myself, ‘Is this something that I would want to watch?’ I feel that's what makes the best ideas, the things that connect with us when we were children.”

For Devin, the YouTube channel has now become a way to communicate with his viewers. “We try and do everything we can to give back to them because they’re the ones that are giving us the views.” And that includes creating special behind-the-scenes and tutorial videos to help his fans learn the tricks of the trade. “I honestly love that relationship, I love giving back, and I love all the e-mails we get from people saying, ‘You changed my life. I’m doing what I love to do.”

Watch Devin Graham at work behind-the-scenes on the extreme Pogoing video below:

For the video, the Super Tramp team reached out to some of the world's best Pogo riders – Dan Mahoney, Dalton Smith, Nic Patino – to make it happen. “It's all about pushing the human boundaries, because you want to grab people's attention. Every time we work on a different project, it always blows my mind as far as the amazing talent out there.”

WHAT DOES SERIOUSLY PROFESSIONAL MEAN?