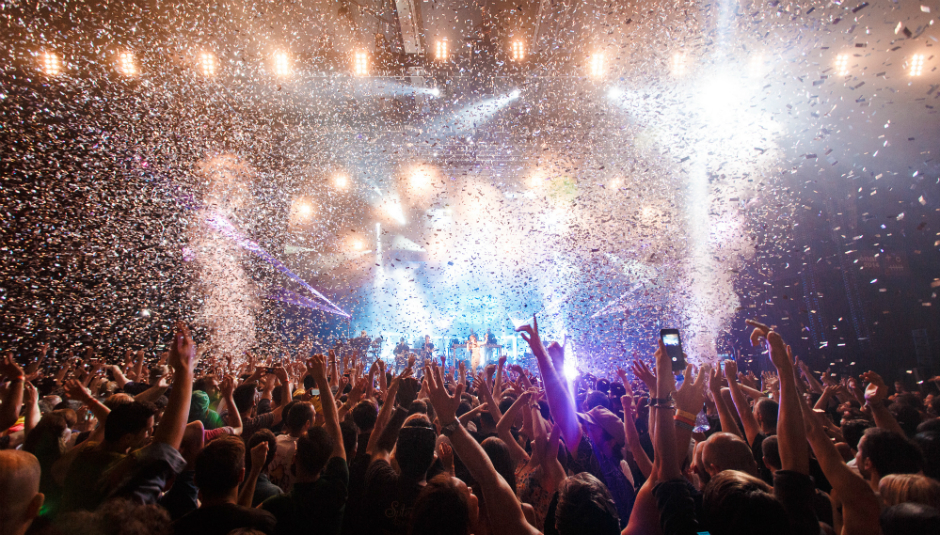 You may feel relaxed at present. You’re thinking about going with the flow and seeing what happens when you get there. As soon as you get your printed timetable of who's on where, and when, and as you collect your wristband, quite possibly everything will change – your laid back cool may go out the window, and out comes the pen and paper. You’re like a kid in a sweet shop – you set yourself an exhaustive list of acts to go and dance to for 15 hours a day. Making the right decision and finding artists that have something truly special is vital if you’re going to keep your energy up for Sónar, which is surely one of the world’s most fun festivals. Fortunately for you, though, it’s probably the only proper decision making you have to make all week – hard life, eh.... So, to make life even easier for you here are ten acts that definitely won’t disappoint. Here’s to a great week in the sun!

Towards the end of last year, New Order released Music Complete, their best album post-reformation. As such, 2016 is a great year to go and see them, as they’re more on form than when they played the festival back in 2012. Moreover, the new material is highly suitable for Sónar as they’ve relinquished the guitar sound of their previous two albums in favour of a bolder embrace of dance music. Of the record, album editor Andrzej Lukowksi said: “[It’s] the most energetic and polished thing they’ve turned in in an age, and the most melodic.” Hopefully, there’ll be some crowd pleasing Factory Records classics thrown in there for good measure too.

One of the younger acts on the bill, he’s slightly below the average age of the English football team. The 23-year-old, who was born in Haiti yet raised in Montreal, and who goes under the moniker Kaytranada, has had the music industry frothing at the mouth with debut album 99.9%, released on XL Recordings back in May. Anderson, Paak, Vic Mensa, Little Dragon, Syd, Craig David, AlunaGeorge, and Badbadnotgood were just some of the contributors. The overall sunny feel to the bass-driven, Madlib-esque beats and neo-soul vocals will be the perfect soundtrack for the laid back ways of Barcelona.

The album Hopelessness by ANOHNI, who's also known for her work as the lead singer in Antony and the Johnsons, is an early contender for album of the year. The record features co-production from two of the best leftfield electronic music acts of the 21st century, Oneohtrix Point Never and Hudson Mohawke. It will be fascinating to hear such powerful beats coupled with lyrics that actually mean something. In a fashion that would make Noam Chomsky proud, she sings of the truly pressing issues of our time, such as ecocide, drone warfare, and surveillance – yes, it’s not for the light-hearted. Plus, it’s not an act you can see easily whenever, as they’re making very few live appearances this year.

A band with jazz roots, and whose love of hip-hop, soul, funk, and beyond has led them to craft a buoyant sound that they can call their own. Past collaborations with the likes of Tyler, The Creator, and Frank Ocean will have earned them a spot on many peoples must watch list. What’s exciting about seeing Badbadnotgood at present is the opportunity to hear material from their bewitching, forthcoming new album, which is simply named IV. It’s out next month via LA tastemakers and all round good egg of a label, Innovative Leisure, and features mouth-watering collaborations with the likes of Sam Herring, Colin Stetson, Kaytranada, Mick Jenkins, and Charlotte Day Wilson. Less fleeting news about the band in terms of their collaborators is the new addition of Leland Whitty on sax, viola, violin, and guitar, who’s become a permanent fourth member this year.

Four Tet’s putting in the graft this year with a seven-hour set on Friday night between midnight and 7am. How much of his own stuff he’ll play, who knows? But one thing’s certain; he has incredible taste and a broad knowledge of so many genres that whatever makes his setlist is bound to be something carefully chosen and special. Considering the time of his set, it’ll be pretty high octane for the most part. The great thing about seeing a DJ set this long, too, is that it gives the artist the opportunity to take ravers on a hypnotising, euphoric journey that wouldn’t be as possible during a short show.

Gazelle Twin secured album of the year in the Quietus in 2014, and it scored highly on Drowned in Sound, too, with writer Tristan Bath greeting it with a generous 8/10 review. Summarizing, he said: “Unflesh is a truly brilliant piece of work, and the sound of an artist trailblazing through as of yet uninhabited territory - here's hoping it's only the beginning.” Fortunately for Tristan – and for Sónar – Gazelle Twin is back. They’re set for a trailblazing audio-visual performance called Kingdom Come that's more than a gig; there will be theatre, music, strange treadmills, and visuals evoking the dystopian worlds of JG Ballard, all of which sounds fascinating. We’re curious to see how it will all come together.

The most famous Barcelona-based DJ in the lineup, and as a local lad, John Talabot is bound to draw a huge crowd to see his spacey house/techno show. The energy that will emanate from his epic 5am slot at SónarPub will be a sufficient replacement for sleep (we hope). We suspect there’ll be some snippets of material he’s working on for his highly anticipated second album. His debut, fIN, received a rare 9/10 review in DiS, meaning he’s absolutely one of the best in business.

The grime MC who’s helped usher the genre to the forefront of the industry thanks to razor-sharp rhymes delivered with vigorous energy and heavy beats. He was triumphant at Field Day, despite sound issues at the beginning of the set, and fortunately Sónar will be more than equipped to ensure the full bass sound is delivered properly for a set that will have the intensity of a whippet chasing a rabbit.

65daysofstatic wrote the music to the new PlayStation 4 game, No Man’s Sky, and they’ll be doing a very special performance of it at Sónar by Day. Their music, played by live drums, guitars, synth, and samples, suits the epic and expansive terrain of the game – and it’ll be mind-blowing to see it live. At the very least, it'll be an absorbing respite from the more commercial DJs people will be losing their minds to.

All three members of Ninja Tune-signed King Midas Sound, including experimental dub master Kevin Martin, who is also known for his work under The Bug moniker, will take to the stage with Chiristopher Fennesz for this project. Fennesz has earned huge respect for his use of guitars in electronic music, and the exploratory soundscapes they craft together in this collaboration will be perfect the more discerning listener. These otherworldly, ambient flourishes are something that’s likely to make an impression on you for long after they’ve left the stage.

Barcelona can be a city suited to a more leisurely pace, where things can be endlessly postponed till mańana. So, if that sounds like your approach, head down to see Congo Natty live in the sun. With an array of guests on stage to help beam energy, expect an infectious set that will have Sónar on its feet to every beat – this is UK Jungle music with a dub flavour at its very best.

Ivy Lab have a spaced out, psychedelic side that utilises the constant pulse of drum 'n' bass, but they also have more full throttle material, making for a more dynamic listening experience. The London trio, who are also known by their solo names Stray, Sabre and Halogenix, were seen by Mixmag journos at Outlook, who said they were so good that they basically stalked them and saw them play three times - which is a huge compliment.

London-based house producer Leon Vynehall, who’s written some of the most original and imaginative electronic crafted this decade, will headline the Secret Sundayze party - the pick of the Off Sónar events this year. It takes place on Sunday when the main festival is over, so it’s a perfect way to continue all the fun. This is not only down to the great line-up but the venue, La Terrazza, which is a mountaintop castle converted into a club, offering pristine views of the sunrise. What better way to cap off the weekend?

Lift To Experience Live At The Royal ...