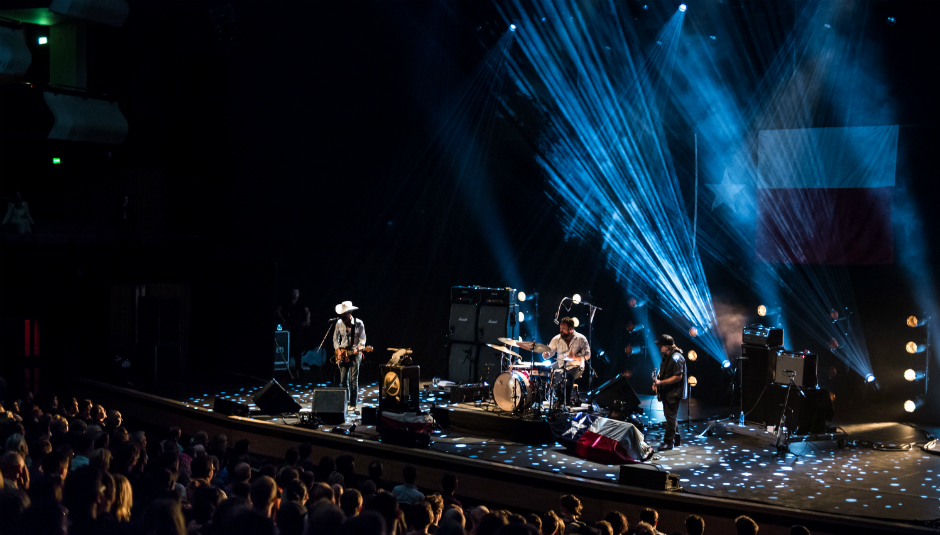 Lift To Experience Live At The Royal Festival Hall

Lift To Experience Live At The Royal Festival Hall

It’s been fifteen years since Texan post-rock trio Lift To Experience graced a stage together. Since then, lead singer Josh T. Pearson has become something of cult-hero with his stark but beautiful take on country music and honest, no messing live sets; it doesn’t hurt that Pearson is also the owner of one of the sharpest wits in music today. In those fifteen years, fans of Lift To Experience’s seminal debut, and so far only album, The Texan Jerusalem Crossroad, have hoped for a reformation. Tonight they get their wish.

When I walk into the Festival Hall it is silent in reverence. There’s also that feeling you only get at a cup final, or church. The crowd is nervous but expectant, and everyone is under no illusions as to what is about to happen; Lift to Experience are playing their first London gig in over a decade. Would all that waiting since their last gig, and money spent to get here, be worth it? But at the same time, the gathered are sure we’re about to see something special, and because of this the atmosphere is electric.

Support is provided by Kiran Leonard, a singer songwriter who, in the (un)conventional sense, has been making waves since he appeared bewilderingly on the musical landscape in 2008. His music is grandiose by design, even if it sounds scratchy and lo-fi. As Leonard stalks across the stage, you can tell he isn’t overawed by the occasion. To show this, before launching into the first song he kicks off his shoes, exposing his odd socks. At that moment, I felt a pang of jealously and guilt that I wasn’t wearing odd socks too. Opening with your biggest song makes sense; win the crowd over early and they’ll be more inclined to stick with you through the tougher, more abrasive parts of the show. However, when the song is ‘Pink Fruit’, all sixteen minutes of it, and it skews and snakes about like a drunk on the way home, you might be inclined to play it later. But Leonard goes with his gut, and it pays off; when he finishes the audience’s response is jubilant. While they might have come for Lift To Experience, they are definitely getting their money’s worth before.

Next up is ‘Oakland Highball’, Leonard joking that: “Don’t worry, this is a shorter one…” in his Lancaster drawl. Two minutes of disjointed guitars and syncopated drumming later, Leonard and co are on fire. ‘Don’t Make Friends With Good People’ is a stand-out moment, especially when his guitarist/keyboardist brings out a violin and delivers a devastating melody that nods to the venue’s historic past, yet plays with a contemporary style. ‘Secret Police’ is euphoric and bombastic, filling the Festival Hall with luscious melodies and deceptively tender lyrics. Given the strength of his latest album Grapefruit, and this set, Leonard could very well be the next Mercury Music Prize winner. Compared to the studio recordings, his live set is delivered at a blistering, break neck speed; it is visceral, but with a delicate touch that underlines all his work. And just like Grapefruit, Leonard’s set was rammed full of clever ideas, interesting wordplay, and scatter-gun time signatures, all appearing delightfully simple to pull off. When something looks this easy, you know it’s not!

After a short interval, we’re primed for the main event. David Axelrod’s ‘Holy Are You’ blares as drummer Andy Young and bassist Josh Browning take the stage, but when guitarist and singer Josh T. Pearson walks out, the crowd whoop and holler. As he plugs in his guitar and strums a few chords, someone shouts: “JUDAS”; without missing a beat, Pearson replies: “You’re a liar”, before someone else pipes up shouting: “Don’t fuck it up!” to which Pearson shrugs and the Festival Hall erupts in laughter. Axelrod is turned off and the show some thought would never happen begins.

As expected ‘Just As Was Told’ kicks things off, but is predominantly instrumental. Sounding like a plane taking off and with flashing lights that blind the audience, it’s a sensory overload and the perfect live introduction. ‘Falling From Cloud 9’ is up next, with ‘With Crippled Wings’ slightly segueing into it. Both show that despite not playing together for over a decade, Lift To Experience still have the ability to create valleys and peaks, and take the audience on an emotional journey. When they play ‘These Are The Days’, the lyrics seem more prophetic and apocalyptical than when they were originally written. “So we approach the end / When God judges man's sin / Yeah the time is running thin / Let the countdown begin / Four... three... two... one...” It’s the stand out moment in a set full of stand-out moments.

Unlike Pearson’s solo shows, there’s no patter in between the songs, no hilarious asides; the crowd are here to hear the songs they love. That being said, three-quarters of the way through their gargantuan set, Pearson starts to regale us with inside jokes, taking a picture of the crowd before informing the ladies: “All this could be yours ladies. Check me out on Tinder and Grinder” and telling stories of lost luggage containing anti-depressants. Before they launch into the final song, or “Another smash hit” as he puts it, he jokes that: “We only had time to rehearse seven songs” before the gig.

As ‘The Ground So Soft’ starts, a guy in front of me, in his forties, breaks down and cries. They are tears of happiness and relief. His friends just put their arms around him. This gesture sums up the gig perfectly; no words are needed to express our collective feelings of togetherness, elation, exhalation and despair that it will soon be over. ‘Into the Storm’ is the last track, and for ten minutes, Lift To Experience creat maelstroms of guitars, pounding drums, driving bass, and revelatory lyrics. When ‘Into the Storm’ finishes, the entire crowd gave them a standing ovation, before finally walking off. After a few moments the band take the stage again to deliver an instrumental jam track encore, the riff of which is simple and repetitive, reminding me of Spacemen 3 at their woozy best. And as suddenly as it started, it’s over.

There are downsides to the set however. Firstly, it didn’t start with the “Lone Star State, drinking their Lone Star beer” monologue; instead, ‘Just As Was Told’ just exploded into our ears. Secondly, they don’t perform everything from The Texas Jerusalem Crossroads, no doubt due to the length of the album, and the lack of rehearsal time they’d had. But these are minor quibbles; despite taking well over a decade to return to the UK for shows, the night is as exquisite as it is incendiary.

We all walk out knowing that we’ve not only witnessed an exciting young talent in Kiran Leonard, but that Lift To Experience played with the same level of passion and intensity that won us over fifteen years ago. On the way home, I keep thinking of that early heckle: “Don’t fuck it up!” As if they ever would! I just hope they don’t leave it another fifteen years though.

"I try to keep every show like its ow...