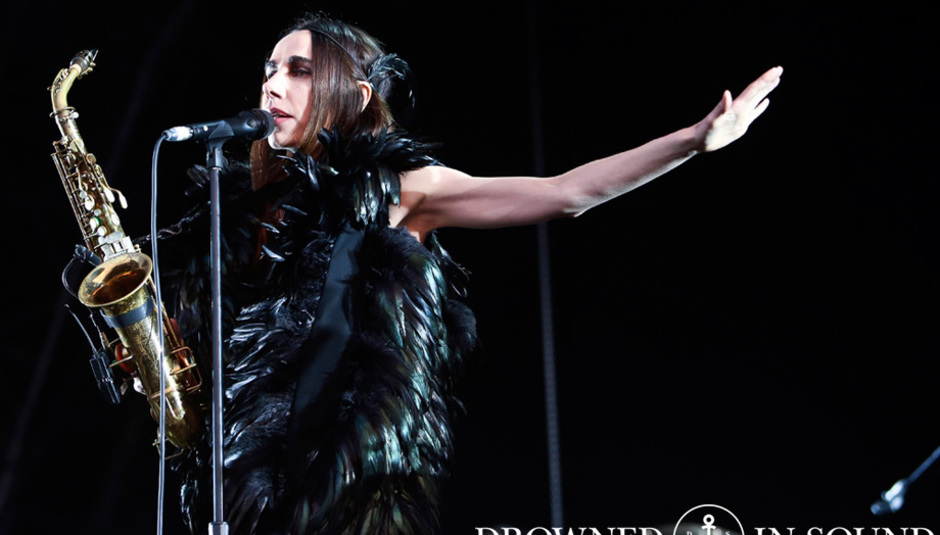 It rained a bit at Field Day this year, in the sense that it rained a bit on Noah in Chapter 7 of The Book of Genesis: 'The waters rose and they increased greatly upon the Earth'.

Okay, it wasn’t as bad as all that, but these were certainly sub-optimal conditions to be trudging round Hackney’s Victoria Park for the tenth edition of an event that has been somewhat misnamed since its expansion to into a weekender in 2014. Epic downpours saw fit to grace both days, but punters could at least take comfort in the fact that the city location would enable them to return their own – or if they were lucky another’s - bed, rather than to a grubby tent, each night. They could also delight in the impressive number of epic performances that graced the many stages laid out for them.

Skepta’s crowd certainly seemed unperturbed by the puddles of mud. His high energy grime set had an early-ish crowd in a frenzy, the London MC’s journey down from N17 to E3 proving more than worthwhile. Atlantans Deerhunter came considerably further for far less return. Their thought leader Bradford Cox managed to be significantly more entertaining when dancing about to their entry music than he was at any other point during their turgid set. On record, the band have often achieved a shimmering amalgam of off kilter riffing and joyous rock. For all their obvious technical skill, live they are a plodding cliché.

In the small but impressively programmed Moth Club tent, Ata Kak demonstrated that simplicity don’t preclude brilliant innovation. The Ghanaian’s appearance on the bill is something of a minor miracle. His long unknown 1994 cassette Obaa Sima having led New York DJ Brian Shimkovitz to set up the Awesome Tapes from Africa blog, then a label and, with the help of a Radio 4 documentary team, to track down the elusive musician and now to kick start his international touring career. Kak and his ragged band do not disappoint, his high pitched voice soaring over the highlife rhythms and squelchy keyboard repetitions mainly taken from that now seminal release. This is a gloriously upbeat dance party, a celebration that could and perhaps should have gone on and on. Kak headlined on a bill with Shimkovitz at the actual Moth Club the night before, and perhaps in a sense this show was really an after-show.

Dean Blunt takes a defiantly different approach to entertaining the same tent. The woozy, shapeshifting drift of his recent grime-infected Babyfather project, BBF Hosted by DJ Escrow, is played out against Blunt’s signature visual since his Hype Williams days – a shit tonne of dry ice. In addition, besuited heavies can be vaguely made out on each side of the stage and a pair of masked accomplices push through the crowd, one waving a Union Flag and the other distributing nitrous oxide in balloons with union jacks on the side. It is by now a well-rehearsed routine from Hackney’s perennial joker. It is nonetheless thrilling; the looped vocal sample "it makes me proud to be British" voicing a comical truth.

Back on the main stage James Blake seems comfortable in his role as a Saturday night headliner. His new material gets a solid reception, even if it does lack the frontal sub-woofer assault with which he made his name. He pointedly pulls out old standards ‘The Wilhelm Scream’ and that magnificent Feist cover ‘Limit to Your Love’ as his set closes. That devastating bass echoes across the park, proof the sound issues that dogged Field Day’s early years are well and truly behind this festival.

On day two, Adam Green ends a jolly set thankful to the sunshine for doing little to dry the pooling mud left the night before. It will be only a couple of hours until the rain returns to put paid to any hope of that. A fez on his head and a cast on his left hand, Green looks and sometimes sings like a man who has been out for far too long. He probably has, but he’s accrued a pretty nifty back catalogue in that time. From it ‘Drugs’ is a howled delight, and ‘Jessica’ remains a perfect delight, its central refrain – “Jessica Simpson / Where has your love gone? / It’s not in your music, no” – still funny even as its subject has faded from our consciousness.

Unsurprisingly, The Thurston Moore Group sound more than a little bit like Sonic Youth. This is no bad thing, of course. Moore and James Sedwards’ guitar interplay has developed virtually the same precision he and Lee Renaldo achieved over so many years. This tour's drummer does a passable impression of Steve Shelley, while Deb Googe’s muscular bass reminds us what an integral part of the My Bloody Valentine live experience she was. All in all it’s a bracing performance and Moore’s decision to plunder his solo work right back to 1995’s Psychic Hearts showcases the strength of his activity away from his erstwhile band.

Later Caribou’s Dan Snaith, under his Daphne moniker, delivers a fun-packed set of electro with a disco flourish, while Mbongwana Star are thrilling as they interweave irrepressible lines guitar and vocal. John Grant too is phenomenal; his display of faultless musicianship and hilarious lyrics putting a smile on seemingly everyone concentrating on what he’s up too. He comes damn close to convincing with his brag (in ‘GMF’): “I am the greatest mother fucker / That you’re ever going to meet / From the top of my head / Down to the tips of the toes on my feet”. Moon Duo’s circular riffing recalls a lot of the good things about both The Jesus and Mary Chain and Neu!, the moments I manage of AIR are tedious.

All this pales in comparison to the final act of the evening, whose day this really is. PJ Harvey wears a short black dress and is swathed in black feathers. She is flanked by an all male ten-piece band, heavy on the brass and featuring such luminaries as Mick Harvey, John Parrish and Terry Edwards. She is calm and stylish and devastating in every way. The bulk of her set comes from the new record, but it is that way that a line up designed to deliver that album’s near-military sound reconstitutes old material that most excites. ‘50 Foot Queenie’ and ‘To Bring You My Love’ were always monsters; here they are leviathans prowling up from the depths of this flooded park. It’s an exceptional end to a fine weekend. Field Day has come of age.