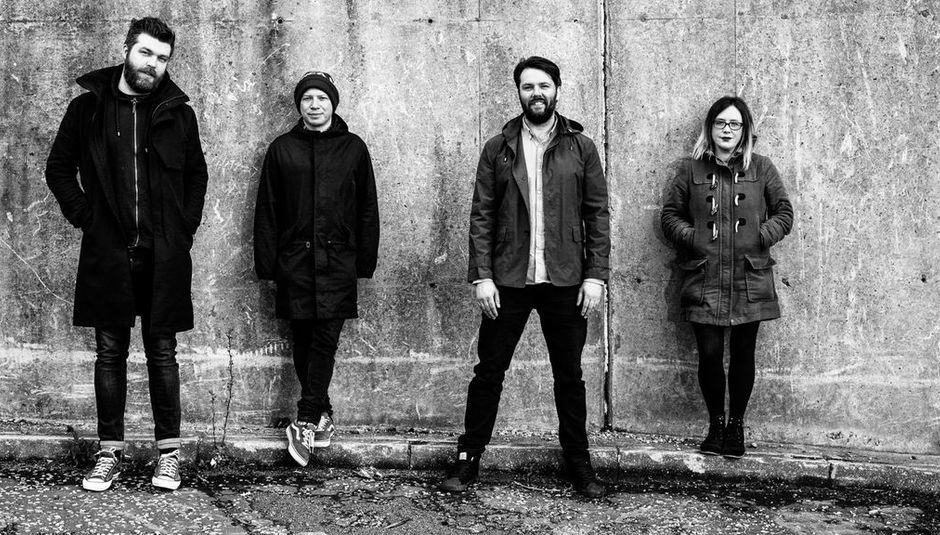 In our semi-regular feature around the equipment that some of our favourite bands use, Planet Gear, Minor Victories talk us through their collection of instruments and gadgets...

For the Minor Victories record the piece of equipment I used mostly was my Fender Coronado. It's a 60s hollow body guitar that I use most of the time in the studio. I never use it live because it feeds back because I play so loud. I could if I turned it down, but years of institutionalized belligerence prevent me from countenancing this on any level. I took it to Mauron for the Lost In France gig with Alex Kapranos, RM Hubbert, and Emma Pollock and everyone played it. Emma liked it so much she got one when she got home. Fender Coronada: choice of the (Glasgow independent music scene) stars.

The microphone I used for recording the Minor Victories album is a Neumann TLM102, which is a condenser mic, therefore it picks up the breathiness and nuances in my voice well.

My vocals were recorded into Logic Pro on my Mac via the Focusrite Scarlett 2i4 audio interface. At source we didn't go through any compressors or preamps. All this was added at the time of mixing.

Early on in the process I would put all my ideas and parts together at home on a pretty simple setup, a laptop using either logic pro x or Protools, an apogee duet or Digidesign 003XL and some old Mackie powered monitors so nothing too fancy at all. 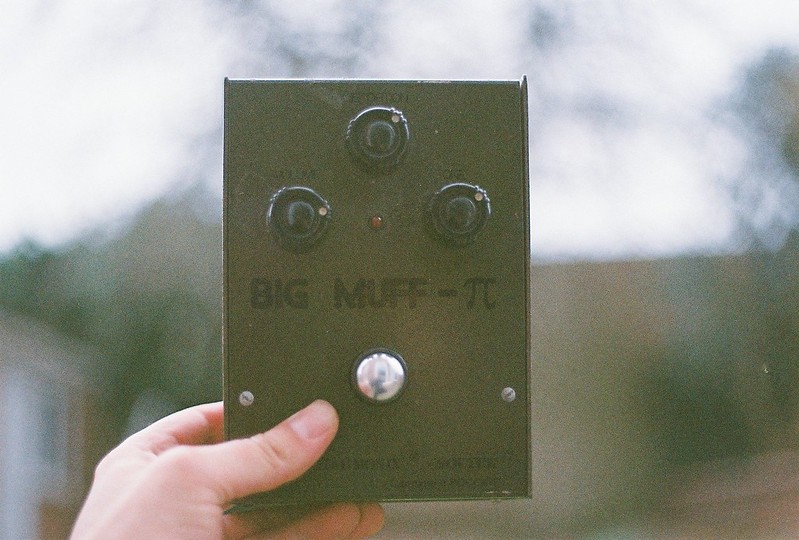 Guitars wise I would use my trusty '78 precision, my Jag bass and, for a while, I used a Bobby Burns guitar and that’s about it. Most of the time the guitars went straight in, so no live amping etc. and used the onboard preamps.

Some of the drum parts were recorded at a friends studio, and even then it would be minimal mic set up on a Gretsch jazz kit, but then I would be able to run it through some nice outboard kit that he has. This would all then be digitally shrink wrapped into a folder and sent via WeTransfer to Justin to chop up and sort at his end!

Quite late on, when a lot of the arrangements were taking shape, I went up to Mogwai's Castle of Doom and, under the watchful eye of Mr Tony Doogan, rerecorded most of my bass parts and a guitar part or two on cogs.
I guess throughout the whole process my go to piece of kit has been the Sovtek/Electro Harmonix Big Muff Pi. Its an amazing pedal, I love the warmth and low end it retains whilst still being a big fuzzy beast! lt was used on most, if not all, of the tracks I reckon.

This is a Custom 77 'Watcher' Guitar... I don't actually know much about guitars at all, despite being a guitarist. I do know, however, that it sounds fucking immense. It was made by a dude called JB over in France. I saw Rachel playing a Custom 77 with Slowdive and she introduced me to JB. It’s the only guitar I used on the making of the Minor Victories album, and the only one I play on the live show.

So I built a new collection of pedals for this band... and they're pretty straightforward.

This is my favorite pedal on the board. The 'Altar' By Nine of Swords. Ultimate fuzz. The one you put on at the big bits. 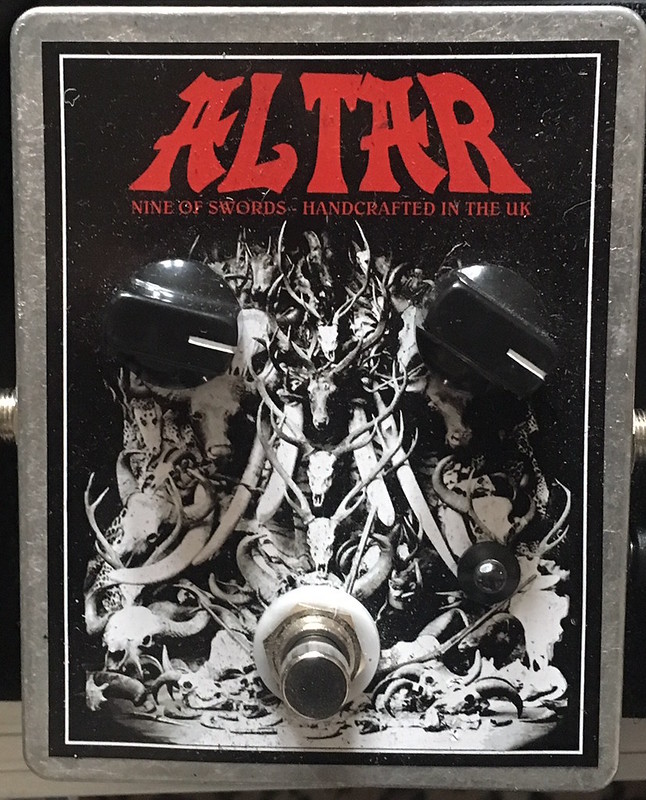 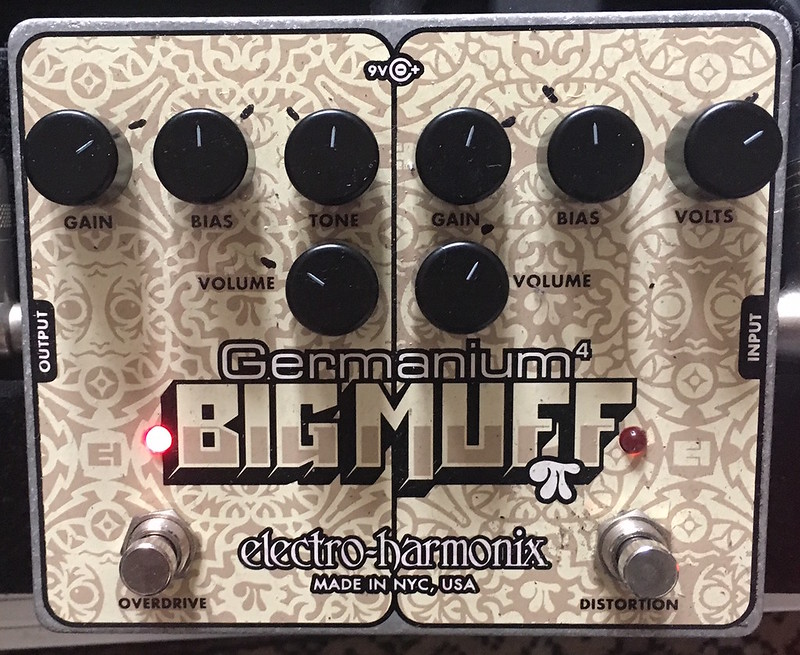 Back To the Future Pedal. Again more variations of fuzz / dirge. Made by 4114 Effects. Sounds great. 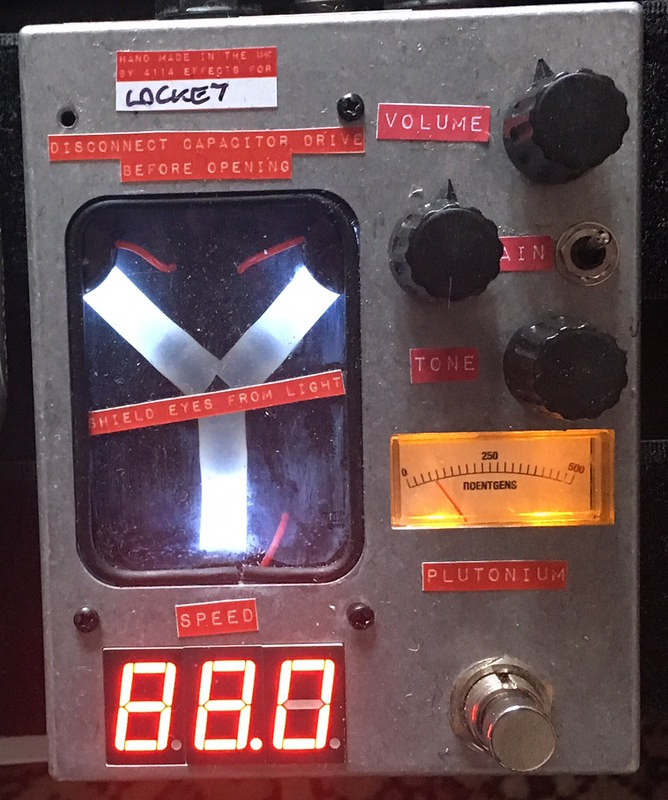 Rat by Pro co - I’ve used a Rat pedal in every single record / band I’ve played with / made. It’s the go to pedal on any pedal board I use. 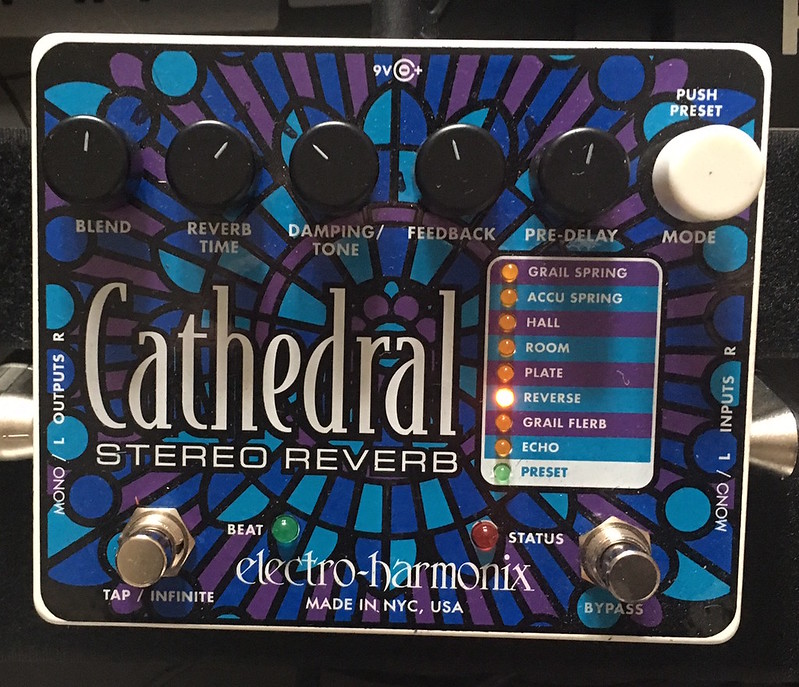 A Challen 988 Piano. It cost more to get it delivered than to buy the thing itself. I love it; it’s a bit wonky in the tuning world, but sounds great. I use a Pair of Rode NT5's to record it, plus whatever other mics I have laying around. 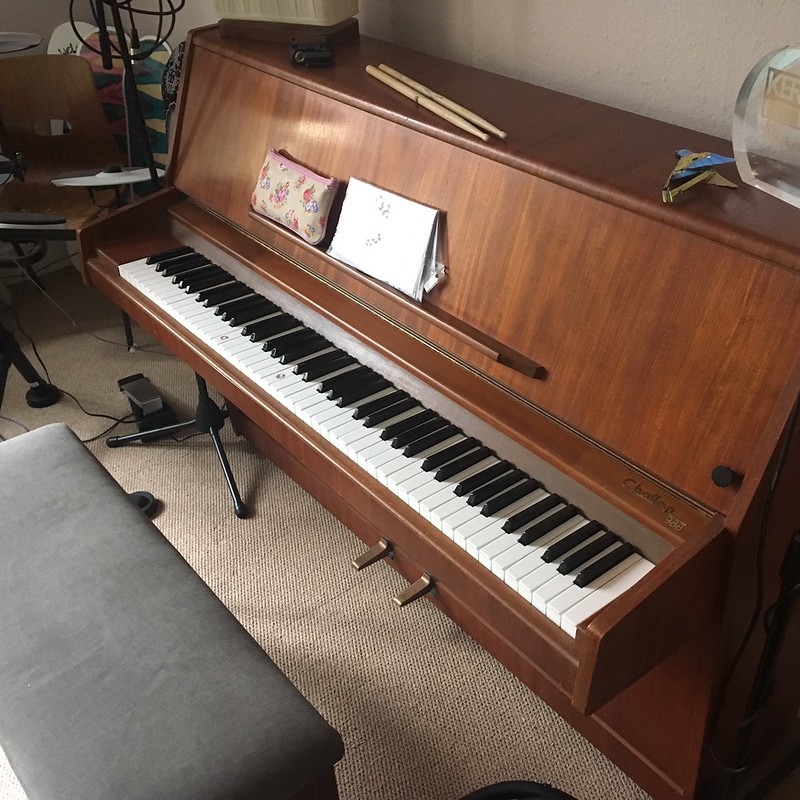 Studio Stuff And Other Bits And Bobs

This corner of chaos is where all the magic happens. Its quite a minimal setup, consisting of… 1 x MacBook Pro 1 x Apollo Quad Core interface by Universal Audio 1 x Big midi keyboard thingy by Native Instruments. It has lots of lights that flash and loadsa of twizzly knobs and buttons on it. 2 x Big G Raid drives. 1 x small retro-looking turntable thingy. 1 x 32-inch plasma screen TV that I use as a monitor. 1 x Beats by Dre headphones for when you want your mixes etc. to sound better than they actually are in real life. 1 x Pile of books. 1 x Set of Roland studio monitors. Which I adore because if anything sounds good through them, it will sound brilliant everywhere else. 1 x Comfy studio chair. 1 x assorted notebooks with scribbled notes about parts / files that never make any sense or get looked at. 1 x assorted scattering of wires which aren't attached to anything, but I can’t throw away just in case they're really important. 1 x tea mug 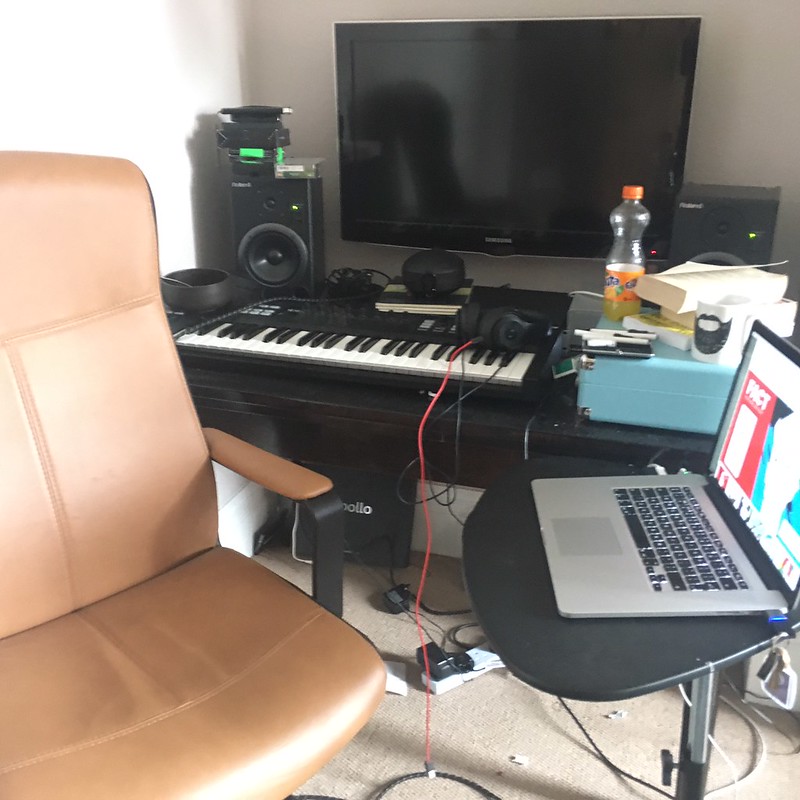 In general terms, I have never used loads of equipment and have always tried to make records where there is an element of restraint which forces you into thinking creatively as opposed to buying a shitload of gear to smother your records in a shit load of ill-judged and questionable FX. I have no need for massive space echoes, or tape echoes, or any of that stuff. I use minimal plugins, mainly just a handful of the Universal Audio ones that are processed by the Apollo interface (mainly EMT 140 reverb / Neve 1073 / Studer tape machine.) Everything else just gets recorded properly, which I feel is just a better option overall when making records.

I use Pro Tools 11 to make records. Not because it's easy or this or that, but mainly because I started out years ago using Pro Tools and have never bothered to change. I saw someone messing around with Ableton the other day, which looks like an iPad app my kids would play on. It's probably great, and loads of cool records are made on it, and DJ whatever his fucking name is uses it, or whatever and ya ya ya. I care not. I also find Logic somewhat Illogical.

Aside from that, I’ve used this really cheap electronic drum machine a few times. 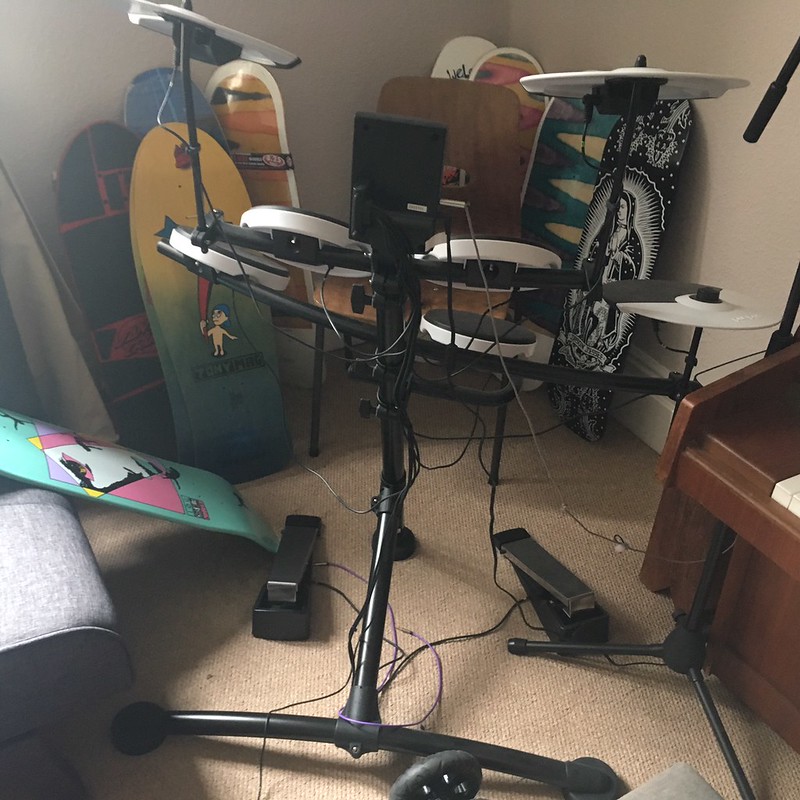 And I also delved into what I call "miscellaneous corner" quite a bit on this record. Where good instruments that don't get looked after properly go to die, but mostly end up being really important pieces in making records. Things to Note - The UHER tape machine and Cello.