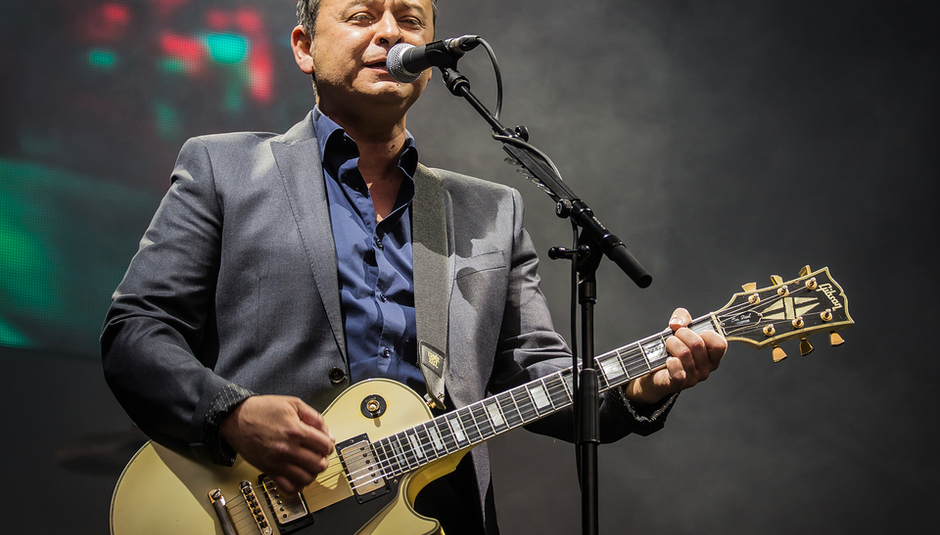 Manic On The Streets of Swansea: Everything Must Go at 20

Manic On The Streets of Swansea: Everything Must Go at 20

As difficult albums go, they don't come anymore so than Everything Must Go, released in May 1996, fifteen months after the disappearance of guitarist Richey Edwards. As poignant and traumatic as it must have been to make, it heralded a seachange both sonically and commercially. Finally hitting the platinum sales target the band had set themselves four years earlier upon debut Generation Terrorists' release (it has currently tripled those figures). Everything Must Go proved to be a landmark album for the Manic Street Preachers, gaining them a whole new audience in the process.

Regularly described as the starting point between the old and new brigade of Manics fans, one thing most agree on is the unerring timeless quality of each and every song. Produced by Mike Hedges, who'd go on to work on their next two albums, it's a cavalcade of emotions, ideas, and musical styles, lyrically portentous and anthemic in stature. If it wasn't for the album that preceded it, this would be the undisputed jewel in the Manics admittedly impressive crown.

So it was no surprise when the band announced a string of dates playing the album in full to commemorate its twentieth anniversary. Having been down that route once before for its predecessor, The Holy Bible, last year, it shouldn't prove too difficult a task to initiate. Even though some of these songs have rarely been performed since its release - 'Removables' and 'Interiors (Song for Willem de Kooning)' being two that spring to mind - Everything Must Go has a celebratory quality about it even if the underlying sentiment is anything but.

Choosing to play The Liberty Stadium, home of Swansea City Football Club as the venue for the tour's grand finale proves something of a masterstroke. Rarely used to stage events of this kind, its salubrious confines make it one of the more intimate stadium venues - if any others exist - with no vantage point being too far from the stage.

Beforehand, the surrounding streets and bars are littered with people dressed in what's now become familiar Manics attire; feather boas, leopard skin coats, skinny white jeans, and some exceptionally rare band t-shirts from their early days adorn many of those here to witness their heroes' biggest headline show on home turf since 1999's Manics Millennium extravaganza in Cardiff. The sense of camaraderie is extremely good natured before, throughout, and after the show, with English accents like yours truly greeted with "Where Are You From? Manchester?" more times than some of us care to mention.

Public Service Broadcasting opens the show. While some might deem them a strange choice both musically and aesthetically, it's worth mentioning bands like The Enemy, Starsailor, and Elbow have all supported the Manics in the past. And PSB have also opened for the band before, on 2013's Rewind The Film tour. They also have another similarity in that they make music for outsiders which doesn't fit in with any pre-ordained scene or genre. Sure, there's an element of kitsch about them, not least with the sampled voiceovers or when the brass section do a synchronised dance routine at one point, but they are nevertheless well received by an audience not always renowned for making life comfortable for support acts, and 'Spitfire' is a bonafide tune whatever the setting.

Next up are Super Furry Animals, who unsurprisingly receive a heroes welcome. Dressed in regulatory white boiler suits, their fifty-minute set is jam-packed with wall-to-wall hits, themselves spanning almost a quarter of a century. '(Drawing) Rings Around The World' and 'Do Or Die' elicit the friendliest moshpit we've ever encountered, while 'If You Don't Want Me To Destroy You' and 'Juxtaposed With U' bring the communal singsong to Swansea. Recent single 'Bing Bong' is played live for the first time this evening, and there are even outings for 'Demons' and 'God! Show Me Magic', both rarely played in the flesh these days. The familiar strains of 'The Man Don't Give A Fuck' closes the set, Gruff Rhys holding up sign boards asking the crowd to applaud and go apeshit before the whole band head off for a mid-song costume change. As warm-up acts go, there's probably no one more befitting of an event such as this, and even a few drops of rain during 'Hello Sunshine' (typical!) don't dampen the crowd's spirits.

When James Dean Bradfield takes centre stage to sing the opening verse to 'Elvis Impersonator:Blackpool Pier', Everything Must Go's poignant opener, 20,000 voices sing in unison. At the songs' chorus, rhythm section Nicky Wire and Sean Moore join him along with long-serving backing musicians Wayne Murray (rhythm guitar) and Nick Naysmith (keyboards). Neon lights flash and the song's refrain "It's so fucking funny, it's absurd" finds itself bellowed back feverishly by the now delirious throng down the front. Joined by a string section for unofficial Welsh national anthem 'A Design For Life', which takes an unfamiliar second slot in the set due to its placing on the album, it proves to be one of those moments where all demographics, nationalities, and classes come together. Only 'Common People' by Pulp can create anywhere near this kind of undying devotion to the cause, and it's lapped up by all and sundry both on and off stage.

Playing the album in chronological order does entail some of the band's best-known songs being delivered early, so when 'Kevin Carter' and 'Everything Must Go' are also dispatched in the first twenty minutes of the show it proves momentous. James Dean Bradfield's solo acoustic rendition of 'Small Black Flowers That Grow In The Sky' - one of the last songs written by Richey Edwards before his disappearance - is both poetic and heartbreaking. Met with complete stonewall silence throughout, it's this kind of mutually administered respect that makes a Manic Street Preachers gig like no other. Rapturous cheers greet its ending, like two football teams breaking away after 'Abide With Me' before the cup final.

What's most encouraging is how some of Everything Must Go's lesser played songs are received. 'Removables' and 'The Girl Who Wanted To Be God' find themselves sung back word for word, as does 'Interiors (Song for Willem de Kooning)', which surely must go down as the one song off the album which should have been a single but wasn't. 'Australia' is playfully introduced by Bradfield as 'Ospreylia' after the rugby team who share The Liberty Stadium with their footballing compatriots, while 'Further Away' and 'No Surface All Feeling' bring the first set to a monumental close.

Taking a five minutes break before James Dean Bradfield returns for his de rigueur acoustic solo slot, 'Ocean Spray' and a cover of Andy Williams' 'Can't Take My Eyes Off You' are delivered impeccably. Rejoined by the rest of the band, including Nicky Wire now changed into his customary white suit and sailor's hat, they dive into 'Motorcycle Emptiness' with gleeful abandon. 'Walk Me To The Bridge' and 'Your Love Alone Is Not Enough' follow suit before 'Together Stronger', the official song for the Welsh football squad at this summer's European Championships gets its first-ever live airing. Unsurprisingly, the "Come on Wales!" part of the chorus is screamed back deliriously by their adoring fans, Bradfield cheekily singing the words to 'Can't Take My Eyes Off You' once more at the song's outset.

This tour has seen a couple of blasts from the past restored to the set, and Generation Terrorists' rocker 'NatWest-Barclays-Midlands-Lloyds' and 'Roses In The Hospital' from Gold Against The Soul make a welcome appearance that seems as enjoyable for those playing the songs as it does for us out front being fortunate enough to hear them. The Manics have never been averse to slotting the odd cover or two into their set, and Fiction Factory's 'Feels Like Heaven', described by Bradfield as one of the first seven inches he ever bought from Woolworths, gets the treatment here. Although staying close to the original, it's a buoyant rendition, particularly during the chorus, where Bradfield delivers Kevin Patterson's distinctive high notes in admirable fashion.

A closing double whammy of 'You Love Us' and 'If You Tolerate This Your Children Will Be Next' bring the show to a majestic end, and there's even time for a firework display as the audience disperse into the night. What's most apparent about tonight is how the band seemed to enjoy every minute of it compared to The Holy Bible shows last year, which understandably must have been a tortuous experience. It goes without saying that this will be added to the Manic Street Preachers list of triumphant live performances but then, since they burst onto the scene unsuspectingly at the tail end of the 1980s, we've come to expect nothing less. Simply wonderful.