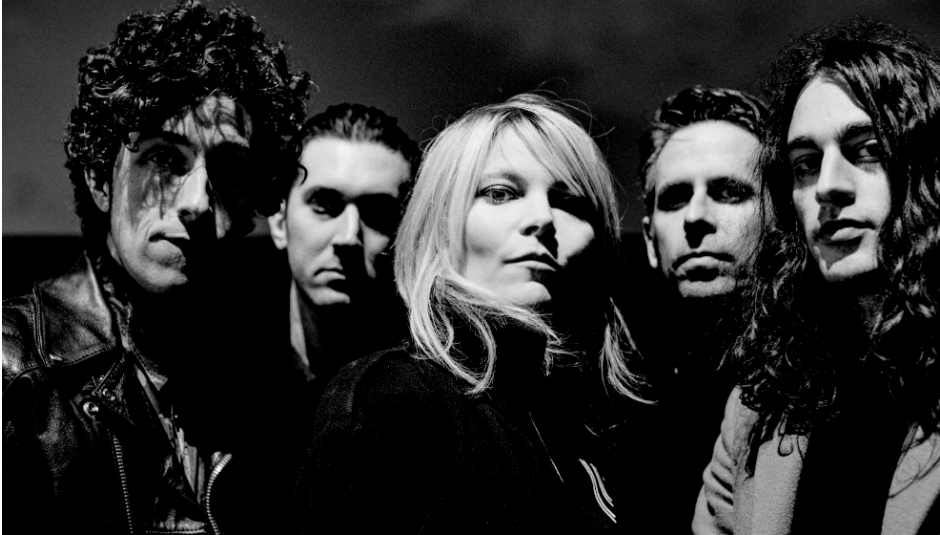 London four-piece The Duke Spirit are back with their fourth album KIN out now via Red Essential. Frontwoman Liela Moss talks us through the new album, track by track...

This track is all about hypervigilance, watching a space and a person, experiencing the subject and object sliding, morphing back and forth in focus...different aspects of the scene become important, arousing, beautiful, compelling. Nothing is said, people are full of mystery and as the sun moves, their shadows move along the ground, dragging your thoughts with them. A few people in particular had this effect on me over a long summer, and they remain in my thoughts.

A eulogy of sorts to an especially kind and beautiful woman who was a good artist, selfless wife - twice - a devoted mother, and a loving step mum to me.

I suppose this track is me circling around thoughts about damaged people, addicts, unhappy people, depressed people who need love and who crave confidence. Noticing birds at the window and thinking about the unfathomable contrast of their tiny lungs and then the big volume of their singing. On the one hand, I consider the fragility of these tiny creatures, but on the other there they were, loudly heralding a new sunrise. If only every crushed human spirit could find that inner resource, that warbling happiness. Staring at whatever birdlife was out there, I thought about Bowie in 'Man Who Fell To Earth', and remembered something I'd read about him using those staccato, sudden, jerky bird movements as inspiration for his body language on screen as the newly-landed alien on earth.

Holding and gripping onto an idea for too long can be destructive. Letting go and free-falling can become a good thing. Letting go of the need to control. The allure of ditching the master-plan in favour of spontaneity. Something about loosening one's grip. Not entirely sure how it fell together; Luke had a demo he had titled 'Hands' so I went with that word and kept it as it inspired that symbol of the tight grip.

Obviously Physics would explain most of this, BUT my muse for a few evenings whilst this song was forming was Evaporation. It was cold everywhere in the house where we wrote this, in rural Somerset. Having a steaming hot bath was the only way to get through the evening. I'd watch the steam evaporate. Where did that energy go? Firewood up in flames. A pile of grey ash in the morning. What about all the heat and those jumping flames? All gone, energy transferred, rolling on to take some other form. What about the energy that continues on but is formless, we can't see it, quantify it? Is that where my dear love has gone? Death is not the end; and other thoughts.

Bored. Knackered. Full of desire, no satisfaction. Longing for a perfect resolution, but it all seems unlikely. I think back to some recent touring across some long distances. I rudely didn't say goodbye to so many places. Just used them up, squandered my time, and exploited their hospitality. What next, I wonder? I hope for something extraordinary but know not how it will come.

There is a Ryan Adams' song I love called 'Come Pick Me Up'. Adams bemoans someone who has broken his heart and stolen all his records - or might do that in the future - I'm not so sure on the past or future tenses of his narrative, but that's the rough impression. The lyrics to Anola are - possibly - a kind of attempt to retaliate. Tell it how it is from the other side. This guy, this lover in his song, is always off. Never present. Rolling in and out of the city. Neglectful. So, I suppose this is just a reverie about what I'd sing back to the sexy, hoarse, fuck-up guy in the song 'Come Pick Me Up'.

Separation Aint True! We are all one consciousness! This could be the truth?! We experience life on earth to exercise free will perhaps and find that love is the only path back to one love, right? Maybe. Reading Bill Hicks quotes might be a far better idea than to persist with my rambling: “Today a young man on acid realized that all matter is merely energy condensed to a slow vibration, that we are all one consciousness experiencing itself subjectively, there is no such thing as death, life is only a dream, and we are the imagination of ourselves. Here's Tom with the Weather.”

I don't have children. Some close friends do. I do not know what path to follow or whether to commit to such a leap, who really knows anyway? And so, to celebrate the joy of those who I love, those who committed to go forth and create these darling little people, I wrote this song for them and their beautiful babes in arms. It celebrates the fear and exhilaration, the era-defining change in their lives and in mine as a longtime friend observing from the sidelines. That aspect of my life still remains unresolved; hey, who knows? I do see, however, that the LOVE that unfolds is magnificent.

A chorus very much dedicated to fatherhood and to Evie Ford. The verse doesn't necessarily connect with the choruses. They sit beside each other, they work, but lyrically they might be two stories, I think. I haven't decided really. It's a story of one voice coaxing a character to commit to love, I think. Still trying to work it out. Narcissus, he's the lonely selfish guy; maybe the same fella in Anola, now I come to think of it. He's really got to smarten up his act, whoever he is.

KIN is out now via Red Essential. Read the 8/10 DiS review of the record here, and more information about the band, and tour dates, can be found here