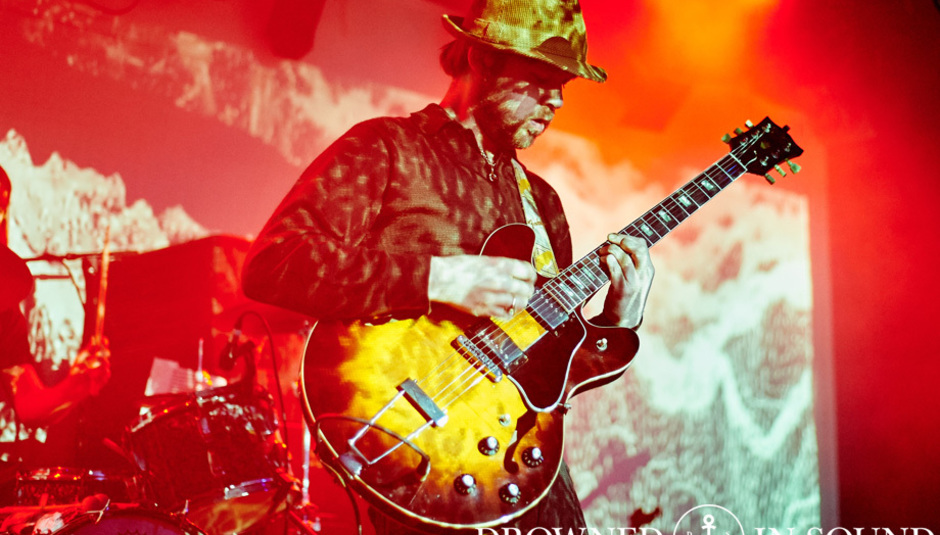 This time last week, DiS was one of the fortunate ones to witness The Coral's return to live action in the intimate confines of Nottingham's Rescue Rooms. Having spent the past two weeks touring around the UK, the band's short sojourn comes to an end tonight at London's O2 Forum. Thoroughly revitalised and at the top of their game both in the flesh and on record, the band's eighth album Distance Inbetween represents possibly their finest collection in over a decade. As well as documenting their full circle transition into a heavy psychedelic rock band. Released to a fanfare of critical acclaim earlier this month including a handsome 7/10 review on these very pages, Distance Inbetween documents something of a seachange from both a songwriting and arrangement perspective.

In an exclusive piece for Drowned In Sound, singer, guitarist and songwriter in chief James Skelly gives us a track-by-track rundown of the album. Take it away James...

I had the riff and the opening lines for this one, then I asked Nick (Power) to text me some words and phrases like the poems he writes for his books. I took words like "slide machine" and "vision", then wrote the rest of the verses around that. The overall meaning is about accepting personal responsibility. I played it to the band and the first thing everyone played stayed as their parts, it was sounding good but when Nick came up with the mellotron solo it took it to another level.

Ian (Skelly) and I were in my house and I was strumming a D chord on the guitar, saying we should write a song over one chord and he started singing “Here comes the white bird on it's long way down”. So I answered “There goes the feeling as it hits the ground”, then we wrote a couple more verses and left it there. We started jamming it in rehearsal the next day and then Nick and I finished the lyrics at his. We did it live in one take in the studio, then Ian said “We should get Paul Molloy on guitar for this”, they have a band together called Serpent Power. At the time I was the only guitarist, but when he started playing over the tune in the studio he was playing tuned down, distorted, drone stuff and we thought… He gets this, let’s get him in.

Chasing The Tail Of A Dream

I woke up one morning, went downstairs, got my guitar, took it back to bed and just started playing the riff. It was the first time I'd written over a riff that wasn't just a blues riff. In my head the lyrics are like some psychic detective in a film noir, but they’re also pretty personal. We recorded the track and then Ian re-recorded the drums over the bass and guitar. Also, it’s my first ever proper guitar solo, so I thought, may as well make it a big one (Laughs).

This is the oldest song on the album. We messed around with it on Butterfly House, but could never get the right arrangement. Molloy’s guitar solo is one of my favourite parts on a Coral track. Ian had this idea of the track sounding like a psychedelic BB King.

We recorded a version of this with John Leckie after Butterfly House that was more acoustic. For this version though, we wanted it to sound like Hawkwind jamming with The Byrds. The jam at the end was spontaneous in the studio and then we edited it in on the end. It's about being in a gang and feeling like you’re out on your own and no one can touch you. When you’re a gang you have your own language.

This was another track we did with Leckie, but then rearranged in the style of this album. When we came to do the vocals they weren’t doing it for anyone, so we rewrote the song over the backing track. It turned out really well and the label thought it should be the first single. The lyrics are about chance; Do we make our own luck? Or is it fate?

This could be my favourite song on the album. It reminds me of Frank Frazetta's artwork. I think the opening line grabs you right away. Paul (Duffy) put his bass through a small stone on this and it's got a great sound to it.

This could have been the new James Bond theme (laughs). Nick sent me the keyboard instrumental with a synth line playing the melody. We wrote the lyrics in his house, he was singing “Its you", and I added “That I’m turning into”, to give it another twist to the meaning. When we arranged it we were trying to give it a soundtrack feel.

I had this Cream-style riff knocking around for ages, but we hadn't quite sorted it in time for the studio. I'd written it off to be honest, but Ian saw the potential in it and rearranged the song. So Nick and I rewrote the lyrics and it turned out to be some kind of twisted pop song - that’s what The Coral are known for I suppose. The lyrics are about an awakening to an inconvenient truth, but there's euphoria in knowing where you stand.

She Runs The River

Paul Molloy and I worked on acoustic parts in different tunings for a week for this tune and when we got into rehearsal Nick started playing it on an old Lowery organ we've got. It sounded a lot more "Coral", so Ian recorded it on his Tascam 8-track and that’s what we built the track on. Alfie Skelly from The Sundowners played the bow on it, Molloy played some slide guitar and Paul Duffy played Moog bass.

We played this one live a few times on the last Butterfly House tour. It's about how fear is used as a tool and pushed in your face everyday, but refusing to give in to it. Once you let fear in it’s like the devil, it starts to whisper to you and you can't negotiate with fear so you have to shut it out. It's also the title of one of our favourite Hellblazer comics. The drum track is a loop of Ian sound checking his drums. It had such a cool feel we slowed it down on tape and the rest of the band played live over that.

Nick sent me this as a song, but I suggested it would be better as an instrumental outro for a film. When we first recorded it, it was really big sounding, but Ian said it sounded like Goose’s death scene in Top Gun (laughs). So we spent all day fucking it up on a WEM Copicat and a space echo until it sounded like the end credits from an old kung fu film. At one point there was a spoon involved.

The album Distance Inbetween is out now on Ignition Records.

For more information on The Coral visit their official website.