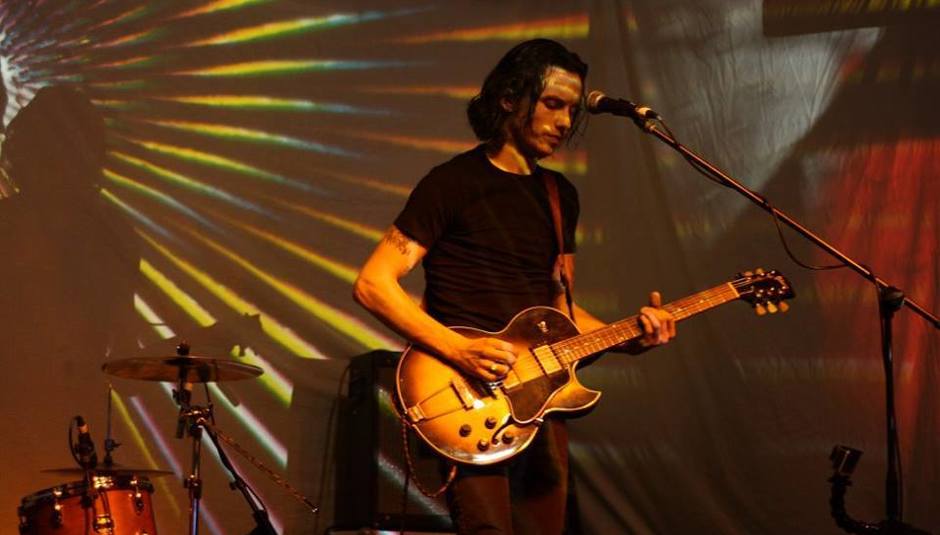 Go on, admit it. You're bored to the back teeth of bands now claiming to be "psych" that five years ago would have been mimicking Doherty and Barat harmonies while studying Silent Alarm note for note. Or worse still, swaggering around like mini-me versions of Liam Gallagher. Which is were DIY promoters like Astral Elevator prove their worth in separating the wheat from the chancers. Despite only putting on her first show in February of last year, Astral Elevator (aka Leanne Crowley) has already established herself as one of the psych scene's most reliable and refreshing promoters, and tonight's stellar line-up proved to be no exception.

This time last year, Nottingham instrumental trio Sunset Nebula were little more than a practice space pipedream. Three friends whose previous bands had disbanded jamming out ideas. So it's incredible to think that even now they've barely reached double figures in terms of live shows, yet are steadily carving out a reputation as one of the most exciting new acts on the psych scene. While titles like 'Cosmic Waiting Room' and 'Heavenly Rosa' might look and sound the part, all Zeppelin riffs here and UFO Club Pink Floyd wig out passages there, it's when the "outside influences" kick in that Sunset Nebula come into their own. 'Shadows' builds momentum via a relentless rhythm section that steadies then drives the song's heart before Tommy Jones skyscraping guitar takes it to the moon and back. As does the euphoric 'Oceans', where the missing link between Led Zeppelin's bombast and Explosions In The Sky's ethereal beauty is found. Afterwards the band admit one of the reasons they hadn't played so many live shows was because they spent a lot of their formative months searching for a vocalist. However, with a sound so dynamic and effortlessly executed as theirs, the old adage "less is more" springs to mind, as there really is nothing a singer could add to something so desolately wonderful. Ones to watch over the coming months for sure.

Last month, DiS had the pleasure of witnessing Desert Mountain Tribe own Gronigen's Eurosonic Noorderslag festival and here, back on more familiar turf (this is their third show for Astral Elevator in the space of twelve months) they're nothing short of a revelation. Playing a set largely culled from next month's long awaited debut Either That Or The Moon, which finally gets a release next month. What's evident from the outset is Desert Mountain Tribe don't do filler. Sure, there's certain reference points throughout the set that stand out. Guitarist-cum-singer Jonty Ball's vocal style occasionally reminiscent of Jim Morrison, while the pulsating backbeat provided by brothers Philipp (bass) and Felix (drums) Jahn takes on a similar vein to the driving force Alex Maas and Stephanie Bailey provide to The Black Angels. More importantly, there's an ambition and grandiosity to each and every one of their songs that stretches far beyond the back room of a provincial boozer (no disrespect to Gullivers). The likes of opener 'Feel The Light' or midset anthem 'Runway' were clearly designed to be heard in arena sized venues and one wouldn't bet against such an occurrence in the none too distant future. While in epic nine-and-a-half minutes long closer 'Interstellar', they possess one of the most powerfully engaging pieces of music these ears have been accustomed to in a long time. Structurally similar to Chris Isaak's 'Wicked Game' if hijacked and taken over by sonic terrorists intent on channeling the spirit of Black Sabbath and The Verve. Simultaneously. While it's still only early days in their fledgling career, there's only direction Desert Mountain Tribe are heading and that's upwardly.

On another night, any band asked to follow Desert Mountain Tribe's flawless performance would have simply given up the ghost and headed for the exit. Not Throw Down Bones. Instead, this pair of Italian noise merchants managed to create a terrifying wave of sonic nihilism culminating in a broken PA that curtailed their set somewhat towards the end. Emerging from the embers of gone but definitely not forgotten psychedelic noiseniks Thee Piatcions, the duo - Dave Cocks (bass/percussion) and Frankie Frankie (guitars/electronics) - weld a vicious concoction of beat-infused white noise that comes on like a brutally intense distant relative of The Soft Moon or HEALTH. As the beats get faster the guitars get louder and vice versa. Indeed there is no real let-up apart from the aforementioned PA malfunction which doesn't really detract from what's happening onstage. If anything, it provides a brief respite for the senses after the relentless bashing they've taken. Not to mention the damage to various pieces of equipment on stage too. Once parity is restored, more sonic belligerence ensues before time is finally called.

As psych rock and its various offshoots continue to blossom, it's good to know some of those flowers are blooming in their own, inimitable way. And more importantly, the scene is much healthier for it. 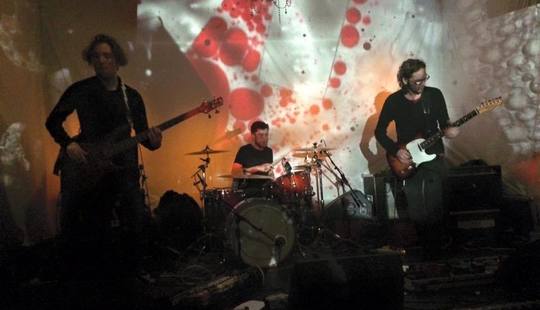 In Photos: Massive Attack @ Brixton A...