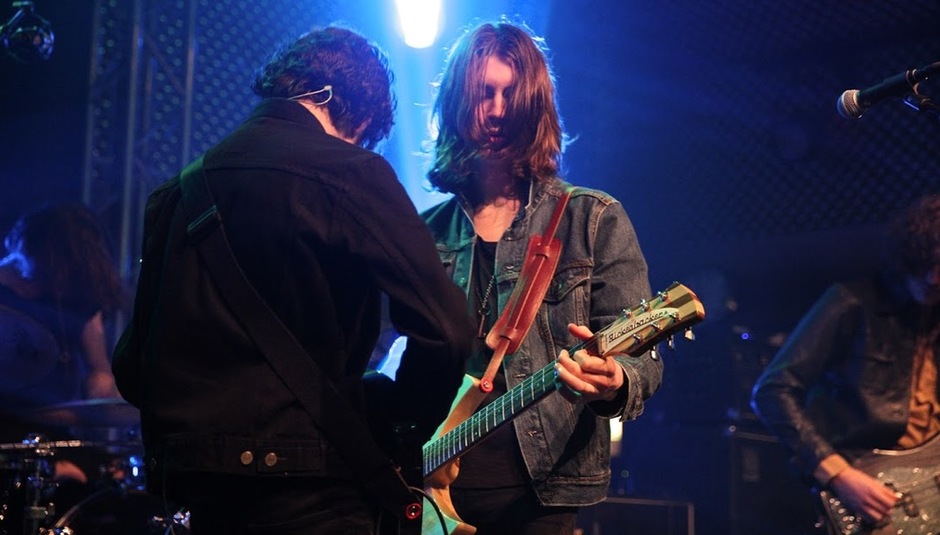 20 things we learned at Eurosonic Noorderslag

20 things we learned at Eurosonic Noorderslag

Last week, DiS spent four days at Eurosonic Noorderslag. Situated in the Dutch city of Groningen, Eurosonic has established itself as arguably the biggest festival of its kind for breaking new artists into the international music scene. From Wednesday 13th through to Saturday 16th January, nearly 400 acts played a variety of showcase events alongside numerous conferences, workshops and award ceremonies. So without further ado, here's 20 things DiS learned from this year's Eurosonic Noorderslag.

1. Groningen is such a vibrant city

Although situated a good two-and-a-half hours from Amsterdam by train, Groningen is no less vibrant than the Netherlands capital city. Boasting a population of around 200,000, it's a constantly buzzing hive of activity that literally doesn't stop for breath never mind sleep the whole time we're there. Of its inhabitants, approximately one fifth of those are students, and every night is Saturday night. Groningen also boasts the most live music venues per square metre in the Netherlands. What more could you possibly want?

Needless to say, despite the 5am curfew that exists, many of the bars in and around the city's main cultural hub don't close until either A) the last person leaves; or B) the bar is drunk dry. Both examples are witnessed over the course of the four days. Needless to say DiS pleads not guilty to either charge!

The hub of the festival and site of all the daytime conferencing events. By night, De Oosterpoort became a multi-roomed, multi-floored concert venue with numerous bars and food courts (try the delicious satay chicken salad if you get chance) adorning its premises. Sited only five minutes from Groningen central station and within easy walking distance of every venue in the city, it acted as an ideal meeting place over the whole four days while offering so much more besides.

For the first three days (aka Eurosonic) at any rate. Most of Europe's premier booking agencies were represented here and while not quite as industry-centric as The Great Escape or South-By-Southwest, pretty much every person DiS encounters is wearing a guest pass of some sort.

On arrival at Groningen Station, I asked the taxi driver if he could take me to the Ship Hotel. "The Ship Hotel?" he asked. "I don't know it." So I gave him the address and postcode and he despatched me to a boat. An actual boat. Yet after the initial culture shock the Hotel Ship Ruby will go down as possibly the most homely, comfortable festival accommodation I've experienced in years.

6. The David Bowie Is... exhibition is simply stunning

While a visit to the David Bowie Is... exhibition at the Groninger Museum was always on the cards anyway, his passing last Monday brought an air of poignancy to what is largely a celebration of his life and work. Not to mention a surge of interest. Nevertheless, with tickets booked in advance for Thursday morning, two breathtaking hours were spent perusing over some of the most sought after artifacts in rock. From original handwritten lyrics to many of the costumes he wore on stage alongside interactive sonic and visual treats galore, it really is one of the most fascinating exhibitions of art and memorabilia DiS has ever observed.

If someone had told me last week I'd be singing the praises of a former winner of The X Factor I would probably have laughed at them. Or worse. Nevertheless, having won the Danish version of the show in 2008, Martin Hedegaard's reinvention as Saveus is a joy to behold. Playing to a jam-packed Grand Theatre on the first (Wednesday) evening, his uplifting and occasionally grandiose take on the sphere known as pop music is reminiscent of George Michael fronting Rudimental. By the end of the set, there isn't a still body in the room while everyone around is proclaiming him the new voice of pop. Definitely one to watch out for.

But if one band really stole the weekend, it was this homegrown quintet. Essentially the brainchild of singer, guitarist and songwriter Annelotte de Graaf, Amber Arcades recently signed to Heavenly and it's easy to see why the UK label chose them to add to their already impressive roster. Having played a mammoth ten shows here of which DiS caught two, their repertoire veers from lo-fi folk pop in a similar vein to Caera Obscura or Alvvays to expansive dreampop with a krautrock twist that's part-Stereolab, part-The xx. The likes of 'I Will Follow' and 'Come With Me' had DiS nodding its head profusely from the outset while closing number 'Turning Light' brought the house down both in De Spieghel on Friday and De Oosterpoort twenty-four hours later. Destined to be ours and your new favourite band.

Literally. And judging by the queues outside it seems Eurosonic can't get enough of them. So when Bristolians The Jacques overcome early nerves on what is their first gig with a new guitarist and bass player to send the Huize Maas into a frenzy, and Stockport's Blossoms semi-justify the hype with some timely between song banter and gargantuan closer 'Blow', which scrapes the skies in a pre Urban Hymns Verve kind of way.

When surrounded by agents, promoters and bookers for the best part of four days it's inevitable conversations will turn to this summer's festivals. Which they do almost immediately. And while DiS is sworn to secrecy, it's fair to say some of the names mentioned as being already booked for certain events had the mouth frothing on several occasions.

11. Ribhouse Bronco do the best burgers in town

Vegetarians look away now. If you like Argentinian steaks, unlimited racks of ribs, two pint beer glasses and some of the most ridiculously oversized homemade burgers in town, Ribhouse Bronco on the Grotemarkt is the place to be.

Although not exactly a surprise, the nation that's already brought Sigur Ros, Dead Skeletons Bjork and The Sugarcubes to the world delivered a host of impressive artists at Eurosonic too. Silly names aside, When 'Airy Met Fairy's orchestral chamber pop and Pink Street Boys no nonsense garage punk stole the show, while Axel Flovent's acoustic melancholia will break thousands of swooning hearts across Europe this year.

While the aforementioned Saveus flies the flag unashamedly in the name of pop, some of his fellow countrymen thrilled the Eurosonic masses too. Psychedelic rockers De Underjordiske wowed Vera on Thursday evening to their wild concoction of Brian Jonestown and Black Sabbath while left field eccentrics Lowly demonstrated with purposeful ease why Bella Union have taken a punt on their wares. Elsewhere, Aarhus outfit Liss were the talk of many afterhours bars thanks to their 80s tinged electro pop that recalls Fine Young Cannibals and The Thompson Twins (seriously!) while Liima's experimental excursions fused ambience with danceable rhythms to the satisfaction of all present.

London-based trio Desert Mountain Tribe have been a regular feature on the psych rock scene for a while now. However, if their dramatic, showstopping set in De Spieghel on Friday evening is anything to go by, they bare all the hallmarks of a band destined for bigger things way beyond the constraints of a scene or niche market. While echoes of The Black Angels and Spacemen 3 emanate from their every pore, songs like 'Interstellar' and 'Coming Down' were borne to enrapture thousands of people in arena sized halls.

If playing their first gig with a newly acquired (and nameless) bass player this evening wasn't daunting enough, looking out and seeing the Huis De Beurs would have been the icing on the cake before stagefright set in. Not for Fews. Rising to the occasion, the Stockholm based four-piece played an exemplary set of sonically charged post-punk that's equal parts Interpol, Diiv, The Walkmen and A Place To Bury Strangers. Numbers like '10 Things' and 'The Zoo' are anthems for the disaffected in waiting, and while still relative newcomers as far as live performances are concerned, grasp the nettle and take everything in their stride. To the point where audience members are queuing for vinyls and mementos long after the band have left the stage.

If Eurosonic covers the first three, industry-led days, then Saturday belongs to Noorderslag. Taking place in De Oosterpoort from late afternoon until the early hours of Sunday morning. Noorderslag showcases a host of Dutch musical talent from a wide spectrum of styles and genres. While it would be fair to say the majority of music industry delegates have left Groningen by this point, the predominantly Dutch audience are among the most supportive DiS has witnessed. Turning out in enthusiastic droves to see the likes of Amber Arcades (yes, them again!), prog rockers My Baby and nu pop sensations Causes among others. We're especially taken aback by Pauw, who fuse the expansive musings of Mew or Tame Impala with primitive folk and close their set with a grandiose, reverb-heavy instrumental of 'Space Oddity' in tribute to David Bowie.

17. Vismarkt is the epicentre of everything

If in doubt, head for Vismarkt (aka the fishmarket)! Most of DiS' favourite venues are situated on or around the market square, from the aforementioned Huize Maas and Huis De Beurs to barbecue-cum-bar Zomers and cocktail haven Newscafe.

18. Everyone is so friendly

It goes without saying that Dutch people are among some of the most hospitable, welcoming and genuinely heartwarming you're ever likely to encounter. Every person DiS meets is refreshingly charming and helpful, particularly on the first evening as directions are sought uncovering bearings. There's no animosity, no intimidating stares, no awkward silences or indeed any kind of discomfort shown whatsoever. To the point where DiS could get quite accustomed to these surroundings on a long term basis.

19. The Germans from Belgium

No, that's not a misprint or typo error. The Germans really do come from Belgium. Ghent to be precise. And they're quite possibly the most bizarre live band I've ever laid eyes on. Comprising five members in total, among them a singer adorned in a wizard's outfit who's a doppelganger for Wayne Sleep and a gyrating dancer who removes not one but two pairs of pants during their set before making out with his band's guitarist midway through the final song. What do they sound like? Somewhere between Sonic Youth and Can. Which to these ears actually ain't too bad.

See points 1-19 in no particular order.

All the nightmares came that day, my ...