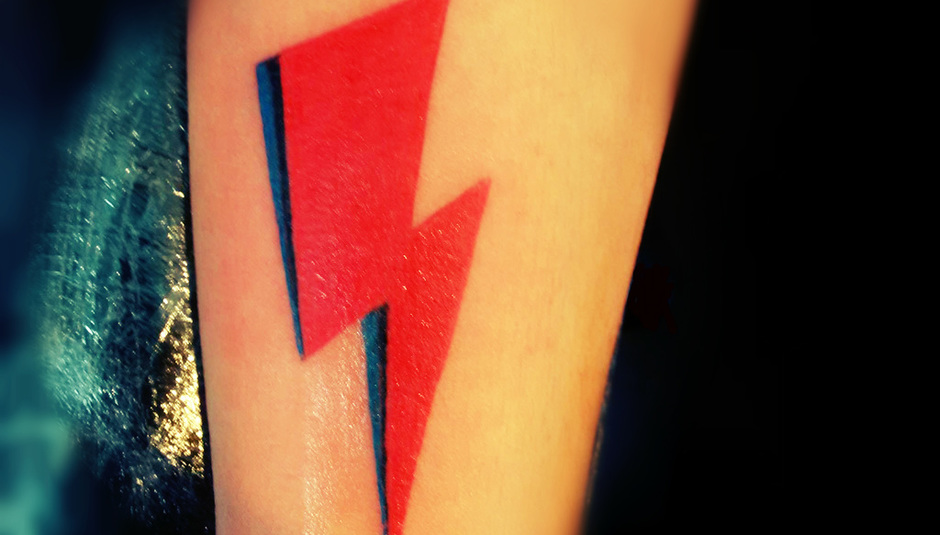 All the nightmares came that day, my David Bowie tattoo's here to stay

All the nightmares came that day, my David Bowie tattoo's here to stay

Like many, many others on that awful Monday morning when the news broke, slowly, haltingly, to furious refutations and refusals-to-believe across the social mediasphere, my initial reaction to David Bowie's death was a kind of stunned, incredulous disbelief.

It began to sink in. I cried, alone at my laptop screen and then again when putting it into words made it seem more real, when waking my husband to share the news. I loaded my iPod with every scrap of his music I’d collected in the digital years, reached the office, dazed, bashed out a short obituary/tribute for the local newspaper where I work, returned home still in a fug of grief at the end of the day to spend the evening weeping at the news, and then... waited to start to feel better.

By the middle of the week my shuffled soundtrack was coming to an end and I still felt bereft. An unguarded consolatory comment from a colleague would set me off, scrolling down my facebook and twitter feeds, almost entirely populated with his face, THAT face, in all its multiplicity, all its blazing radiance would set me off, certain tracks (Starman, Absolute Beginners, Quicksand, Where Are We Now) would slay me all over again.

This was weird. This was deep, and painful, and… real.

So it felt like it needed something else painful, something that almost literally ‘cut through’ the sadness, something dramatic, like the Dame himself, to mark what the man and his music had meant to me.

What had he meant?

I’m 47, and was first introduced to David Bowie by a friend when I was 14. At the time, I was in thrall to, and in awe of, a bunch of slightly older, seemingly vastly cooler boys who I’d slow-dance with and sob in the toilets over at sports club discos in my small suburban Home Counties village. Boys with a sense of style. Boys that were louche. Boys that wore make-up that made my dad red-faced with disgust when I brought them home. Boys that, it turned out, were themselves in thrall to David Bowie – the lodestar for the 1980s New Romantic. Of course, their heroes quickly became my hero and my passion for his music (‘my’ holy trinity of which remains Hunky Dory, Ziggy Stardust, Aladdin Sane) outlived any small passion teenage me might have felt for any of them.

What remained was a lifelong adoration of a kind of cleverness-meets-homespun-glamour, a very British, very suburban sense that you could turn yourself into something magnificent with a fabulous home-made outfit and a rifle through the make-up aisles. The belief that sexiness wasn’t something expensive and American and glossy and perfect – that it was found in oddness, unconventionality, the slightly “off” appearance, or in a confused or confusing sexuality.

And leaving the glorious music aside (and oh, what glorious music – but so many others have so beautifully written so many words about the music in the last week) WHAT an amazing thing that was to bestow on a young-for-her-age, naïve, shy, tomboyish 14 year old.

So sitting in the chair at Fabio’s tattoo parlour last Saturday, talking about David Bowie and brandishing an explanatory printed picture of the Aladdin Sane lightning bolt in my hand as the needles hit the flesh of my inner arm, the connection between that young kid, the much older - if not much wiser - woman I am today and the focus of my thoughts for the last week (year, decade, thirty+ years…) all came together in a feeling of RIGHTness.

I’m still sad now. I listened to Hunky Dory side one on Sunday and blubbed like a fool again, but in some weird way cutting, piercing, inking and bruising my skin has seemed to start a kind of healing process. I look down at the orange and blue flash on my arm and catch myself smiling. Remembering. Thinking about Bowie, thinking about my youth, thinking about the friends that I bonded with in later teenage years who I shared a sensibility and passion for music with, many of whom texted, messaged or emailed me last Monday to share their sadness at the news.

So thank you David. I’ll never forget you. You brought so much beauty into my life and my tattoo is just the last in a long line of beautiful things that I can attribute directly to your influence and your role in my life.

Related read: Sorrow, or: why it's okay to be upset at David Bowie's death

20 things we learned at Eurosonic Noo...