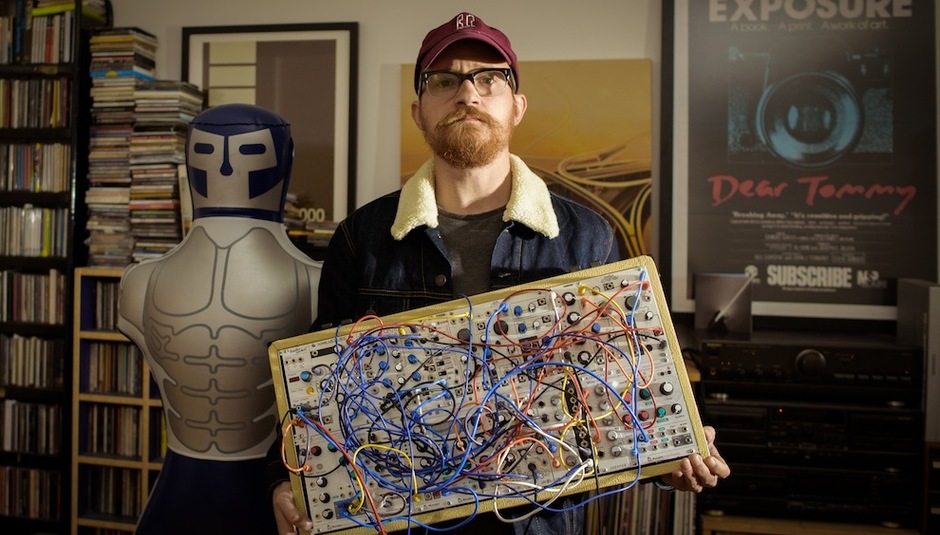 In our semi-regular nose around the equipment that some of our favourite bands use, Planet Gear, Teeth Of The Sea talk us through their sonic arsenal...

As someone with no discernible musical talent whatsoever I'm always on the look out for bits of kit that will make the gap between thought and expression that bit more bridgeable. I'm also someone who, when confronted with any piece of technology more advanced than a pencil sharpener, starts gibbering in panic like the monkeys faced with the monolith in 2001. Therefore I am the target audience for the Volca Beats. You would have to be an actual medically defined imbecile in order to not be able to get some satisfying bangs and thwaks out of this badman, and when you start hooking it up to effects pedals then the real fun begins. It has it's problems - it's too damn quiet for a start - but it's great to use as a sketch pad for ideas and brilliant to piss about with when you're caned as well. 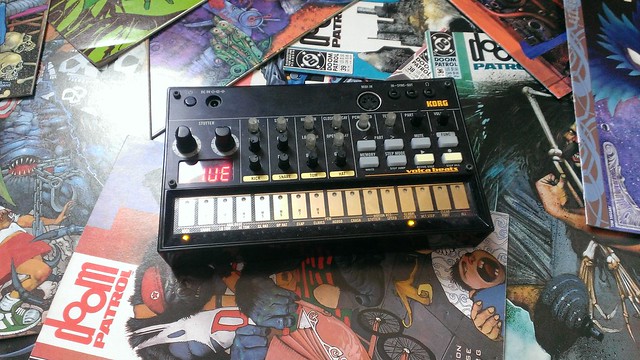 For years as a callow youth, either out of some kind of inverted snobbery, simple laziness, or perhaps through being perpetually skint, I would tend to simply play anything I could lay my hands on, reasoning that the music was more important than the medium. Yet it’s for that reason that I have to thank Darren Lucas, the assistant manager at the HMV I worked at back in 1998 for this guitar of his own teenage metal years that he ‘lent’ me back then, which to this day I haven’t given him the token fee I initially promised him, but which has been responsible for 90% of the guitar parts on all four Teeth Of The Sea albums.

I’ve taken a fair amount of flak for using this guitar, generally from people who can’t understand why someone would play a garish instrument like this ‘unironically’, but this is about more than living out Michael Schenker fantasies. It’s beefier than the Strat sound I was previously used to, yet cuts through with vicious treble more than a Les Paul tone. Moreover, it plays like a dream. So Darren, if you’re listening - unlikely I know - I still owe you fifty quid. 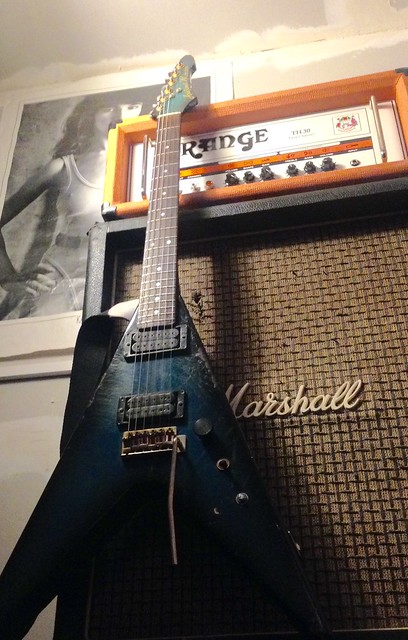 As firm adherents to the Cabaret Voltaire maxim of "No Sound Shall Go Untreated", TOTS' natural instinct is to make live instruments sound more like machines/monsters/amphibious landing craft rather than aim for anything 'organic'. No surprise then to find out that such sonic detournement is assisted by a frankly stupid amount of effects pedals. Being a horn player there aren’t a lot of purpose-built units that I know of, so for the first three albums I was just using guitar/loop pedals. For this album I wanted to expand the palette and get some really batshit sounds going, so I invested in this beast.

First thing you have to mention is how hideous it is to look at, like it's made entirely from empty Tennents Super cans and old tyres. I gather if you use it as an actual vocal pedal then it's pretty hideous sounding too, but as a trumpet pedal it was invaluable whilst recording HDBT and crops up on every track in some form. There are one or two thickened/compressed/mildly detuned settings that work brilliantly for the more straight melodic stuff like ‘All My Venom’. The real fun though comes with naff joke sounds that have stupid names like 'Cyborg', 'Wizard' and 'Eric Pickles' - these work really well as textures within loops, giving them an out-of-order quality I've previously lacked.

There's loads of other stuff on there too, from a fifth harmoniser to a pitch shifter that you can do cool dropped octave stuff on, and you can also customise your own sounds with a bunch of different parameter settings and the expression pedal. So, a pretty hideous, unfashionable pedal that makes a brilliant racket - pure TOTS. 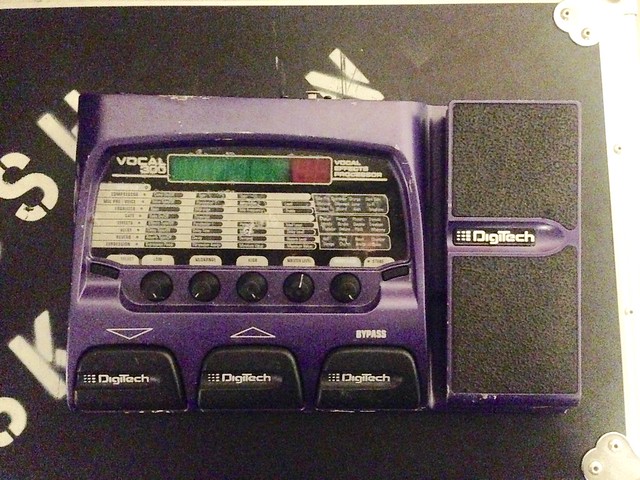 This setup started life as a Makenoise shared system, and has rapidly grown to consume another case and all my money. Joining Makenoise is gear made by Mutable Instruments, Intellijel, Doepfer (LOVE that Wasp filter), ALM, Noise Engineering and Pittsburgh Modular.

It’s all over Highly Deadly Black Tarantula in various forms - ‘Have You Ever Held A Bird Of Prey’ makes great use of the Basimilus Iteritas for bass synth and percussive noises whilst Braids generated the bass drones and squeals for Animal Manservant. Any Eurorack heads out there won’t have too much difficulty guessing what was used on the track Phonogene.

Unfortunately I’ve yet to use it in our live set up as I’m not sure the audience would appreciate waiting 10 minutes between tracks as I re-patch it. Plus I’m lazy and it’s far easier to just loop it and play it back through Ableton. Anything for a quiet life. 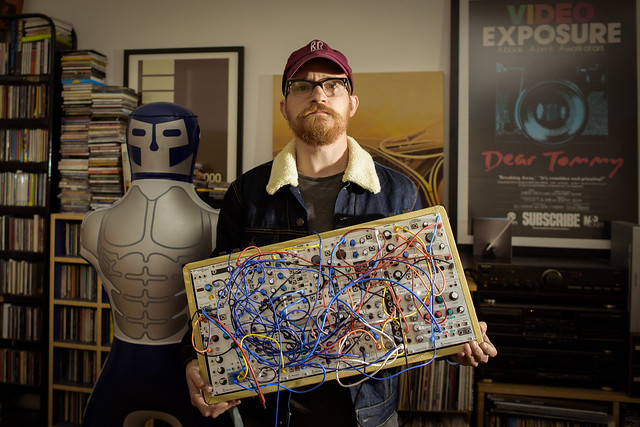 Everyone needs one of these. Everyone. Invaluable for recording those musical brain farts that come in the wee small hours that will eventually transmogrify into sweating and snorting rock monsters, as well as for playing about with on stage when the aforementioned effects pedals come out, this little beaut has significantly improved the quality of my life for the better, and I'm here to wish the same improvements on YOU. The sound quality is almost unsettlingly clear and the directional mics mean that you can easily record everything from outdoors ambience to full-tilt band rehearsals with no problems at all. The fact that TotS are a band who write new material after hours of sifting through rehearsal room improvisation sessions means that this beaut was invaluable when it came to piecing together the songs that would eventually become Highly Deadly Black Tarantula, and it also provided a few moments of ghastly ambience on the album itself. This is probably the right place to mention that thanks to this miracle machine an uncredited and unwitting guest on the album is none other than the silver haired modmaster himself, Paul Weller. Cheers, Paul Weller! And thank you, Tascam DR-40. 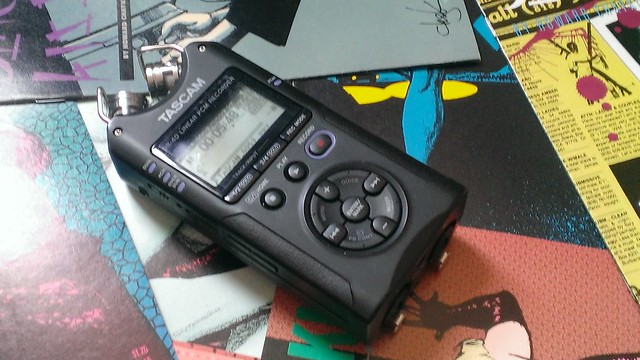 Anyone who knows classic Miles Davis recordings like Sketches Of Spain or his soundtrack to Ascenseur Pour L'echafaud will know this sound, a tone so sexy and cool it can make children take up smoking within ten seconds of hearing it. It's something that's quite hard to use live due to the massive drop in volume involved - tricky to juggle with TOTS’ phenomenal, incessant live volume. Nevertheless it was a real pleasure to use it on the recording and hopefully gives the opening motif of ‘All My Venom’ an existential, filterless-Gauloises-infused flavour that only the Harmon can bring. A sound that makes you want to pound the mean streets looking for weak men and strong dames. 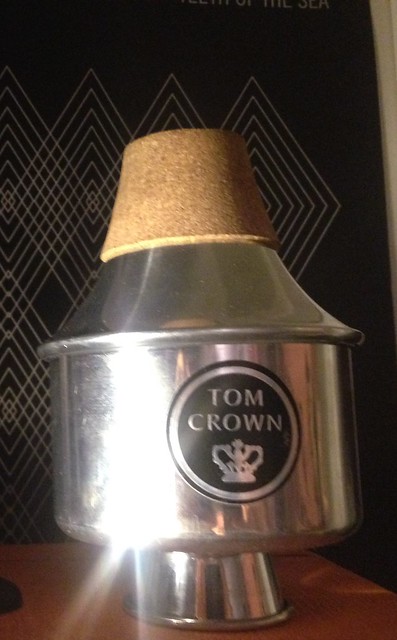 I’ve inherited a fair amount of gear from other people over the years too - an unreliable but beautiful sounding Roland Juno-60 used to belong to the talented and mercurial Daniel Patrick Quinn, who sold it to me for (again) fifty quid when he quit music to travel to Indonesia. A Marshall 4x12 I use still has the name of grebo no-hopers Under Neath What stencilled on its back. And this guitar synth was kindly donated to the TOTS cause by Mr Snips AKA Steve Parsons, a cosmically learned chap formerly of Baker Gurvitz Army and Sharks (alongside Chris Spedding and Free’s Andy Fraser) who bought it at some point in the late ‘80s.

Hideously impractical, off-puttingly counter-intuitive to play, and reliant largely on MIDI technology which I’m way too much of a neanderthal to figure out, it’s a monster I’m nonetheless determined to tame enough to actually use on a record at some point. Sadly though, I was thwarted during the Highly Deadly Black Tarantula sessions when we were alerted to a pungent smell of burning in the live room and it transpired that this retro-futurist totem had caught fire of its own volition. Just maybe there are mystical forces conspiring to stop me from ever using this thing, but I’ll keep battling ‘em against logic or reason. 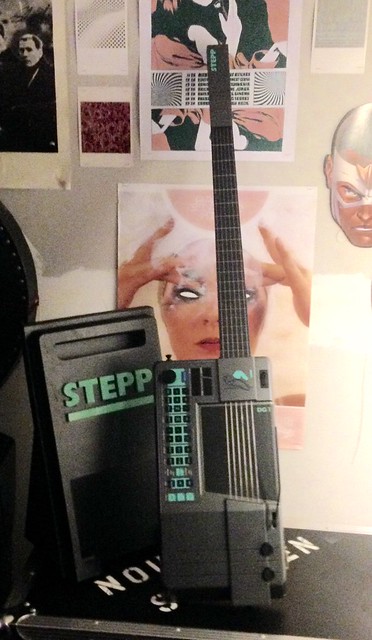 Phwoar, look at that little beauty! I picked up this gem at a branch of Tower Records in Shibuya, Tokyo a few years ago, having no real idea what it was or what it did but attracted by the garish and indecipherable graphics on the box. It came bundled with a magazine which featured what appeared to be a complete history of the synthesizer (all the text was in Japanese) with loads of glossy photos of ARP's and Moog 55's etc. Basically the synth equivalent of Razzle. It was also dirt cheap.

It's a little oscillator that features a bog standard (but great for squealing sweeps) filter, an LFO with square and sine wave, AND you can run external signals through it. Stick it through some pedals and it really starts to come into its own though, with things rapidly descending into a chaotic squall. Sure, the back is made of cardboard and the knobs fall off all the time, but when it's this much fun, who cares? In summary: 'Kin DECENT. 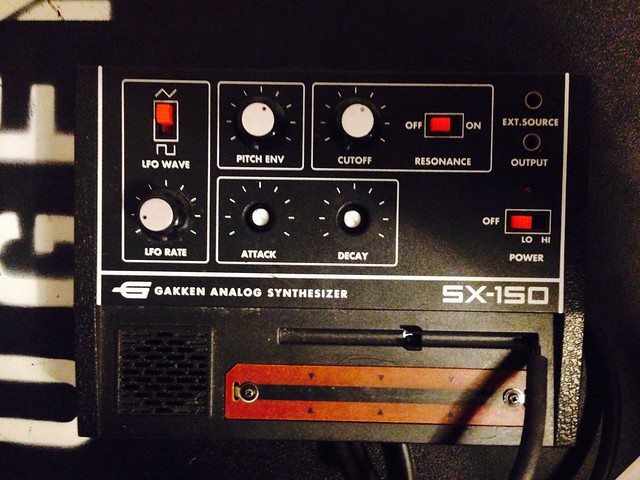 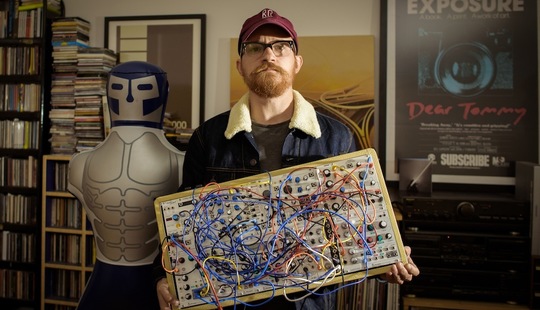