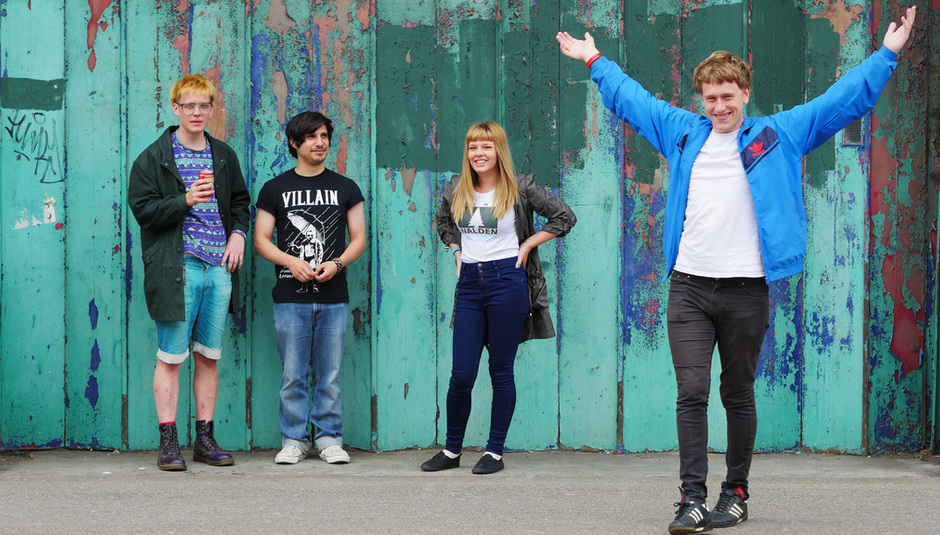 Ahead of the release of his new record, Seems Unfair, Ellis Jones aka Bristolian DIY musician Trust Fund talks exclusively to DiS about the album, track by track...

I guess this song is about trying really hard to make your life better and very consciously planning out how you can do that. It was always going to be the first song on the album, and I think that it marks a transition from the first album nicely, in that it starts quiet and kind of lo-fi, and then kicks into the sound which runs through the rest of this album. The songs on this album were written from about August 2014 to February 2015, so the period between finishing the first album and it being released.

I feel so ambiguous about football and especially the kind of football that you can watch on TV, but I basically can’t deny how important it is to a lot of the relationships I have with people. The overlapping vocals in the breakdown bits are very consciously trying to copy The Middle Ones, who do that all the time to much better effect.

I think this is the closest we have come to writing a Weezer song, and the verse melody in particular is quite long and winds around itself in the way that the Weezer ones that I like do. This song is kind of absurdly rocky. Compared to the last album this album is a lot heavier and the whole album is a lot more coherent in terms of arrangement and feel or whatever. I think the last one only had drums on half the songs, and they are on all the songs here.

This is a song about parents supporting us being in a band, and being willing to sacrifice stuff. I guess that is a predictable thing but it feels important to acknowledge. The first two lines are specifically about when Roxy’s mum drove us from Bristol to Nottingham so we could play at JT Soar. Again, writing songs that are love songs to friends and family is a thing that I have watched The Middle Ones do and thought about how good they are at doing it.

This is a song about how work is depressing but how there is usually not much you can do about it, and I think “seems unfair” maybe captures some of the apathy of that. Stefano’s guitar parts in the breakdown are amazing and I think it was Dan’s idea to speed up during that part to make the last chorus bit way more fun. I guess the song structures are more ambitious than the last album and this is a good example of that.

The chorus changes key to be a tone lower than the verse, which feels kind of like a songwriting trick or something, like The Muffs might do. I remember Stefano being impressed when I told him that, so that is why I am telling you now.

There is a lyric about “skating through the ‘free from’ to ‘world foods’” which I think is my favourite lyric on the album just cos it is very clumsy but also it captures how happy I feel when I am running around a supermarket at night. Supermarkets at night feel limitless. I think there are four mentions of supermarkets on the album. Stefano’s guitar bits in the second verses are so good. When he sent me that for the first time was when I felt the most excited about recording as a band and basically relying on other people to have really good ideas. It means ceding some control and that scared me a bit, but with Roxy, Stefano, and Dan, it never really felt like a risk because they are all so good at writing music both on their own and as part of a band.

This is a prog song or something, about being far away from someone and trying to look after them. It uses the patented Joanna Gruesome Chord multiple times, and then near the end it just sticks on it for about a minute. That’s my excuse for using it — we tried to do something different with it. This one is really fun to play live. It is a sequel to our previous song ‘Scared’ (which we can retrospectively title Scared: A New Hope) but is not really about any of the same things.

I think this is the first time I have ever consciously done clever guitar chords. In the verses, it’s basically a I-V-IV progression, but the bass note in the guitar descends chromatically. Me and Roxy did about ten vocal tracks on the chorus and I think they’re all in there, quietly. I wanted it to sound like Kirsty Maccoll. The lyrics are about private and public spaces. The last two songs on the album, this one and the next one, are by quite a long way the best songs we’ve recorded, I am pretty sure.

We recorded this album with MJ from Hookworms and I was adamant I would not let him get any organ on it, but finally here he won out. It’s going through a Copycat delay which we switched off just before the guitars kick in and that’s why it sounds like its winding down there. MJ has a bunch of clever tricks like that. The sound of the album is all down to him really, and working with him was fun and exciting and interesting and all the things I had hoped it would be.

Seems Unfair will be released on 30th October 2015 via Turnstile. Pick up a copy from Bandcamp or your local record store.

There’s A Riot Going On: The Wedding ...