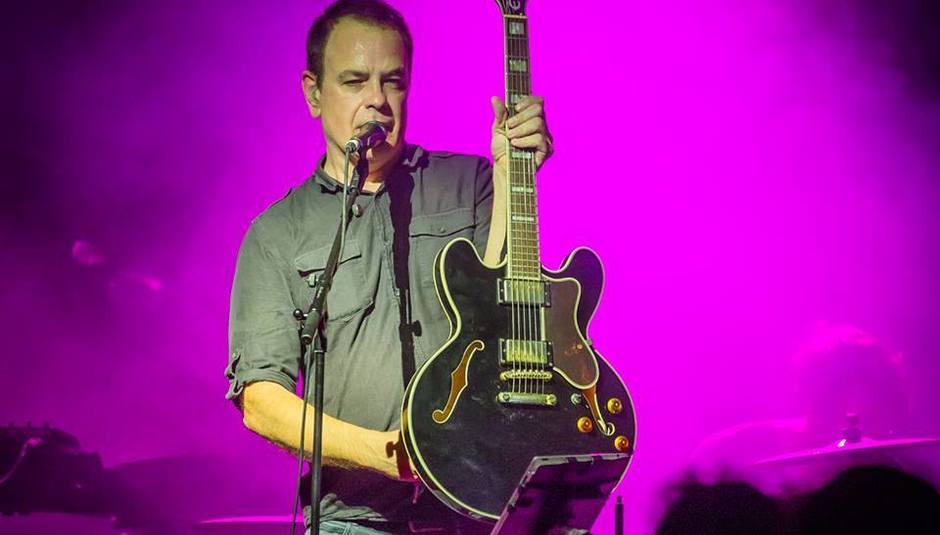 Whisper it quietly but retro is huge where live music is concerned. Looking back through my ticket stubs this year could almost read like a list of who was popular in 1990. Morrissey, Simple Minds, Ride, J Mascis, Swervedriver,James, The Darling Buds, The Fall, Jesus & Mary Chain, the list is endless. So it probably makes sense that promoters up and down the land have realised staging events purely aimed at the nostalgia market is a more financially viable option than similar ones involving new talent.

Take Wake Up!, the latest addition to an ever growing calendar. Celebrating the golden age of "indie" and named after a Boo Radleys (incidentally one of the few bands from that era who haven't reformed - yet) song to boot, its heady mix of the great, the good and the indifferent proved popular with both artists and punters if last weekend's shindig was anything to go by.

Hosted by Nottingham's Rock City, itself a long standing bastion of alternative music currently in the middle of its own 35th birthday celebrations. Wake Up! brought together a delectable assortment of acts with several million record sales between them. Indeed, it's probably fair to say at least two of these could - and regularly do - have sold the venue out in their own right.

Sadly, we're still in the queue when the first band of the day, The Amber Herd, take the stage. Nevertheless, we arrive just in time for The Sultans Of Ping, a band whose "FC" affixed to the rear of their name owes as much to their obsession with Nigel Clough and his (then) all conquering football team, Nottingham Forest. 'Give Him A Ball And A Yard Of Grass' is dedicated to the aforementioned while songs like 'Let's Go Shopping' and 'Stupid Kid' up the ante where comical indie punk rock is concerned. Finishing on "the hit" 'Where's Me Jumper?' (although it technically wasn't, barely scraping the nether regions of the Top 75), energetic frontman Niall O'Flaherty and his band of cohorts do enough to illicit the first moshpit of the day.

Local outfit Lorna, having formed themselves in the late nineties and put out their first record at the turn of the century cast off the veterans tag with winsome aplomb. With two thirds of their six song set taken from this year's excellent sixth long player London's Leaving Me, their Belle & Sebastian go shoegaze is a delight both visually and aurally.

Which is just as well because Brix And The Extricated are truly aw-Fall, if you'll pardon the pun. Self-proclaimed fashion expert she may be, but her bad karaoke versions of Fall classics render former hubby Mark E Smith's back catalogue an insufferable mess. Which we all know it isn't.

Fortunately, Mancunian indie collective The Woodentops are on hand to restore parity. Playing a short set encompassing three decades worth of recordings, early singles 'Good Thing' and 'Move Me' go down a storm. As does last year's 'Third Floor Rooftop High', which isn't so much a throwback to days of yore but more a shining example of a band still at the top of their creative game.

There's a buzz in the main room which unsurprisingly coincides with the arrival of David Gedge and The Wedding Present. Having spent the past few years touring various albums from the band's near flawless archives, it makes a refreshing change to hear an hour long "Best Of" set that truly justifies its descriptive. Opening with 'Everyone Thinks He Looks Daft' from debut long player George Best, it's clear to see why Gedge and co are still held in such high esteem today. 'Dalliance' roars past in a fury of sonic belligerence while 'Kennedy' brings back memories of teenage kicks and first kisses. Ending on one of his earliest compositions 'My Favourite Dress', Gedge is all smiles now and for the rest of the evening, posing for photos in the foyer long after the band have departed.

Thousand Yard Stare might have imploded suddenly first time around but they're making up for last time this evening. Playing only their third show in twenty-two years, it's hard to tell they've been away such is their vigour. Instrumental 'Junketing' gives way to a rousing 'Version Of Me', the band's final single from 1993 before early 45s 'Buttermouth' and 'No Score After Extra Time' turn Rock City's basement into a no holds barred frenzy of flailing limbs and sweaty bodies. Energetic vocalist Stephen Barnes introduces their top 40 hit 'Comeuppance' by lambasting Top Of The Pops for not inviting them on the show, while 'Wonderment' and 'Wideshire' create more excitement out front. With new material in the offing, expect to see more of Slough's finest musical exports in 2016.

Headliners Echo & The Bunnymen have also discovered a second wind if last weekend's Rockaway Beach set and tonight's performance here are anything to go by. Rolling back the years, Ian McCulloch looks the epitome of cool, dropping a quartet of staples from debut album Crocodiles from the outset. 'Constantinople' off last year's Meteorites soars spectacularly, sandwiched in between their now customary cover of The Doors' 'People Are Strange' and 'All My Colours' off 1981's breakthrough album Heaven Up Here. With the audience lodged firmly in the palms of his hands, McCulloch delivers an impeccable run through a selection of the band's best known singles including 'Bring On The Dancing Horses', 'The Killing Moon' and 'The Cutter'. As 'Nothing Lasts Forever' and an elongated 'Lips Like Sugar' featuring verses from Lou Reed's 'Walk On The Wild Side' and Wilson Pickett's 'In The Midnight Hour' bring the evening to a close, it's fair to say the first Wake Up! all dayer has been a resounding success.

Songs and Collaborations: Ben Watt me...

There’s A Riot Going On: The Wedding ...