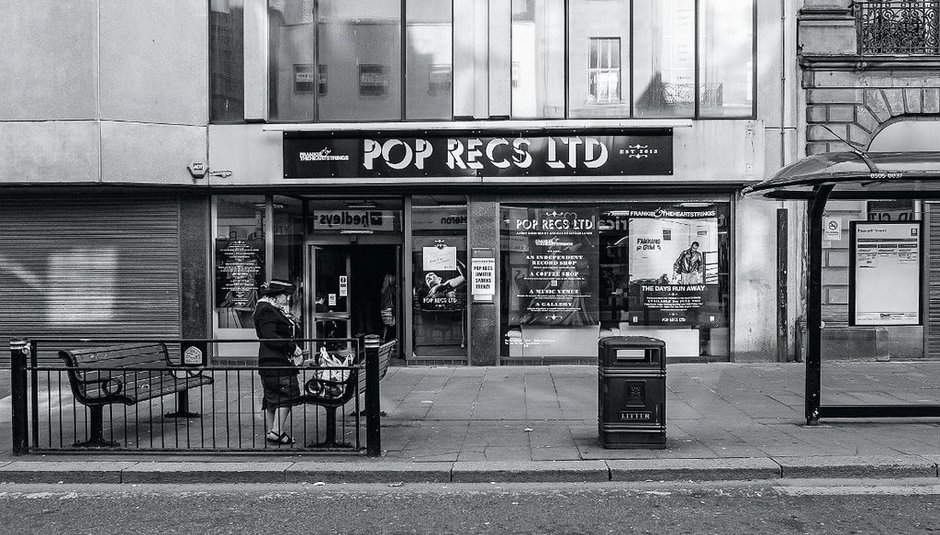 Dave Harper from Frankie and The Heartstrings on resurrecting their record store in Sunderland.

Pop Recs was not my idea. It was an idea our manager had to promote our (Frankie & The Heartstrings) second long playing record (which was a huge hit. Nowhere.) So, before you start building fantasy castles of thought it is important to establish that Pop Recs started as a tool looked after by 6 or more people, all with different agendas of what it should be and what it should become.

Personally speaking, if you give me enough rope I think I’m a fucking cowboy. I’ve always had an issue with authority and it has brought me nothing but misery and loss. Pop Recs is different. Maybe the only time in my life I can remember screaming without someone or something telling me to stop or gently rocking me to sleep.

Sunderland is an understandably suspicious city. If you have been punched in the face for years, a sudden show of love and affection can be terrifying, and the city I choose to live in simply is not used to having anything nice. There are things that are thrust upon us. The odd farmers market, fun day or whatever. But sometimes you need a something a little stronger than Febreeze on shit.

Before Pop Recs opened its doors the magnitude of bureaucratic naysaying and paper hurdles was pretty huge. We had support and resistance often from the same body. A slow clicking cog of reminders that you’re just this or that. Your achievements vetted and capped. But it did open and within two weeks we saw more shows by Edwyn Collins, one-off collaborations between Bernard Butler, Field Music, and Warm Digits; exhibitions, drinking, plotting and being together in a room. If this was on the South Bank I’m positive people would be throwing money and cocaine at us.

The two weeks we were scheduled to be open turned in two years. Two years of fighting, worry, financial ruin, broken marriages and acute depression vs. the occasional moment of intense belief and satisfaction.

We attracted huge names in music such as James Bay, The Vaccines, Franz Ferdinand et al. (it really is an impressive list). But the real successes were taking part in a tiny little creative eco system. A rabbit warren which was firing off sparks. Some of which I was aware of and even behind, and some I had no idea about until it was too late.

Pop Recs spawned a Poetry group (King Ink). We watched that grow from 4 people on night one to 50 people every night, creating over one hundred new poems and 6 new books. Rhys, our steadfast intern and general whipping boy, grew from a little shit to a little cunt who now plays guitar in Slug. Barry from Sunderland’s greatest ever band (The Futureheads) tutored young musicians in our back room. Cuckoo Writers holed up in our kitchen on Saturday mornings just to write as the Stitch and Bitch, stitched and bitched over crudely made lattes. And it’s here where I start losing myself and not allowing myself to see the wood for the trees. Fighting to keep these doors open and just to live meant that certain things passed me by. Like what Pop Recs had came to mean by the people who used it. That those people are Pop Recs.

Pop Recs is a place where people feel safe. Where people are encouraged and supported to maximise their potential. Regardless of standing, financial or otherwise, there is always a way. People would literally come into the shop and show me their artwork and it would be on our walls the next day. And we would help you hang it and people bought it for real money. We had the ability to remove the many intimidating barriers synonymous with authority.

But it is WOOD FOR THE TREES!

We found out that the building had been sold by our local authority when someone read an article posted by our local paper, posted on twitter. The same day as footage from Pop Recs was used to launch a bid for Sunderland to become European City of Culture. Heinz Fritzl had better manners than that.

It’s only now that the fog surrounding what Pop Recs has meant to people that its necessity is beginning to become clear. To be honest I was done. Psychologically, I was quite ready to collapse entirely. Physically, I was a wreck and with my hand on my heart I, and everyone ever associated with whatever this is, had poured everything into Pop Recs for it to be smashed to pieces.

EVERY group that started at Pop Recs grew.

Then we found a building. Then we launched a Kickstarter. Then people kicked back.

We reached our target within 4 hours and doubled it within a week. What we aimed for got us the bare fundamentals to open on a wing and a prayer. What we have now allows us to buy extras like baby changing facilities, belter seating…a fucking door that works. If people continue to pledge then you’re buying into the idea that this utopian little bastard could be a sustainable reality.

If you stick your head out of the window sooner or later someone is going to slap it. And I’ve been berated and beaten for making grand statements of intent about what we want to achieve. Often I was wrong but sometimes I was right. Punk was a reaction and this is no different. We want to be an embarrassment to the people who have had the ability, time, and finances to create something like Pop Recs. But they’ll never ever have what we have because their job is circulating small plates of biscuits around the same meeting Monday to Friday. Our job is to create a hub of creativity humming with momentum and undeniable to smiling tigers everywhere.

I still don’t know what I’m doing but I know not doing it is not an option. Not now.