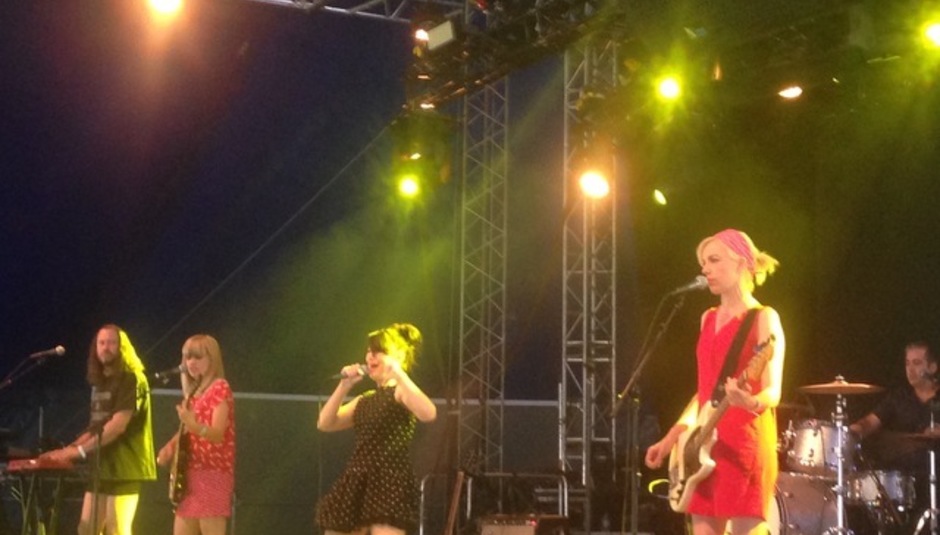 The baffling joy of this heavenly place can barely be expressed without terrifying hyperbole, the old enemy, becoming your guide and crutch. We’re in a vast green clearing at the heart of an ancient forest; ducks line the edges of the glistening lake; thousands of kind, smiling people smile kindly and sport t-shirts proclaiming their love of diversity and gay rights; every food stall is vegetarian or vegan; the beer is tame, ice cold and refreshes like freshly squeezed juice.

The whole experience is jewel-like and, as much as one can deal in terms such as these when it comes to a simple music festival, almost profoundly moving in its lush nature, its progressive thinking, its unifying sense of community. Don’t say you weren’t warned about the hyperbole.

Oh, and there are bands – not the kind booked blindly by a demographically aware money grubber but the kind carefully selected for their relevance, their suitability to such surrounds; their actual brilliance. On the same stage one day previous – this time it’s even hotter, sweat pouring, no relief from wind or shade – Belle and Sebastian appear and immediately deliver ‘Nobody’s Empire’ – perhaps the song that defines them most perfectly, that captures their romantic essence in aspic, sheds further illumination on the ideology of a festival that it would seem needed no further light – “And if we live by books and we live by hope / Does that make us targets for gunfire?” asks Stuart Murdoch before proclaiming “You’re a quiet revolution / Marching with the crowd singing dirty and loud / For the people’s emancipation”. It feels so righteous and empowering you could swear you can taste a minor revolution. Certainly a minor revelation. Either way we move slowly, limbs entwined, the occasional tear dropping, that feeling of being too fucking high (this is NOT a drug reference) too fucking soon? Overwhelming.

At the climax of a joyous set a few dozen dancing fans are brought to the stage to join the band for, of course, ‘The Boy With the Arab Strap’ and the disco fizz of ‘The Party Line’. The stage and crowd blend into a beaming smile. There are Too Many Things and it feels a lot like love.

Earlier in the cool dark respite of the Linne tent we’re greeted by Savages who proceed to show themselves to be a frantic machine of bruised, bullish sexuality and chanting, pervasive violence. You can feel The Birthday Party and The Bad Seeds flowing through them as clearly as you can sense the fury of early PJ Harvey both informing and pulsing at their collective heart.

Jehnny Beth is an iconic figure – her insistent , precise lyrics, her immense presence carrying brand new songs like the furious ‘Sad Person’ to glory as the early afternoon crowd scream approval and support, largely awed by a band capable of such thrilling post-punk in an era when such things seem implausible. Closing the set with ‘Fuckers’ it sounds like real rebellion, like art that’s meant and too angry to breathe – “Don’t let the fuckers get you down / Or steal the thrill of feeling young” – the song is a beast, their performance a teeth-baring, intimate war.

In the same time slot the following afternoon we are privileged enough to witness one of the truly great bands of our age The Julie Ruin, fronted by the genuinely heroic Kathleen Hanna. Hanna is the pinnacle of what a pop star can be – aflame with intellect, imbued with grace, always challenging, eternally inspiring and so fucking talented it could break yer blackened heart. When she talks activism and feminism the crowd screams love; when she talks injustice and the pain of patriarchal bullshit we roar agreement, friendship, support.

A couple of songs torn from her '1998 or was it 1999 solo record/ are rare treats. ‘V.G.I’ with its playful manifesto (“I’m not a genius, more like a genie / granting girls wishes from my stone cold bikini”) and powerfuck chorus make us tingle – playful, teasing fury, Hanna’s whirling speciality.

They have to close with ‘Run Fast’, right? Yes. Yes. Yes. The most moving moment of the album of the same name is brought to brutal flowering here – Hanna’s chilling words (“We gave handjobs quick and always with a smile / So it didn’t get too weird and we didn’t have to die” and “Years later we’d be told we weren’t real punks / By boys in bands who acted like our dads when they were drunk” just fyi) erupting from her, lava-like as the band slice out those sections of minor key resilience. Hanna runs on the spot for an age, pushing herself into exhaustion as the music peaks and crumbles around her. Determination pours out through her sweat, a more perfect kinda world conjured in her staring eyes. You can’t imagine, in a swooning teen-crush obsession, anyone you’d rather be.

Right after there’s a moment sat at the edge of the lake – sun glistening, low level chatter in our ears, an indescribable warmth – when the world feels like it just bursts into widescreen technicolour. Again, no drugs were involved in the making of this review. It’s something about the afterglow of The Julie Ruin, something about this near-magical place; it’s something about feeling your soul swell ‘cos you begin to suspect you might have one.

Fuck you, stop sniggering at the back.

Late at night there are glimpses from the back, peeking in to the overflowing tent; FKA Twigs takes sub-bass to new, loin-tingling levels, dominating the stage, relentless in her pursuit of the most complex, the most dreamlike yet thumpingly real version of R & B; Susanne Sundfor brings the baroque with an enveloping version of her mighty ‘White Foxes’ and is hailed as the Nordic legend she deserves to be. Later still, maybe that night, maybe another there is Waxahatchee at Pustervik, a multi-level club nearby – it’s full but it’s relaxed – it’s kinda labyrinthine, or seems it at this time of night, but Waxahatchee pull us together – those brief but languorous tales of heartache, wanting and needing – all capped with the triumphal urgency of Katie Crutchfield’s plaintive vocal. It’s a short set but one full of charm and impact. It sends us reeling upstairs to the tiny bar that tonight plays home to PINS. Who are fucking excellent. There are so few bands playing with this kind of fire, thunder and DIY glory. PINS are a remarkable thing to experience – fully engineered to facilitate just the right ratio of romance, rage and unadulterated rocknroll that leaves us spent, glowing and strangely energised.

The night is not long enough here but the darkness, the silence after the huge sound - is perfection. Problematic fave Mark Kozelek opens up a Saturday afternoon in the only way he possibly can. He brings tears, he steals cameras and cigarettes, he bemoans his lot in life. He plays a cover of ‘The Weeping Song’ in tribute to Nick Cave’s recently lost son and adds the heart-puncturing detail – when he’d last seen Cave he watched him teach his son how to use a hotel room swipe card.

Kozelek has always been the great unacknowledged talent of a generation – his heart-filling speech of joy and giving at the close of their over-running set is as unexpected and joyous as his songs are unforgivingly lachrymose, touching, eloquent and true.

During the brief but thunderous showers of Saturday afternoon we get the shining funk of Chic; there’s an early-doors burst of Father John Misty who, having made two of the finest, funniest records of the last few years treats us to his full avant-rock star schtick – ‘Only Son Of A Ladies’ Man’ and ‘I Love You Honey Bear’ are obvious highlights but it’s his purposely awkward demeanour (we’re ‘motherfuckers’ in one breath, he loves us in the next) that really wins over the masses here.

Florence & The Machine pour forth the glory and elegance in equal fashion in a perfectly pitched headline set comfortably confirming their arrival as the dominant, serious musical prospect they’ve always promised to be; Pet Shop Boys play their festival cards just right dropping hit after hit in a rapturously received set; Tyler, The Creator is welcomed with just as much love as he bites off a chunk of Way Out West and spits it right back at us with a grin.

After the refreshment of the rain on the final day we finally get to the main event – Patti Smith performing Horses. It’s the largest, possibly most receptive crowd of the weekend and that makes a lotta fucking sense; righteous, empowered, anthemic and striking a trembling balance between sentimentality and forward-thinking spirituality Smith is one of the great performers of our age – one of the rare, true artists able to traverse punk, poetry and protest within the microcosm of a song, a single performance.

Thousands raise their arms and scream along to ‘People Have the Power’ at the set’s close – the ultimate expression of the attitude of this festival, of this artist, of our time spent here and what we’ll take back with us to our own communities, perhaps informing our own political movements and protests.

A walk home through the twilit woods, thereby avoiding the unending shitness of Ride, leads us back to the quiet streets of the city, contemplation of a return next year surely a priority on all the mind of all those departing.

Festivals can be fun, they can suck, they can be plain ol’ brilliant – but Way Out West sits up there with the likes of Primavera Sound and the occasional ATP as a real life experience – something to be treasured and kept close to the heart.

Love hurts, sure Emmy Lou, we know it does, but not in this city, not in this sun, this rain, these woods, with this company, these artists – not ever.