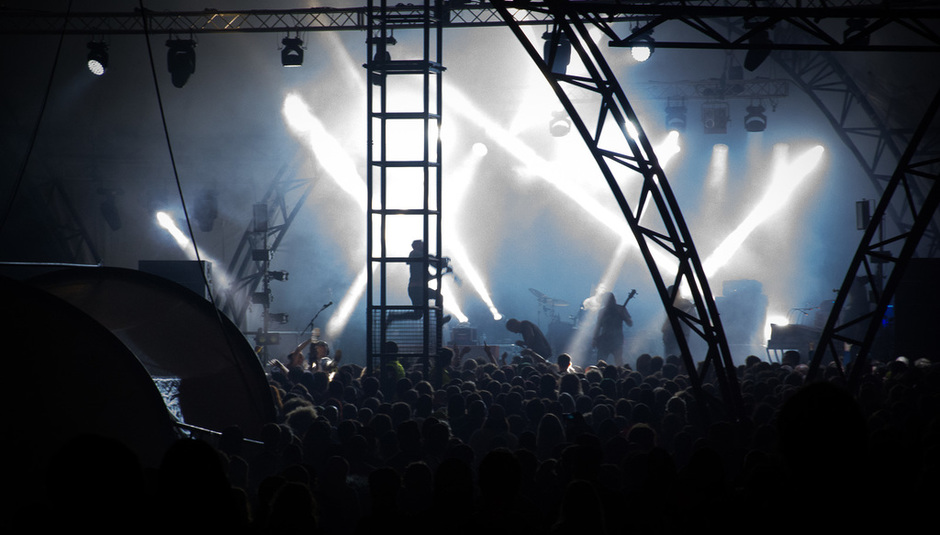 By rights, ArcTanGent shouldn’t work. A festival catering predominantly for fans of math rock and post-rock should be a minor affair, but within three years it has grown into something quite impressive, even if last year the line-up was over-dependent on instrumental acts like headliners Russian Circles and Mono. This year, however, there is the promise of something more diverse, although that isn’t immediately clear when the festival begins.

Thursday night is one dominated by a damp mist that renders most of Fernhill Farm invisible to newly arrived music fans. As I set up my tent the sound of Japanese math titans LITE is audible, cutting through the breeze with the sharpness one would expect of their meticulously mapped out take on a genre not exactly renowned for its looseness and willingness to embrace freedom and change. 65daysofstatic, on the other hand, are the sort of band custom built for playing behind atmospheric shrouds of precipitation. Unfortunately they are in the Yohkai tent, and there are sound issues that cause the band to be late. Whilst ‘Crash Tactics’ and ‘Retreat! Retreat!’ remain massive propositions, the subtleties of newer tracks like ‘Taipei’ and ‘Unmake the Wild Light’ are sadly muddied.

It’s the Friday that demonstrates ArcTanGent’s transition to something altogether less predictable. Certainly there are plenty of “genre-by-numbers” sets that don’t do too much to excite, but throughout the day there are opportunities to see plenty of strange, wonderful, delightfully original bands. There’s Quadrupède, a lively French duo whose sound rests somewhere between that of Errors and that of Three Trapped Tigers. Her Name is Calla are as heart-wrenchingly beautiful as ever, reducing some in the crowd to tears with immaculate renditions of songs that should, by now, have become more widely recognised as classics. The haunting calm of ‘Pour More Oil’ and the cathartic ‘Condor and River’ may perhaps be the finest moments of the festival. At the more aggressive end of the scale We Never Learned to Live are Pianos Become the Teeth-esque emotive post-hardcore of the first order, Rolo Tomassi remain wonderfully schizophrenic and 11Paranoias are a welcome dose of straight-up doom (the heaviness of which need be of no doubt given the presence of Bong’s Mike Vest and Ramesses’s Adam Richardson).

The highlight of Friday’s early proceedings, however, is a main stage set by Manchester’s Trojan Horse A fantastically odd band, imbued with the spirit of Cardiacs but also with a more modern brittle edge betraying the influence of bands like Cave In and Mastodon, this is one charismatic set. Riffs the size of planets duel with falsetto vocals and histrionic retro keyboard sounds, creating a spectacularly unhinged whole. Unhinged is also a word that could be used to describe Friday night headliners The Dillinger Escape Plan Any worries that their headlining an outdoor festival would lead to a less intense set are put to bed as soon as the quintet walk out onto the stage. Ben Weinman is jumping off the speaker stack, Greg Puciato flings himself off the giant pylon in the centre of the crowd, and ArcTanGent attendees lose their shit to one of the great metal bands of the twenty-first century.

Dillinger’s contribution to proceedings has been preceded by two colossal smaller stage headline sets. On the Bixler stage Blanck Mass proves that ArcTanGent should open its doors to more electronica. Thundering low-end drones meet huge towers of psychedelically-tinged ambience to create something both imposing and strangely beautiful. Over on Yohkai, meanwhile, three-fifths of Oceansize combine to play as Vennart (along with Young Legionnaire drummer Dean Pearson). New cuts from The Demon Joke are stunningly anthemic, but it’s the pair of Oceansize classics, ‘Music for a Nurse’ and ‘Build Us a Rocket’, that really wows a crowd comprising of many who thought they would never hear such songs performed live again.

There are points on Saturday when it looks like ArcTanGent is set to fail to live up to the heights of the previous day. There is the characterless bravado of Black Peaks the soporific time signature twiddling of 100 Onces and the pleasant but ultimately rather flaccid tedium of Swedish post-rockers pg.lost. Nestled in between these sets have been gems from local multi-instrumentalist Steve Strong (a rare loop pedal reliant artist worth listening to), caustic noise rockers USA Nails, electronic maniacs Gum Takes Tooth and hyperactive math rock quartet Axes. Things only really kick into first gear, however, when Deerhoof take to the stage. The joy this band injects into a crowd beginning to become weary of the festival site’s never-ending mud is really quite extraordinary. There’s dancing and singing, and a thorough embracing of Deerhoof’s utter commitment to weirdness. Why aren’t this band near the top of the bill of all the festivals they play?

The weather really takes its toll on Saturday night. ArcTanGent has already been torn in two by the fact that sub-headliners Cult of Luna have, thanks to some flight issues, been consigned to playing opposite main headliners Deafheaven take to the main stage. This points to a sharp contrast. The former rely on seriously hefty sludge riffs to make their presence felt, whilst the latter aim for something more spectral. It would be hard to argue against the proposition that Cult of Luna win out, their larger back catalogue making them feel like a more serious headline proposition.

The comparison between these two competing headliners makes for an apt take on ArcTanGent as a whole. This is a festival at its best when combining reflective brute force (whether of the metallic or the electronic variety) with more reflective fare. In putting a line up like this together the three festival organisers – Simon Maltas, Goc O’Callaghan and James Scarlett – have managed to create something that crosses numerous musical boundaries without seeming pretentious or overly serious. In fact, it’s all rather brilliant fun.