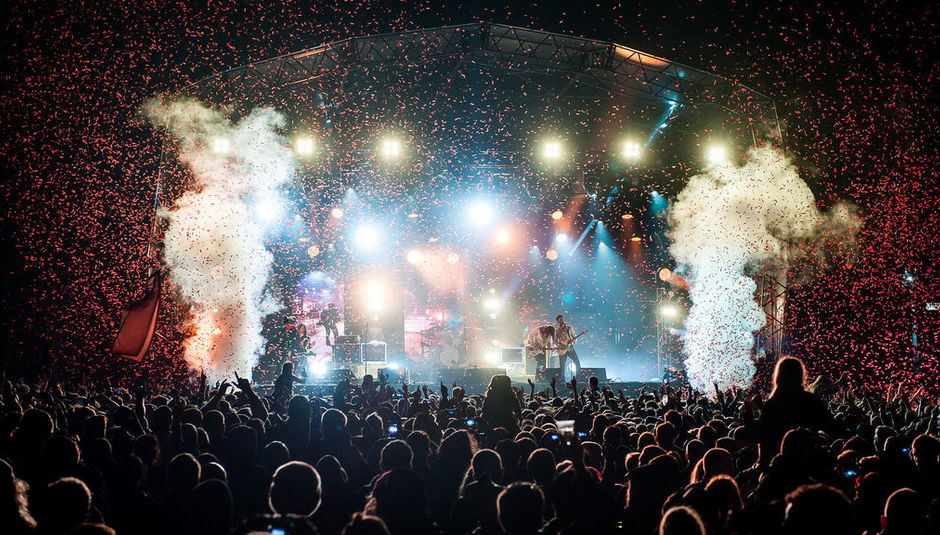 Back in the fields for another year then.

This year the Lake District festival has a special vibe to it. Firstly, like Latitude, Kendal Calling is celebrating its tenth years. It's also booked James to play Thursday evening which is a decent coup considering the festival will be far from full capacity at this point. Elsewhere, British Sea Power return to the tiny Woodlands Stage (I will not be using the sponsored stage name) to play a tiny set at a festival they once headlined. There’s little specks of gold like this littered throughout.

Getting there is the usual queue through the sleepy nearby town of Shap. The locals are standing in the street to see the cars because they only get traffic once a year. You can put this delay mostly down to the rush that most festivals see but it does not help one bit that there’s only a handful of people checking car park tickets or that they’ve changed the on-the-door price from £10 to £15 at the last minute.

Still, the tents are up in no time and we’re giving our newbie friends a tour around Lowther Deer Park. It’s as gorgeous as ever and I immediately clock a full breakfast for £6 from a local stand. That’s every morning sorted. Tonight though, it’s Ghandi’s Flip Flop vegetarian Indian food, followed by James. Obviously I spill some aubergine down myself instantly because I don’t like myself. Whatever.

James are fantastic though. They could headline in their own right with their wonderful back catalogue. ‘Sit Down’ comes mid-set but the real highlights are ‘Sometimes’ and ‘Getting Away With It’. The only real complaint to be had is that they don’t play the untouchable ‘Tomorrow’.

Friday greets us quickly and we bag one of those breakfasts I spotted. They even let me change the black pudding for curly fries. We consume much wine while listening to a nearby tent play some high school indie before we head into the arena for The Levellers, who play loads of tunes that I don’t know but make me tap my feet a bit.

Kate Tempest is, obviously, the first real treat of the day. A reworked version of ‘The Beigeness’ opens proceedings before she flies through cuts from her witty debut. You often wonder if she would better reverting to simply spoken word and this is vindicated a little as she flies into a capella endings to her songs. Still, it’s her music that gives her this platform that her talent so deserves so we’ll keep schtum.

The Vaccines, while bright and energetic, come across like a band parodying indie music. Still, the likes of ‘Wetsuit’, ‘Dream Lover’ and ‘If You Wanna’ are made for festivals and all line-up to be fantastic. ‘Noorgard’ is too brief for a closer but they’ve earned this slot at this point.

A trip to the silent disco is disappointing. In 2014, it was a highlight (thanks in large to Sam Flanagan on the decks) but this year there are two largely similar DJs playing a mixture of pop and dance. We quickly return our deposit and shuffle to the Calling Out stage for the back end of the indie disco which is exactly as you imagine it would be.

We’re at the Chai Wallah for midday the next day to catch Richard Lomax and the Tontine. Lomax wrote and released a song per week last year so he should have plenty of ammunition to fill his set. Despite just being released from hospital, everything is on point and he’s the perfect start to a Saturday at the festival.

Then toLucy Rose who blows all her own material out of the water with a Taylor Swift cover. Chorley psych-peddlers Cactus Knife then play a wonderful set over on the Woodlands and I pay £7 for a measure of Jack Daniels Single Barrel and regret nothing.

Kodaline improve the line-up by pulling out to be replaced by Super Furry Animals later in the day. Though word hasn’t really spread through the site so this is a little confusing. There’s then a rough patch where it becomes apparent that people have died on site due to some iffy drugs and Snoop Dogg has been arrested because he’s Snoop Dogg.

If anyone can lift that gloom, it’s Elbow. They perform one of those sets where they’re out of album cycles so they can just do whatever they want. ‘One Day Like This’ is dropped mega early, they play ‘Newborn’ and ‘Bitten by the Tailfly’, then close on ‘Grounds for Divorce’. It’s celebratory, indulgent and really they’re the perfect headliner for Kendal Calling.

Sunday sees a mid-afternoon start for us as we head over to Jeremy Corbyn fan Billy Bragg. It’s alright being involved with politics but he gets on my nerves a bit with his ramblings here and I actually think Jeremy is great. I’m here for ‘A New England’ and he duly obliges. That Bulmers Colour Arena needs to pipe down though. It’s near the main stage and I can hear it over some of the acts. I miss them play Skepta’s ‘Shutdown’ because I’m getting a burrito and then I hate them ever more.

Snoop Dogg then defies rumours and gets the reaction of the weekend despite being a bit of gimmick and self-parody by this point. You can’t help but smile, laugh and enjoy yourself either way. I see a snippet of ‘I Predict A Riot’ and ‘Pinball Wizard’ as I leave for another stage and that’s enough to show me I’m not missing much leaving Kaiser Chiefs.

It’s at The Sunshine Underground at the Woodlands Stage that my weekend closes. Fireworks erupt in the distance as the small area bounces around to their dance rock. ‘Put You In Your Place’ is a genuine highlight and it’s here, not at the main stages, that festival memories are really made. I have another £7 shot of posh JD. We head back to the indie disco to listen to the same songs as Friday before we depart on Monday morning as happier people.

Another special year at Kendal Calling. A couple of moans are that the little hobbit walkway to the Woodlands Stage appears to be retired and that the beer in the arena was in cans rather than draught. Not that either of those things really takes the shine off what is once again one of the best weekends of the year. Even on Monday, dirty and exhausted, I still don’t want to leave.