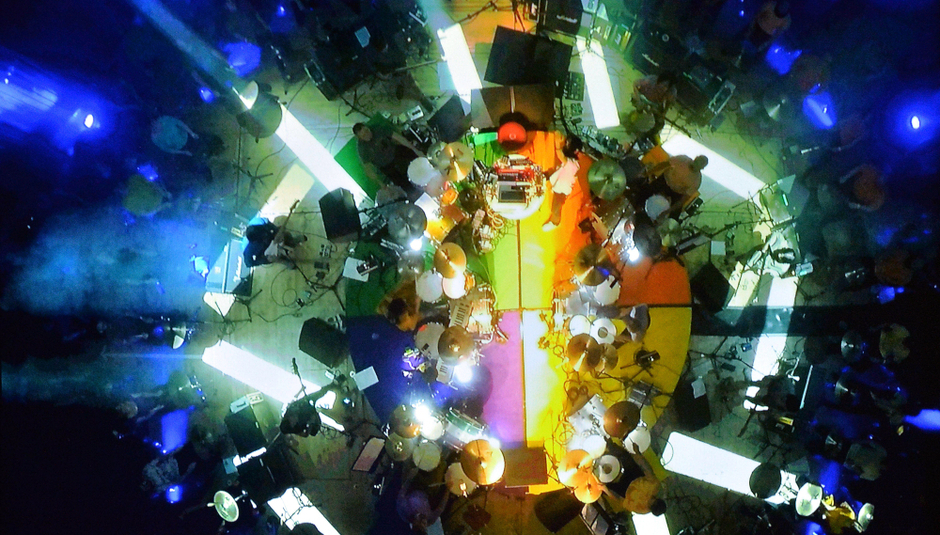 88 Cymbal Players: Beating back the Boredoms

88 Cymbal Players: Beating back the Boredoms

Question: when is a gig not a gig?
Answer: when it’s a piece of experiential performance art held at the Barbican Centre.

Over the decades, Boredoms have worn almost as many hats as they’ve had changes in line-up. They’ve been punk, post punk, rock, no wave, tribal, spiritual, dance, and have seeped into most of the nooks and crannies in-between at one time or other. The one constant in this confusion of sound is Yamantaki Eye (that’s EYE to you and me), the mischievous axis around which every live performance now spins. Since 2007, Boredoms have been experimenting with collaborative sound-scaping and a seeming fascination with palindromic numbers. It all began with the 77 drummers performing for 77 minutes on 07/07/2007. And I assume you can guess what happened on the 8th of August the following year.

Their latest outing of 88 locally recruited cymbal players may not be their largest, but it certainly is a culmination of everything they’ve created so far. EYE was perfect in his role, described before their 2012 ATP show as “less a conductor and more the nexus of an energy orb”. Surrounded by an inner circle of drummers and guitarists, and outer circles of folk sitting at a cymbal apiece ready to smash some healthy hell out of them, EYE became the focus of everyone in the room – be it performer or audience. Like something from a Japanese horror film, his body stretched and contorted in all directions. He drove forward waves of sound that flowed out from his central bandmates, through the cymbal players and out into the crowd. At times it was like the white-noise patter of rain on glass, at times like the angry ocean smashing a pier to splinters. The affect was arresting, the duration a gruelling 150 minutes without pause.

But what is most interesting about Boredoms’ creations is trying to find a meaning behind it all. The hired percussion help, while given a general colour theme to denote their section, were clearly also given autonomy in everything from their playing style to the colour of their socks. The result was a ramshackle mix of free spiritedness (spot the metalhead next to the folk drummer) that completely opposed the rigidity of EYE’s command over each musician. It had a cult mentality, a tribal intensity that some might say left the audience excluded as we sat passively with our free earplugs jammed in and our Barbican brochure balanced on our laps. This is performance art in the subtleties of its curation, in the distance from which it is viewed, in the beautiful artistry of the aerial view TV screens’ light show making the stage feel like a real, live, hyperventilating creature. Boredoms make you wish you were performing with them – that is the power of their creativity and constant reinvention of the sounds they use, be it drumming, percussion, or whatever focus draws their eye in the future.

Will we see a trend of more musicians moving away from the traditional ‘show’? Will there be a move from showmanship and encores to experience and inclusivity?

The arts are forever challenging expectations and stretching our understanding of what it means to create, and what better place to do this than at the Barbican with a group as genre defying as Boredoms.