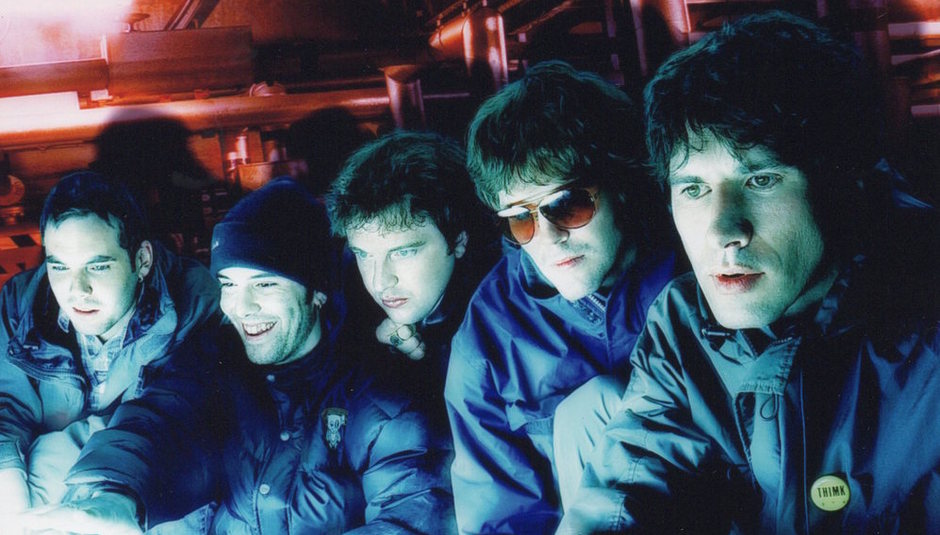 “Creation saw it as some kind of specialist jazz album!”

For the past five years I’ve been on a pop biography mission: to write the world’s first and authorised biography of the Super Furry Animals. It turned out pretty good – Q loved it, Mojo loved it, NME hated it. Hey! You can’t win ‘em all.

The book, Rise of the Super Furry Animals, is out now – and I’ll be damned, the Super Furries are back too, hitting the road and releasing a special edition of their 2000 Welsh-language masterpiece Mwng.

To celebrate the latter, I’ve reopened the crypt of interviews I gathered in the book’s making, to see how another kind of written documentary might work. The result is a talking-heads style narrative on how this earthy, luminous and sometimes apocalyptic record came into being.

You can read all that below. (Oh, and please buy the book. It’s great!)

Gruff: At the time we’d been playing live almost every day for about three of four years, and we were reaching that stage where we could record really quickly as a live band. We had a load of Welsh language songs and just started recording them…

Cian: It was circumstance. We’ve never translated songs from Welsh to English or vice versa, and we had a collection of songs in Welsh. There was enough to make an album, so we put them all together.

Gruff: I used to have a four track recorder and that had been stolen, so I started going up to Gorwel Owen’s [studio] for a day at a time – for social reasons, or at least that was the idea – and I’d throw down 20 songs. It was really basic stuff – guitar, a drum loop, get the song down. So we used a couple of those demos as starting points – songs like ‘Drygioni’ and ‘Nythod Cacwn’.

Cian: We did a few demoes in my living room, like ‘Sarn Helen’.

Gruff: Datblygu were an obvious influence [on Mwng] in that we did a cover version of ‘Y Teimlad’. It’s a beautiful song – the original’s really raw and electronic, but I wanted to bring out the grandeur of the song. I can hear the influence of Meic Stevens in there, who I grew up listening to as a child. I was listening to his acoustic folk records, [and] a lot of records from that era. And there were wider influences as well: we were listening to a lot of American independent music and Tropicália Records.

Gruff: We started recording it in ’99, during the summer when Guerrilla was coming out. We recorded ‘Ysbeidiau Heulog’, ‘Gwreiddiau Dwfn’ and ‘Y Gwyneb lau’ at Famous Studios in Cardiff, over one weekend. Then over the rest of the summer we recorded the rest of the songs, between festivals and things, with Gorwel Owen.

Gorwel Owen: I’ve always found the process ‘organic’ to be honest. I always felt that there were quite fluid boundaries between what various band members and I did. The whole process was different to earlier albums as, although it was recorded very quickly, it was not done in a single block.

Bunf: Much of all I can remember of recording Mwng was a strange desire to be like sterling Morrison from the Velvet Underground: I started to wear check shirts… I guess I must have seen him wearing one in photoshoot. I also decided to not use any of my normal pedals – I think I was always just straight into my amp . I seem to have made my own criteria for recording Mwng but probably didn't explain it to the others!

Guto: It was by far the quickest thing we’d ever done. The idea was to make a record in a week. Not that we’d had a problem with Guerrilla, it was just a case of doing the opposite.

Gruff: Radiator and Guerrilla were really excessive projects; with Radiator we were in the studio for three months unbroken, then another month mixing. And then er… in that sense Mwng was an excuse to do something simpler and more immediate.

Dat: It happened so quick that… I can’t remember it!

Gruff: It was in our first language as well, so everything about it was immediate and simple. Even the sleeve was minimal.

Gruff: Pete went through a lot of ideas for Mwng. His early ideas were very pastoral – there was a woman riding a horse, looking extremely content. I think there were a few horse covers – because Mwng means mane, as in a horse’s main. So originally that was the idea, that it was a kind of horse record.

Pete Fowler: It was a very stripped down album, they recorded it for five grand in Gorwel's place over about two weeks, and it sounded amazing. Quite stripped back, quite melancholy. I wanted to do something that reflected it.

Mark James [Co-Designer, Mwng]: We were working on ideas and came up with the idea of layers and screen printing onto the clear sleeve. The important thing for me was experimenting with the packaging. The decision was made to do everything black and white with white vinyl. Then there was that transparency inside.

Pete: I was thinking about where they'd recorded it at Gorwel's [in Anglesey]. It’s quite a rural atmosphere, and I liked the idea of quite a tough goat, a tough rural creature - but also one that had lots of symbolism to it. There's the devilish aspect of a goat, then phrases like "she's a tough old goat…"

Gruff: Sarn Helen is the old highway that connected North and South Wales. Not much attention is paid to infrastructure in Wales – they shut down a lot of the railways in the ‘60s. I think was kind of a divide and rule policy where they put fast roads from North Wales to Manchester and from South Wales to London – so there wasn’t that much in the middle. Whereas in the Roman times there was a pan Wales highway. So having toured a lot around Wales, it takes five hours to get from North to South and there didn’t used to be many petrol stations – so we’d sleep in vans half way up!

So it was like a weird infrastructure wish list, as a touring band, to revive Sarn Helen. The song was relevant to the touring band!

Guto: My favourite song on Mwng is ‘Ysbeidiau Heulog ‘. It’s got a zoot saxophone, and I hate the saxophone. It’s got a really rough mix: it’s like an old reggae record where you can hear the mutes being pressed on the desk. It’s got loads of phase on it, cool sounds.

Gruff: Songs like ‘Pan Ddaw'r Wawr’ [were addressing the fact that] globalisation is something that’s a burden on the Welsh language – and a lot of indigenous languages I suppose, that are in decline. Around the turn of decades people start getting nervous about the census figures, which almost always show a decline.

Gruff: Then Creation came to an end and it was sort of weird.

Alan McGee: Me and Dick decided to cut out on Creation – we’d achieved our musical dreams. In fact, we should have cut out in ’96.

Gruff: I’ve read on Wikipedia and stuff that they [Creation] turned down the record, but it’s not true – and I’m not sure where that came from. They paid for it, and they were definitely going to release it.

Guto: It wasn’t the end of an era exactly: we were still talking about releasing records, we just didn’t know how we were going to put Mwng out.

Bunf: It was very strange. We felt like we were on our own anyway - it was a bizarre transition because we pre-empted that sort of feeling of being on our own by putting Mwng out ourselves. Maybe if we hadn't done that we would have been panicking a bit more… but we'd set up our own record label, and thought - probably stupidly! - we run our own record label now! So we weren't running round like headless chickens.

Guto: It felt like we almost didn’t need a label anymore: we had a very nice following at that time. Until you realise the true economics of things, that you do need a label!

Gruff: We’d started the Placid Casual label to put out a record by Psycho VII a couple of years earlier, and so we decided to use that name.

Guto: Because the record was in Welsh as well, it was nice that we could control it – after our experience as being sold as a ‘Britpop’ band, we were very aware of how things could get out of your control when it goes out to different countries, different labels.

Gruff: It was fantastic getting to do our own marketing campaign for Mwng. We used all the worst quotes we could find from the bad reviews of Mwng for the advert. It got great reviews but we managed to find some bad ones. Stuff like “career suicide” from the Jewish Chronicle. We put the advert up in the NME.

Alan McGee: They made a fortune because we funded it – it was only about 20 grand – but they ended up selling about 100 thousand copies and keeping the money! Which was lovely for them.

Guto: I think we were well aware that if we’d put Mwng out [as our first album], not so many people would have taken notice. I think we were taking advantage of the fact that we had a fan base who were used to English. There was an audience there waiting.

Gruff: The album sold amazingly – it went to no.11 in the charts. If we’d known it was going to do that well we would have given it a bigger push!

Guto: It was true that the record was commended in parliament. Some Welsh MP stood up and said “I’d just like to say, well done to the Furries for getting an album into the top ten in the Welsh language!” It was bizarre! Quite surreal. The top ten was David Gray and so on at the time.