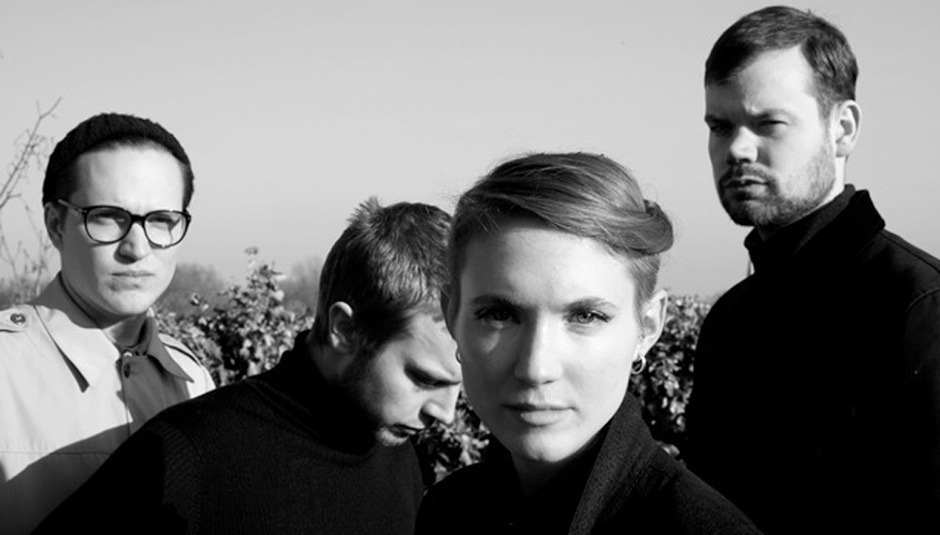 In case you hadn't noticed already, it's Record Store Day this weekend. As ever, there's loads of exclusive vinyl being released in support of your local retailers but we're especially keen on one slab of plastic.

Woman's Hour are releasing their Dancing In The Dark EP, which features their spectral cover of the Bruce Springsteen classic and two new songs. If you adored the aching swells of the Kendal outfit's Conversations, then you'll want to own 'Sea Of Silence' and 'The Shipping Forecast'. To celebrate their impending arrival on the shelves of all good indie shops, we asked the band to rummage through their own LP collections.

Josh Hunnisett: I finally got my hands on this record in 2013. It arrived through the post and my heart started racing. I had listened to the record a thousand times on Spotify, but having the physical copy felt incredible. I first listened to Replica after spending many hours enjoying Returnal, his previous release, and instantly knew that it was going to become important to me.

It’s a VHS world of Anime characters and hazy landscapes, with beautiful melodies being introduced on Roland Juno 60 keyboard. I use the same keyboard and often find myself playing the melody from the opener Andro. My best friend who lives in Canada was over visiting and he regularly complains of not being introduced to new music. We had one too many beers and as we moved onto the whisky I decided to introduce him to Replica by Oneohtrix Point Never. We lay on the floor of my living room, turned the lights off and lost ourselves in Lopatin’s world. Jake is now an avid fan. It’s one of many lasting memories attached to an incredible album.

William Burgess: I must have bought this record in 2004, I was at the Rough Trade West store on a rare trip down to London. I remember having enough money to buy a few records and the artwork to this really stood out and drew me in so I made it my 'pot luck' purchase alongside the more conservative and calculated choice of Hot Fuss by The Killers.

It wasn't a record I initially enjoyed that much, but I felt challenged by it and persevered. If you haven't heard it yet it is full of visceral drums, mushroom-infused-and-possibly-nonsensical vocals, plenty of drones and various other genuinely quite scary sounds to a teenager from Kendal... Quite the antithesis to Hot Fuss. It turned out to be a real gateway drug for me; it freed up a lot of my youthful preconceptions about how music should sound and made me feel empowered. Needless to say it has survived the various cullings my record collection has seen over the years.

Floating Into The Night

Fiona Burgess: The fact that I only came across this record a few years ago still remains something of a mystery to me. Released the same year I was born, I can’t believe it took me 20 years to hear to it. There’s something so instant about the connection I have with her voice, she sounds like an angel drifting through space.

She’s got this amazingly ethereal and delicate voice that transports you into her world. Or rather, the world of Twin Peaks: most of the songs on this record appear at some point in the seminal TV series. The music was composed by Angelo Badalamenti and David Lynch wrote the lyrics. At the time, I hadn’t watched the TV programme (gasp) and it wasn’t until our recent European tour that I watched all two series, travelling from London to Scandinavia we devoured all thirty-something hours of it. I know. Despite the cult following the TV show attracts, this record still seems to be something of a rare beauty.

Fiona Burgess: We grew up with piano music always being played in the house. That, and Radio 4. My Dad plays a lot, usually as a way of winding down after a long day at work. He first introduced me to Chopin’s Nocturnes when I was in my late teens. I fell in love with the delicate way that he played the songs, which were designed to be played late at night.

They had a melancholy mood, and a clear melody floating over the top if it. It is very calming, quiet music. It wasn’t until a few years ago that I had the same connection with a piece of music. I was in my local record store and I picked up Screws by Nils Frahm, mainly just because I liked the cover art. When I listened to it I was transfixed. It was the same feeling I had when I heard the nocturnes; a serene lucidity. I later found out that Frahm had written the music after he had an accident falling from the bunk bed in his studio and broke his thumb.

He had to cancel all his shows and was struggling with boredom, so he spent his time off writing 9 songs with 9 fingers. It’s called Screws because he had 4 screws surgically inserted into his thumb. I listen to it a lot when I need to de-clutter my thoughts, it’s better than any prescription drug.

Death Of A Ladies Man

Nick Graves: I remember a friend of mine talking about a Leonard Cohen album produced (and co-written) by Phil Spector and how Cohen had completely disowned it, calling it “a catastrophe”. This instantly piqued my interest. I could not comprehend how Cohen and Spector’s respective styles and sounds would complement each other and, in all honesty, they don’t! It’s a bloody mess from start to finish; a heady mix of jazz, rock and funk all filtered through Spector’s famed ‘wall of sound’ production.

When it works, as with 'Memories', it feels like the perfect combination but more often than not Cohen is muffled by the lavish musical outlay. Not the best thing you’ll hear from both men, but what makes this album one of my favourites is the story surrounding it and its impact on the musi. Cohen was reportedly barred from the studio by a gun toting Spector before he could complete most of his vocals takes. At times you can literally smell the booze and cocaine dripping off the tracks. I was used to ‘classic’ Cohen singing 'So Long Marianne' and the like, but here he’s drunkenly swaggering about imploring 'Don’t Go Home With Your Hard On'. Brilliant. It’s a record that transports me to a smoke filled studio sometime in 1977 and an infamous collaboration between two troubled men.