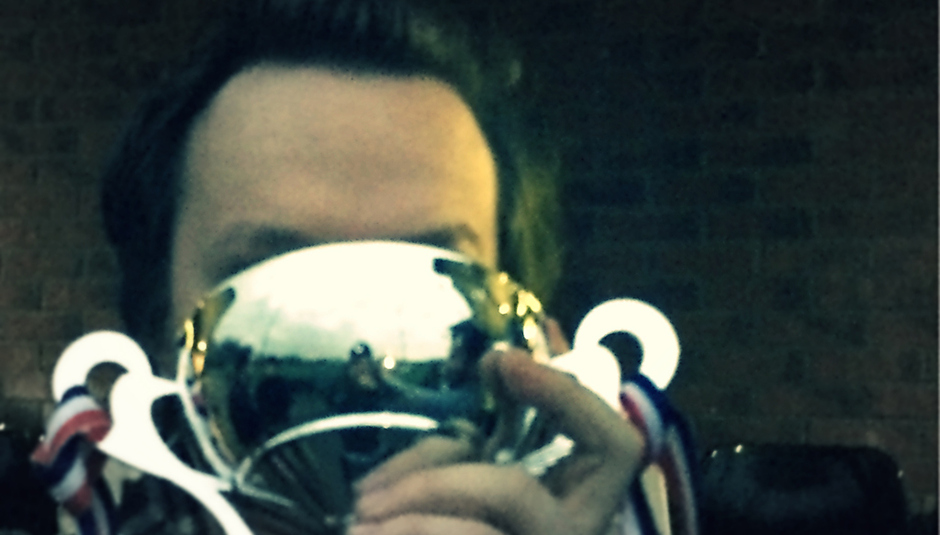 Dutch Uncles' Day Out at West Didsbury and Chorlton FC

Dutch Uncles' Day Out at West Didsbury and Chorlton FC

“Between the five of us, we support three different football teams: Stockport County, Manchester United and City. This season we’ve adopted our local amateur team so we can call cheer on the same side every Saturday without breaking out into any arguments. It’s started to become a regular pilgrimage for all of us and we thought it would be fun to mark the release of our new album by sponsoring their biggest match ever… a quarter final cup tie against against Bootle."

The band documented the day for us... and have given us their album to stream while-you-read:

Andrew Proudfoot: My fifth WD&C game was a chilly away day at Runcorn Town, fantastically backlit by Runcorn's many industrial plants. A bit like if Bladerunner had a football match in it. It's here I met WD&C's press secretary Rob and mentioned the bands mutual love for non-league football and a possible marriage was discussed whilst drawing similarities between lower league football and independent music (it's a labour of love sometimes apparently). Our sponsorship was a no-brainer, if not just for introducing some new people to West and getting some cash in the bar register, which we're very pleased we succeeded at.

Robin Richards: Five minutes before kick-off it seemed like a sensible idea to make sure the Tannoy system worked, so the players could run onto the pitch to our latest single 'Decided Knowledge'. Myself and the club secretary Rob McKay spent this time running to and from the front of the clubhouse and the kitchen, where the Tannoy is kept to try and get the correct song to come through the speakers outside. For a while it seemed like the system would only play the album's "ballad", a song called 'Given Thing' through the speakers, which didn't seem like the most suitable song for the players to proudly hit the Brookburn Road turf for the massive game ahead.

Fortunately, we managed to get it working just in time, and 'Decided Knowledge' blasted out across the ground. Unfortunately, the tight call meant that I missed the first few minutes of the game (I was at the bar getting a well deserved Krombacher following my struggle with said Tannoy). As I pitched up by the dugout (The Management Shack, as our Duncan calls it), with the delicious, cold German pilsner in hand, it was clear that I hadn't missed much action.

Robin Richards: Several injuries or Valentine's day obligations meant that the West Didsbury and Chorlton line up had some familiar faces missing. As the minutes went on Bootle FC were well on top, capitalising on West's weakened team. Bootle took the lead around the 10 minute mark with a neat finish. A few advances, particularly down the right wing presented some openings for West. Striker Adam 'Five Star' Hilton came closet with a long range effort, which unfortunately ended up in the trees behind Bootle's goal. However, the home team ended up ruing the missed opportunities, when just before half time Bootle beat the offside trap to make it 2-0.

THE PENALTY SHOOT OUT

Peter Broadhead: As the players slumped into the changing room after a disappointing first 45, the Dutch Uncles and 5 willing volunteers called the Ultras threw back the last bit of Krombacher and strapped on their boots for we were getting ready for the inaugural O Shudder penalty shootout. As prearranged, the sub keepers of West Didsbury and Bootle had agreed to take part in the shot stopping duties and were already warming up. We were pumped. The crowd swarmed behind the goal and cameras were raised. Who was going to be the hero? Peter (me) stepped up to the hallowed turf of Brookburn Road and executed the famous Pirlo chip penalty… badly. The keeper got a slight touch and turned it off the post. Not a good start. Luckily our opponents were also unable to convert. Next up was Sped, an out and out striker and one of our best chances. He converts! DU 1 - 0 Ultras. Sadly this lead didn’t last long as our tour manager Musco soon levels things up. 1-1.

The next 6 spot kicks from both sides were all poor. Robin “Lizard Skin” Richards and Duncan Wallis produced tame efforts not troubling the keeper and Andrew slammed the ball into row z! The crowd chuckled at the all round masterclass. Now it was sudden death. Michael Coates from the Ultras took the initiative and drove them in front. DU 1 - 2 Ultras! Pressure was now placed on the shoulders of Peter Broadhead, if he misses DU will lose. Ball placed. 3 strides back. Poised. Then after a deep breath and a sudden burst of pure power he sent the keeper the wrong way and the ball trickled into the opposite corner. The crowd roared and he looked up to the sky and blew kisses to the rock gods. 2-2. Pressure was back onto the Ultras and it seemed to get the better of them. The keeper read the shot to perfection and parried the ball safely away from goal. DU now had the advantage and the ball fell to Sped to seize the opportunity…. You could hear a pin drop. But the pressure never got to him and slammed the ball past the outstretched fingers and the DU boys exploded into a frenzy of joy, tears and sweat. We’d won and get keep the trophy we made… Awkward. Nonetheless, It was still held high!

To finish things off in true rock and roll fashion, champagne was popped, sprayed and guzzled down in seconds! Happy Days. This will be one to tell the grandkids.

Robin Richards: The second half started slightly more promisingly than the first, with right back Callum Jones creating a few chances for the forward line to latch onto. Bootle remained on top for the majority of the game though, and made it 3-0 with 10 minutes to go through a well taken penalty (he obviously wasn't watching the half time penalty shootout 'entertainment' for inspiration). When the final whistle went, the West players seemed pretty relieved that the onslaught was over. A proper bad day at the office. At least now they could put their feet up, crack open an ice cold Krombacher and listen to the world premier of O Shudder to take their mind off the afternoon.

O Shudder is out 23rd February via Memphis Industries