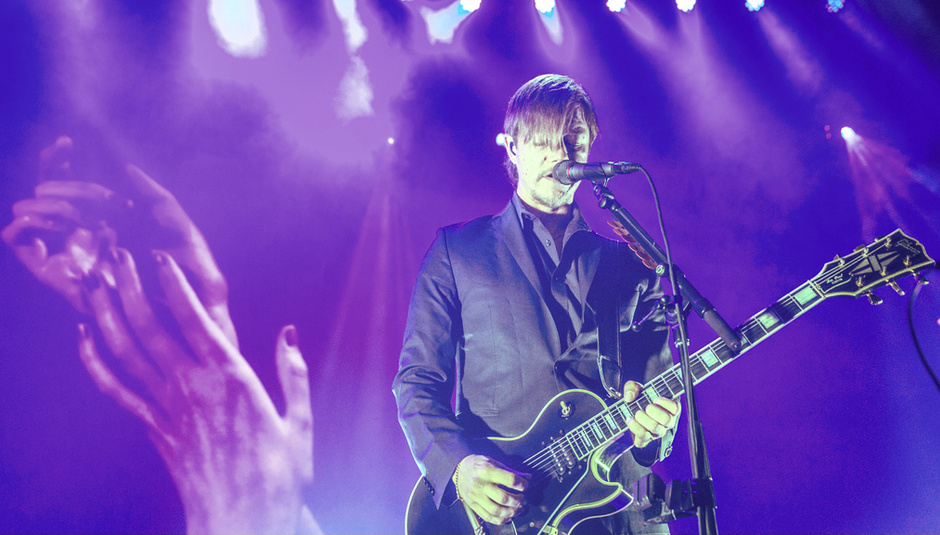 Dom Gourlay: It will be thirteen years in August since Interpol released their seminal debut Turn On The Bright Lights. Despite the obvious reference points (from a UK perspective at least), it felt like a breath of fresh air. A clearly marked line drawn in sand previously bogged down under a weight of preposterous nu metal and acoustic drudgery peddled by testosterone fuelled Americans and podgy blokes on stools respectively. Granted, The Strokes were doing their thing too. But that always felt marginally contrived. And far more indebted to style than musical substance. Interpol on the other hand seemed like the band many of us had spent the best part of a decade waiting for. They seemed like four of us, albeit from the other side of the pond. They listened to the same bands as us. They had the same outsider mentality as us, with that same disregard for following trends. Here was the first musical cult phenomenon of the twenty-first century. In years gone by we'd been blessed by people like Joy Division, The Cure and The Chameleons - all bands whose music clearly had an influence on Interpol's formative years and beyond. That they're also probably the last cult phenomenon speaks volumes for a climate where longevity is deemed secondary to delivering that all-important instant [viral] hit.

Now in their eighteenth year of existence, this weekend's two sold out shows at Camden's legendary 1700 capacity Roundhouse venue represents a band at ease with their status. Buoyed on by one of the most loyal fanbases in music today; people have travelled from parts of Europe and various corners of the British isles to be here this evening. Having spent the best part of twelve months on the road give or take a few weeks last summer, Interpol's live show has evolved into a spectacle in its own right. These days more akin to a special event than a simple straightforward gig, they've become gatherings. Meeting places for those of a similar disparate mindset. Meticulously planned months in advance, there's a feeling of community here very few bands - Manic Street Preachers and Belle & Sebastian being obvious exceptions - can muster. Indeed, it's testament to the sense of anticipation that the venue is already packed to bursting point an hour before showtime.

Many of those are here to see support band HEALTH, making a long-awaited return to these shores after what seems like an eternity away. The LA four-piece play a set split evenly between familiar material of yore - 'Crimewave' and 'Die Slow' setting the scene early on - and newer cuts from their as-yet untitled third long player, which is likely to be out later this year. As with the headliners, HEALTH's reluctance to conform with the format of the day fits in with the whole ethos, making them an ideal choice for openers on this leg of the tour.

Suitably warmed up by HEALTH's incessant concoction of electronic beats and synthetic white noise, the level of pandemonium that greets Interpol's arrival on stage is still a sight to behold. Random surges coupled with elated whoops, arms raised aloft in victorious salute and row upon row of Cheshire cat grins. For the next ninety minutes, they're like putty in the hands of four delirious children. A lesser act would see this as an excuse to go through the motions. Not Interpol. Instead, they rise to the occasion spectacularly. Opening with 'Say Hello To The Angels' from the debut, a song that's regularly kickstarted their set over the past year. Daniel Kessler's swathing guitar coupled with Paul Banks storming vocal delivery set a high benchmark for what follows. And from that moment onwards we're transfixed.

'Anywhere' and 'My Blue Supreme' arrive in quick succession, both demonstrating the sheer tenacity of last year's El Pintor - arguably their finest body of work since Turn On The Bright Lights. Indeed, it's testament to the standards set by the new record that each of the six songs aired from El Pintor is greeted as vociforously as anything from their back catalogue. Be it the glissando shoegaze of 'Everything Is Wrong', pensive 'My Desire' or the rousing 'All The Rage Back Home' that introduces the first encore, all attaining rapturous receptions.

Another newbie of sorts, 'Breaker 1', found itself sandwiched between two surprise yet welcome inclusions on the setlist. 'Lights', the only song played off the band's much-maligned self-titled fourth record and 'Pioneer To The Falls' from its predecessor Our Love To Admire bookending the aforementioned. Interestingly, Interpol seem to have rekindled their affection with that third LP, both 'Pioneer...' and 'Rest My Chemistry' featuring regularly on this tour as well as this evening for the first time since 2008.

Nevertheless, it's the closing salvo that demonstrates why Interpol are still held in such high regard. Antics favourites and long standing live staples 'Narc', 'Not Even Jail' and 'Slow Hands' give way to a double encore that ends with an emotional 'NYC', blistering 'PDA' and frankly magnificent 'Untitled' that leaves mouths aghast and hairs standing to attention. While unlikely to "do a National" and sell out the O2 Arena anytime soon, Interpol remain firmly in control of their destiny. What that future holds remains to be seen, but for now if there's a better live act traversing the planet they've yet to reveal themselves.

A truly remarkable performance that will live in the memory for a long time.

Marie Wood: Anticipation at the rammed Roundhouse tonight is electrifyingly high after last night’s killer career spanning set. It’s also because after 13 years and four albums since their groundbreaking debut, Turn On The Bright Lights, Interpol unlike their most early noughties counterparts, still effortlessly glean a rabid sense of devotion.

HEALTH tonight’s support, playing their first UK show in nearly two years, set out to keep the atmosphere on a knife’s edge with select cuts of the deafening hydraulic drone from 2009’s Get Color. ‘Die Slow’ sounds as fresh as when it was first released and you can’t help but thirst for a time when the band finally returns, although it’s not a sentiment shared by everyone as ‘Eat Flesh’ has more than a few delicate souls fleeing to the safety of spiraling queues of the foyer bar.

As the lights fall to an artery torn crimson and the frantic chords of ‘Say Hello To The Angels’ slice through the crowds to excited screams as Paul Banks chants the hauntingly familiar, "this is a concept, this is a bracelet, this isn't no intervention", it’s clear tonight’s set is not going to disappoint. The cocky cool of ‘My Blue Supreme’ quickly follows careering straight into the euphoria of ‘Anywhere’, which is greeted by second biggest applause of the night. Looking to take a similar shape to Friday night’s set the band then throw a curveball playing the still unnervingly tender ‘Hands Away’; the crowd clap along to the pulsing drum beat as the clasped palms on the screen behind ripple in time.

Back in September, when Paul Banks caught up with DiS’ Rob Leedham he said that there wasn’t “one record that was less good or honest or sophisticated than the other ones” it’s clear tonight that Our Love To Admire and their self-titled album take up the least room in the band’s hearts. ‘Lights’ is the only track that throws a cursory glance to their fourth album and receives an equally muted response from the crowd. Conversely, ‘Pioneer To The Falls’ from Our Love To Admire produces a wistful sing-a-long to the poetic romance of “girl, you fly straight into my heart” and as the guitar solo takes that dramatic dive you wish for more from this underrated record.

The biggest reaction tonight comes predictably for tracks from Turn On The Bright Lights and Antics. The surprisingly large contingents of beer swilling groups of lads shout “oi, oi!” and fist pump along to playful menace of ‘Evil’ and the building rapture of ‘Stella Was A Diver And Was Always Down’. But, that’s not to say the fans tonight are only here to watch a band churning out The Hits as tracks from El Pintor are greeted with the greedy glee of a new love; the thunderous frustration of ‘Everything Is Wrong’ sits seamlessly next to the youthful laments of ‘The New’ and ‘All The Rage Back Home’ has the audience erupt when it opens the first encore.

The three lone notes of ‘Untitled’ start the second encore and Paul Banks, Daniel Kessler and Sam Fogarino stand static in the trademark suits; squint and this could easily be 2002 (albeit for the absence of Carlos D). But, Interpol as tonight’s show has only proved are not a band retreading past glories, they have always been creating new ones. Their sound has remained unwaveringly faithful for over a decade and their words have always had heartfelt relevance. As the final words of “I will surprise you sometime. I'll come around when you're down” drift across the hall, you know that they always will.