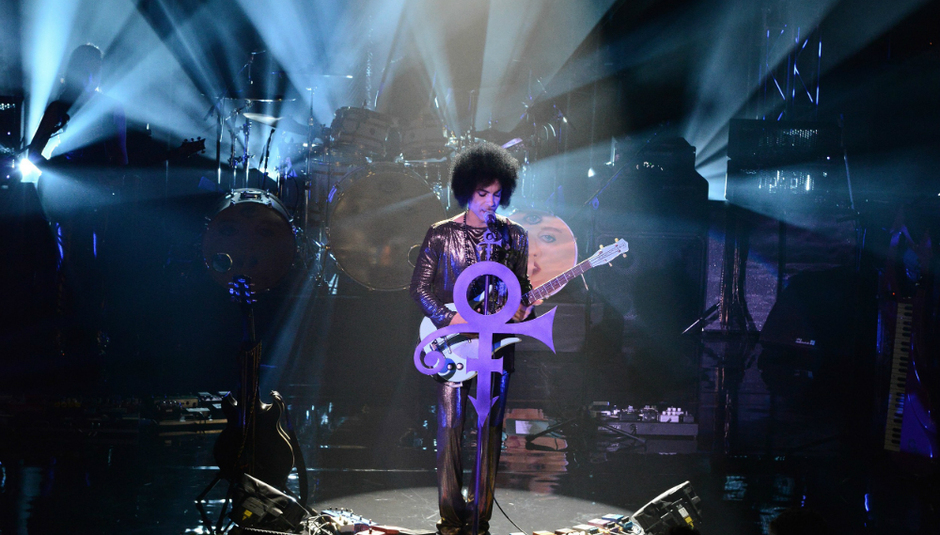 On Monday Feb 2nd 2015, Prince returned to London to perform at Koko. DiS' Marc Burrows won the staff lottery draw and here's his report from the show...

"Prince announces surprise London show" shouldn't be as exciting an announcement as it feels. Last year he was so ubiquitous in the capital you expected to find him in Lewisham Wetherspoons, jamming 'Raspberry Beret' at Thursday's curry club. Yet Prince shows still feel special; he doesn't do anything as dull as booking arenas and selling tickets months in advance: his gigs are hit-and-run Events with fluid setlists and loose running times. You start the day expecting to be in bed by eleven with Radio 4 on, and end it staggering into the snowy night, dazed by two and a half hours of remorseless, unceasing pop masterpieces that you - somehow - never saw coming. And it is in this way that the tiny Purple one - flogging his thirty-year-old hits - stays exciting.

Tonight is a glitzy do booked in aid of the Autism Rocks charity (it doesn't, FYI) and relatively star-studded - if you consider Nick Clegg hob-nobbing with tax-lover Jimmy Carr, and everyone who has ever been on Mock The Week to be stars.

A small gang start chanting the 'I'm So So Sorry' song at Clegg, which is a mildly diverting start to the show, but is instantly forgotten when the artist formerly known as the Artist Formerly Known As Prince takes the stage.

He fucking opens with 'Purple Rain'.

"We're gonna play fourteen hits!" he wails, "and then if you're still here… we're gonna play some more." He delivers on that promise, and then some. And then a bit more.

The first hour is nothing less than the best pop-funk-rock show you will ever go to. You want to hear a big hit? Here it is - 'Little Red Corvette', 'Kiss', '1999', 'Controversy', 'Nothing Compares 2U' (a powered up take on the Sinead version, fact fans.) It's remarkable - Prince himself, decked out in a gold suit, is incredible. From rock-god solos and Hendrix posing on 'Purple Rain', to the ripped falsetto on 'Kiss' and it is all undeniably a-maze-zing!

The show is at its best when it's just the man himself and his 3RDEYEGIRL backing trio: just guitars, bass and drums, meaning the big rock numbers feel tough and the choppy funk absolutely scorches. The middle third, a medley of drum-machine beats and samples, kicks off with the sublime in 'When Doves Cry' and 'Sign O' The Times', before rattling through another forty-minutes or so of second-tier 80s singles. It starts as sprightly and brilliant, though you start to miss the big rock wallop of the earlier set.

The exact point you'd think "if this ended now I'd go home happy" is the exact point Prince considers himself warmed up. He uses the hits to get himself in the mood to really play. The last third takes in everything from last year's 'Plectrumelectrum' and 'The Breakdown' to a storming run at 'Guitar' via fan favourites 'Sometimes It Snows In April' and the 'Let's Work.' All feature extended jams, drum solos, bass breakdowns, little dances, screams for the lights to come up or down, and the general feel of a man on stage having a whale of a time. It's obviously over-egged, but then this is Prince - what do you expect? If you're not on-board with over-egging by now, it's doubtful you ever will be, and the grace with which his band turn and flow is genuinely impressive.

"You guys know we could go all night" says the purple one, "but they're making us pack the gear up." As The Time's 'Cool' stutters to its OTT close, via one-time rival Michael Jackson's 'Don't Stop 'Til You Get Enough,' ("woah," he says "who wrote this one?!") you can see Prince pondering another encore in the wings before being swept away. Frankly, he's done enough.

A Hint of Rage: Laura Marling at The ...