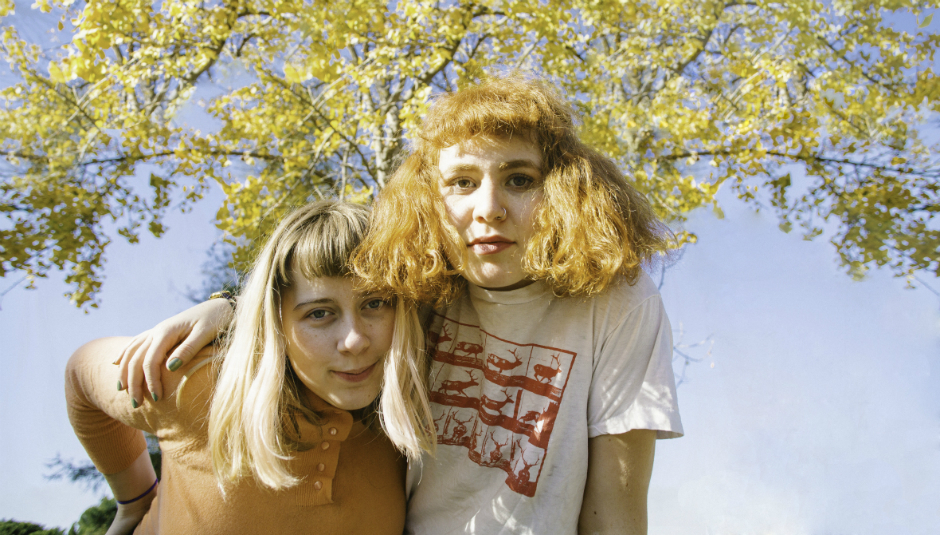 Hello and welcome to a brand new edition of DiS Does Singles.

Today we’ve given a great big thumbs up to Girlpool, who gazumped us with ‘Chinatown’s trembling acoustics. They’ve earned our Single of the Week award and deserve a small chunk of your heart too.

Elsewhere, we’ve got new tracks that are just itching to be heard from Kanye West, Diet Cig and Public Service Broadcasting. Plus, the latest offerings from Torres, Mourn and Courtney Barnett. Go on, have a listen.

Before 'Chinatown', we had Girlpool down as a snotty duo whose blogosphere smash 'Blah Blah Blah' could best be described as grating. Comprised of a paper-thin lick and schoolyard chorus, "I hear you like blah blah blah blah...", we rolled our eyes to the sky as many fellow music fans declared their undying affection for Cleo Tucker and Harmony Tividad. Then we heard their latest single.

The truth about 'Chinatown' is that it's no grand leap forward for Girlpool. Strung together with a rambling guitar line and sheer exuberance, this new 7-inch release is once again about romantic misadventure. "If I told you I loved you would you take it the wrong way?" holler the two friends in emphatic unison.

So the reasons why you may have adored the LA outfit six months before us still hold true. What's changed is that they've mellowed out for the moment. With just enough production gloss to matter and a BPM count that's significantly slower than 'frenetic', 'Chinatown' unfurls its charms with gentle finesse. It wants to be liked whereas 'Jane' and 'Slutmouth' didn't care for such niceties.

Most importantly, Tucker and Tividad are still looking out for themselves above anyone else. They wear their flaws like a sleeve tattoo, and that’s a message that will get you in the end. "If I loved myself would I take it the wrong way?” they yell together with an infectious lack of fucks given.

So we’ve been charmed by ‘Chinatown’ and should have seen it coming. When being proved wrong is this good, who’d ever want to be right?

Kanye West is the greatest musician of the 21st century. This is a fact, just as Pope Francis is a Catholic and the Superbowl is only good for its halftime show. In the past 15 years, Kim Kardashian’s husband has produced Jay Z’s Blueprint, brought back soul to hip-hop with The College Dropout and Late Registration, invented Drake via 808s & Heartbreak, and made My Beautiful Dark Twisted Fantasy - a 10/10 album if ever there was one.

Still, that doesn’t mean he hasn’t made a bad record. Hell, we all remember Graduation. So where does ‘Only One’ sit in Yeezy’s discography?

Without wishing to duck our own question, we’ll say somewhere in the middle. This first single from his as yet untitled seventh LP, is far less abrasive than anything on Yeezus and does a neat line in swooping auto-tuned harmonies. Strip away the Macca-isms and there’s not a whole lot to it.

As a song that’s dedicated to his late mother, we’re sure ‘Only One’ means a lot to Kanye. Whether it means much to anyone else is a different matter.

January is an awful time to release music. Those who enter the new year fray are either caught jostling to be someone’s ‘next big thing’ or swept up in the rush for a Top 40 album - something they’d never achieve in February when people decide they quite like the idea of buying some songs again.

These circumstances go some way to explaining why we’re so fond of Diet Cig, a New York guitar and drums duo who sing about pretty much everything with withering panache. What their songs lack in scale or originality, they make up for in force of feeling. ‘Harvard’ follows on from the similarly scabrous ‘Scene Sick’ by training its crosshairs at an asshole ex-boyfriend.

“Does it feel better to be in an Ivy League sweater?” asks Alex Luciano, while Noah Bowman tub-thumps away with considerable glee. Fingers crossed there’s more fury to follow.

The Other Side (Test Card Recordings)

‘What J. Willgoose, Esq. and his buddy Wrigglesworth did next’ may sound like the title of a WWI propaganda movie, but it’s actually the story of how Public Service Broadcasting made their second record. Not yet familiar with the London-based instrumental duo? Then all you need know they sample archive TV and radio recordings for fun and have made a new concept album called The Race For Space. Also, they’re nerds of the highest caliber.

‘The Other Side’ follows Apollo 8’s orbit around the moon, the first time this feat had been achieved by a human spaceflight, mirroring the mission’s innate tension with wide-eyed bursts of giddy synth and soaring tremolo. It’s intelligent as hell and terrifically ambitious. More than anything, this track made us well up with wonderment.

Mackenzie Scott (a.k.a. Torres) blew up off the back of a Bandcamp album she recorded in just five days. With ‘Strange Hellos’, the Nashville songwriter has clung onto her rough edges and embellished them with seething resentment. The lead single from her forthcoming sophomore album, Sprinter, puts the boot to your eardrums with scorched guitar chords and crashing cymbals.

“Heather, I dreamt that I forgave / But that only comes in waves,” coos Scott at the song’s hushed opening. Next comes the overdrive pedal...

Lxury is Andy Smith, a disciple of Disclosure and moody-looking house music prodigy. Deptford Goth is Daniel Woolhouse, a sensitive electro-soul fellow. Together they’ve made a jubilant pop song that takes one lairy hook and slaps you around the face with it until you’re dizzy and grinning.

Your Brain Is Made Of Candy (Captured Tracks)

A very good music video for a very good song. How often does that happen?